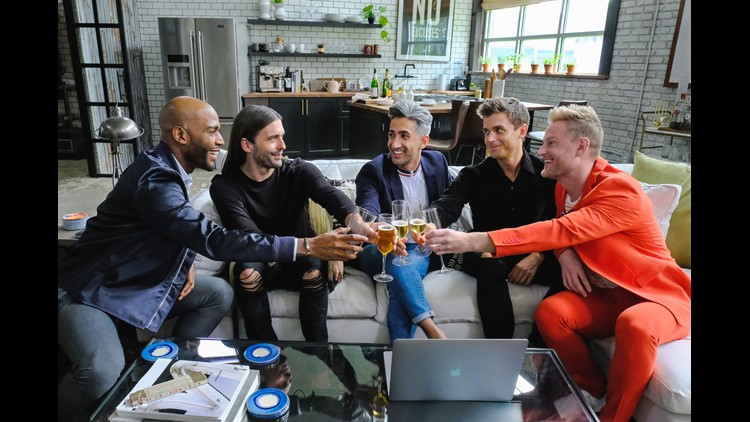 ‘Queer Eye’: Can Netflix's reboot save the world? No, but it's great TV

However, the show is not solely about how-tos for at-home exfoliants or dressing for one's body type.

In the first episode of the revived Netflix series (all episodes now streaming), Tan tells the audience that the original series, Bravo's Queer Eye for the Straight Guy, was about "tolerance." Fifteen years later, "Our fight is for acceptance."

Set in the Atlanta metro area, as opposed to the New York setting of the original, the new series attempts to go further than fashion, as the five men engage their subjects in discussions about Black Lives Matter, religious views on the LGBT community and even the internalized homophobia of a black gay man struggling to come out.

Queer Eye tries to walk the line of balancing entertainment with politics and social justice, but its approach risks making both the social agenda and the entertainment objective fail.

In the new season's third episode, "Dega Don't," this tension comes to a tone-deaf head. The Fab Five are on their way to make over Cory, a police officer and President Trump supporter, when their truck is pulled over. Karamo, who is black, is driving, and he has a tense interaction with the police officer before it's revealed that it's a prank, and the officer is Cory's friend. Later, Karamo and Cory take a long drive together, where they discuss both the Black Lives Matter and Blue Lives Matter movements.

It's powerful stuff to watch: A gay black man and a white, conservative cop talk calmly and intelligently about one of the most divisive issues of our time. Karamo and Cory are strong in their convictions, but they also listen to each other. Afterward, they acknowledge how vital the conversation was, and hope for future conversations between different kinds of people.

However, on closer inspection, the conversation is mostly surface-level, and Karamo is the one who gives the most. In the same episode, the relationship between black people and police is used for a cruel joke, and it all feels artificial.

What doesn't feel artificial? The reveal at the end of the episode that the Fab Five had turned Cory's father's old T-shirts into a quilt. The emotional crux of the episode, and the thing the group can make a dent in, remains in making aesthetic changes to the men's lives.

The staged way the series deals with these issues also comes off in the fifth episode, where Bobby has a conversation with their devoutly Christian subject (also named Bobby), about how the church views the LGBT community. Again, the conversation stays on the surface.

Sometimes Queer Eye's good intentions are more effective. The fourth and best episode of the season finds the team making over A.J., a black gay man who is still semi-closeted. Instantly, the social narrative feels more authentic. The five talk about how they came out and relate their experiences to A.J., who is afraid of dressing or acting "too gay." The episode culminates in A.J. coming out to his step-mother by reading a letter he wrote to his dead father. Specific and yet universal, it feels like a triumph.

Queer Eye is earnest in its attempts to spread a message of "acceptance," but it flounders in the execution, failing to follow through on its promised "wokeness." The entertainment value of the episodes is the priority, and at times the gravitas of talking politics adds to that value.

It's impossible to expect that a TV show could change a country, but in feinting at being more than primp and polish, Queer Eye has made itself even more emotional and upped its own cultural cachet, for better or worse.