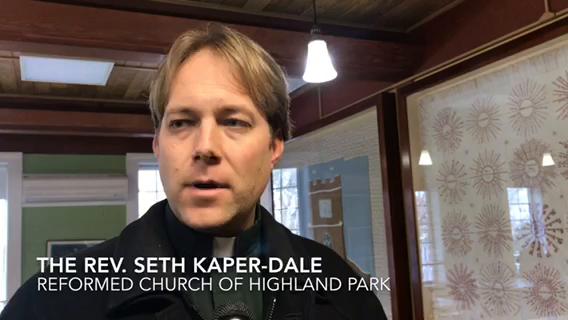 NEPTUNE, N.J. — A day after Immigration and Customs Enforcement agents came knocking at Harry Pangemanan's door, his two U.S.-born daughters returned to the house in New Jersey, escorted by a volunteer, and spotted the front door open.

Then, he said, they spotted the crushed door frame and items strewn around the floor of their bedrooms.

"Whoever did this one, they (did) not just do the damage to me, but I just want to make it known to everyone that they did damage to Americans' lives," said Pangemanan, an immigrant without legal status who on Thursday entered sanctuary at the Reformed Church of Highland Park. "They started destroying my children's lives."

The Rev. Seth Kaper-Dale said Pangemanan's house was one of two ransacked between Friday and Saturday morning. The Edison home of Arthur Jemmy and Silfia Tobing, an Indonesian Christian couple who entered sanctuary in October to escape deportation, was also trashed.

"I don't know what to say," said Jemmy, also an immigrant without legal status. "I'm speechless."

Pangemanan’s two U.S.-born kids returned to their Highland Park house with an escort Friday night to find their front door busted open, Kaper-Dale says. Here are a couple of photos of the ransacking they described: pic.twitter.com/uoQp8WY8zV

The incidents come days after Pangemanan joined Jemmy, Tobing and Yohanes Tasik in sanctuary. Pangemanan was nearly caught by ICE agents as he prepared to drive his daughter to school Thursday morning.

Two other Indonesian Christians without status, Roby Sanger and Gunawan Liem, were arrested after taking their children to school.

Pangemanan, a project manager at the church, has worked since 2012 to rebuild homes destroyed by Superstorm Sandy. He recently received the Martin Luther King Jr. Humanitarian Award from the Borough of Highland Park for his efforts.

"I'm thinking of you guys," Pangemanan told supporters in the church Thursday. "Nothing more has shown me that I belong here in this community."

Kaper-Dale voiced several possibilities about the ransacked homes, ranging from burglaries to ICE searching the place without a warrant.

"Could it be a hate crime? I think that's very likely, and I would hope that the attorney general would explore this as a possible hate crime," Kaper-Dale said.

ICE spokeswoman Jennifer Elzea called the suggestion that ICE had any involvement "patently false" in an emailed statement.

“ICE law enforcement officers carry out their sworn duties daily with the utmost professionalism, in accordance with their training,” Elzea wrote. “To suggest that they would cause intentional harm to property is irresponsible and spreads undue fear in the community, which this individual claims to support.”

Many Indonesian Christians seeking sanctuary in the U.S. arrived in the late 20th century with tourist visas, escaping religious persecution in their native, Muslim-majority country. Many settled in Central New Jersey and New Hampshire.

While they qualified for asylum, many arrived shortly before or after a 1996 law that required potential asylees to apply for protections within a year of entering the country. Local Indonesians said they were not aware of the requirement until much later.

In the years that followed, hundreds of Indonesian Christians across the country were targeted by ICE for deportations.

"They're working hard, doing what they can. They pay taxes," Pangemanan, who came on a tourist visa in 1993, told an Asbury Park Press reporter Thursday. "They have their own insurance. They're not bothering anyone."

Pangemanan said whoever ransacked his house didn’t just hurt him, but rattled his daughters.

“They’re thinking they don’t have anymore safe space(s) for them except my church,” he said.