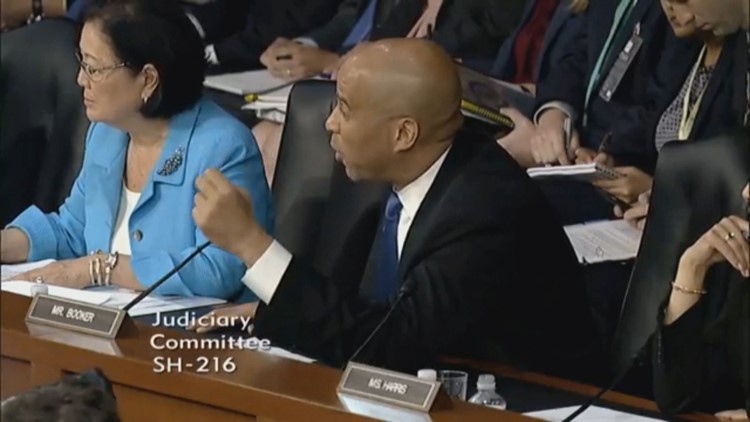 WASHINGTON – Sen. Cory Booker had what will be remembered as his “Spartacus moment” during Brett Kavanaugh’s Supreme Court confirmation hearings this week when he faced down Republicans over the nominee’s contribution to an email chain with “racial profiling” in the subject line.

The 2002 emails were no smoking gun. Republicans, in fact, argued that they showed Kavanaugh working in President George W. Bush’s White House to protect Americans in the months after 9/11 through increased screening of passengers at airports.

But for Booker, a potential 2020 presidential hopeful, the substance of the emails wasn’t the point. Benign as they were, the emails gave him a platform for defiance as he dared the GOP to try to expel him for reading aloud some of the documents that Senate Judiciary Committee’s leadership had deemed “confidential.”

The Democratic senator from New Jersey commanded the spotlight when he slammed what he called a “sham process” by the GOP to put Kavanaugh on a fast track for confirmation. His Democratic colleagues promised to back him up if he was punished for breaking the rules, leading Booker to liken himself to Kirk Douglas, who declared "I am Spartacus" in the 1960 movie classic.

The hearings were a test for Booker along with two other Democrats on the Senate Judiciary Committee seen as potential 2020 contenders: Kamala Harris of California and Amy Klobuchar of Minnesota.

Booker’s declaration Thursday morning came after Harris, in an exchange that went viral on social media, pressed Kavanaugh on whether he had discussed special counsel Robert Mueller’s investigation with a law firm headed by Marc Kasowitz, who has advised President Donald Trump. “You don’t want to tell us,” she chastised the nominee.

Standing up or grandstanding?

The GOP’s response to Booker’s outburst evolved. Initially, a senator questioned whether Booker "deserves to sit on this committee or in the Senate" for what he did. Then the documents he wanted were cleared for release, so they were no longer confidential when Booker put them out. So the response shifted to mocking Booker's "Spartacus" comment and arguing he was grandstanding over nothing.

Booker's team responded by continuing to release more "confidential" documents about issues such as affirmative action in university admissions and Kavanaugh's dealings with a Republican who hacked Senate Democrats' computers throughout the day.

There was no sign, however, any of it had an effect on the outcome of the nomination.

The emails were among of thousands of documents relating to Kavanaugh's service in  Bush's White House that were labeled "committee confidential" by the panel's chairman, Sen. Charles Grassley, R-Iowa.

Within the email chain on screening of passengers at airports. Kavanaugh wrote that he and others favor “effective security measures that are race neutral,” a phrase highlighted by his supporters. But he also appeared to accept the need to start screening before comprehensive standards to prevent profiling were developed, which Booker questioned.

As a committee member, Booker was allowed to read the emails, but he could not talk about or share them unless he asked for permission in advance. That, of course, would have tipped Republicans that Booker would raise profiling at the hearings.

On Wednesday night, Booker broke the first rule, reading from the emails before asking Kavanaugh what he thought about profiling today. Kavanaugh asked to see the email and Booker did not provide it.

Sen. Mike Lee, R-Utah, objected. He said Booker should not be able to ask a witness about a document without the witness being able to see it, and that Booker was quoting a confidential document.

Lee, who has worked closely with Booker on sentencing reform legislation despite their wide differences on other issues, offered to work with the Democrat to make the document public, and Booker thanked him.

Attitudes were more testy the next morning. Sen. John Cornyn, R-Texas, complained that it was "outrageous" Democrats would try to question Kavanaugh about a document he could not see and also that they would not respect a decision President Bush and his lawyer had made to keep legal advice he got confidential.

"It's important that we remind one another that there are clear rules about the discussion of confidential material and that there can be consequences to the violations," Cornyn said.

Booker responded by criticizing the rules and saying he would make the emails public even if that meant he faced expulsion, calling it an act of "civil disobedience." Several Democratic colleagues said they would stand with him.

Cornyn said it was "irresponsible and dangerous" for a senator to decide to release classified information "because you happen to disagree with the classification decision."

"Running for president is no excuse for violating the rules of the Senate," Cornyn said. At another point, Cornyn read a Senate rule Booker may have violated. Booker challenged him, asking if he was expressing "political bluster or sincere feelings."

"If he feels that I, and now my fellow colleagues who are with me, have violated those rules, if he's not a tempest in a teapot, but sincerely believes that, then bring the charges," he said.

Speaking to reporters later outside the hearing room, Booker questioned whether Cornyn was trying to bully him, telling the Texan to "bring it" if he wasn't. Those two words morphed into a Twitter hashtag, promoted by his media team. One tweet combined pictures of Booker with Martin Luther King Jr. and Gandhi.

Now is the time for CIVIL DISOBEDIENCE in the face of extreme injustice. #StopKavanaugh #BringIt pic.twitter.com/8xLRGDWJBI

Bob Bland, co-chairman of the Women's March, a group that staged a sit-in Thursday at  Grassley's office, released a statement saying: “Senator Booker is modeling exactly what we expect of every member of the Senate: we need to stop Kavanaugh by any means necessary."

Kristen Clarke, president of the Lawyers’ Committee for Civil Rights Under Law, said Booker's effort highlighted how “shrouded in secrecy” the confirmation process has been even if the emails did not contain a smoking gun that undid Kavanaugh's nomination. Clarke said the point was that they had been classified to keep Democrats from bringing them up, even thought they contained no information that merited secrecy.

“I think this morning was a game-changer,” Clarke said. “What other information is in the hundreds of thousands of documents that haven’t been turned over? There is a looming feeling there is something they’re hiding.”

Booker had to know that expulsion would never happen when he invited it. To begin with, that penalty requires 67 votes, meaning 16 of his fellow Democrats would have to join in the vote.

More importantly, by the time his office distributed the racial profiling email, the committee had worked with administration lawyers and agreed to waived confidentiality.

"We were surprised to learn about Senator Booker's histrionics this morning because we had already told him he could use the documents publicly," Bill Burk, Bush's records representative on Kavanaugh papers, said in a statement.

Booker's office responded by releasing more documents throughout the day.

“Senate Republicans are doing everything they can to distract from their sham process," Booker spokesman Krisitin Lynch.

“Cory and Senate Democrats were able to shame the committee into agreeing to make last night’s documents publicly available, and Cory publicly released those documents as well as other committee confidential documents today. And he’ll keep releasing them because Republicans are hiding Brett Kavanaugh’s record from the American people,” Lynch said.