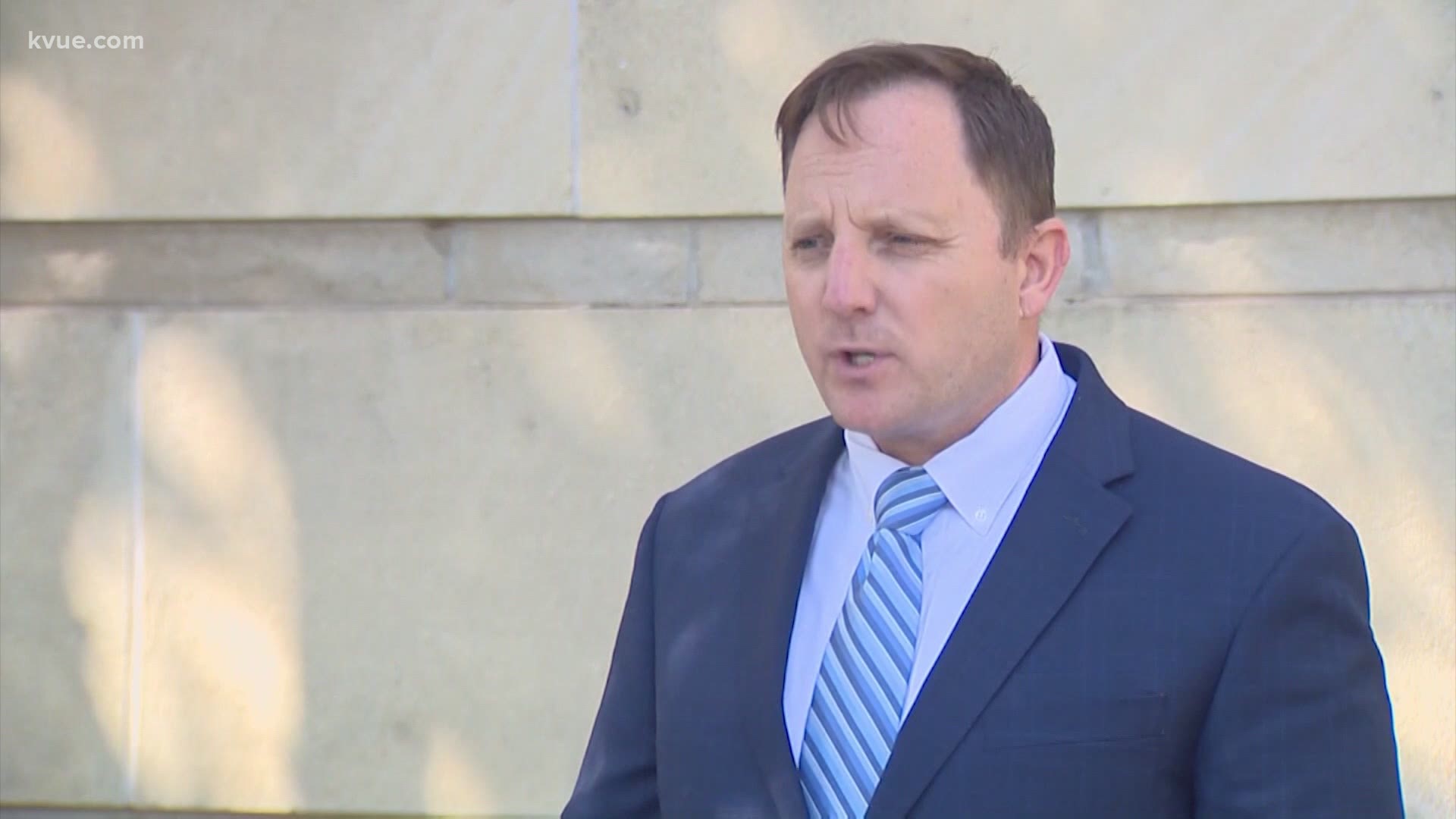 At Monday afternoon's event outside the Williamson County Sheriff's Office, the sheriff stood next to his attorney, Gerry Morris, and denied the accusation laid out in the indictment handed down by 12 people in the county he oversees.

Camera crews from the TV show "Live PD" were filming when deputies chased Ambler after he failed to dim his headlights. Chody is accused of destroying audio and video recordings from that show.

Morris said he was angry about his client's indictment because it was just "baloney," and the Ambler case didn't come to the forefront until the George Floyd case captured national attention. Morris also said claims that his client destroyed critical evidence are boloney.

At the press conference, Chody read the following statement:

"I want to start this news conference by giving some perspective.

This is not my first run-in with District Attorney Shawn Dick. Earlier this year, one of my campaign volunteers was placing yard signs that had been requested by my campaign supporters. While delivering these signs, the volunteer accidentally placed a sign at the wrong home. Understandably, the homeowner was unhappy. But instead of the homeowner complaining, a known supporter of my opponent who lived nearby filed a complaint, claiming 'intimidation.' Since it was an honest mistake made by a volunteer, I expected the matter to be handled quickly. But the DA dragged out the complaint. When I finally asked Shawn Dick for an update, he said he was considering referring the matter to the Texas Rangers or to the Attorney General’s office. I couldn’t believe it. I still have no update on whether an investigation continues. All of this over a yard sign mistakenly placed by a volunteer.

So, you can see how petty our district attorney has been in the past. It's not surprising that he has continued to act in a vindictive and politically-motivated manner by seeking an indictment in this case.

We are now about one month from the election, and the DA is just now acting on a case that is nearly two years old. The facts are very clear and let me be clear: I did not tamper with evidence.

From the beginning, the Ambler incident has been hampered by prosecutors failing to act and then attempting to pass off responsibility for their inaction to others. In fact, it was only after the bodycam video of the Ambler incident was released to the public that the Travis County DA began to move on the case. The DA had taken no action for 19 months, so to try to save herself during a runoff election, the DA blamed me and my office for the delay.

But as I have stated before, our office participated fully in the investigation launched by the Austin Police Department. We exchanged our evidence with them quickly. There is email correspondence that supports my statements. At no point during this process did the DA reach out to our office for additional information.

Why didn’t Travis County District Attorney Margeret Moore call me personally or reach out to me in some other way during that 19-month period if she felt she was having any trouble getting something from me or my office?

The answer is obvious: the Travis County district attorney dropped the ball on the investigation, and when the video surfaced during her campaign, she had to find someone to blame for her own mistakes. It did not work, and the voters turned her out of office.

Contrast that with Williamson County’s Sheriff’s Department. When there is a death, it is a standard operating procedure to have an internal affairs investigation of the officers involved.

We performed our responsibility: We completed our internal affairs investigation. All that remains is for the Travis County DA to complete the criminal inquiry.

You reporters in this room who have covered this issue: Do you know what it could have been that I dragged my feet on? Has anyone ever seen an email or other communication asking me for something that I did not provide in the year after the arrest? Or did you just take the word of a DA facing a losing election that her 19-month delay was my fault with zero evidence?

So, why are we here? We are here because it is a month before the election. Let’s review a few facts regarding Shawn Dick and his performance as a prosecutor.

1. The D.A.'s chief prosecutor has represented my political opponent in the past on a civil matter. Did you hear me? This is a person who is responsible for interacting with the Grand Jury, without my attorney present. This is certainly a conflict of interest.

The DA wants to do damage to a political foe and use the power of his office to achieve it. Would a DA do something like that? Would he really do that?

2. We have emails from the DA, obtained under the Texas Open Records Act, that show him emailing reporters with advice on how to do a damaging news story on the sheriff’s office and certain employees. Keep in mind that these exchanges happened at the same time that he was saying publicly that he was unable to speak because it would compromise his investigation. When a DA gives information to a reporter about a case and even gives the reporter phrases being utilized in the anti-police movements, there’s a concern. In fact, this is not only an ethical dilemma for DA Shawn Dick but potentially criminal as well.

3. There is another email from the DA’s office discussing another case with an outside counsel that is sensitive in nature, yet the narrative tone of that conversation is negative towards the Williamson County Sheriff’s Office. The advice centers around how to get me into the courtroom. Yet another attempt at frivolous criminal charges.

I find it shocking that our district attorney uses his office for his political agenda. The very same people who are pushing this case against me are some of the same individuals who refused to test a bandana or divulge critical evidence, in the Michael Morton case.

Unfortunately, Shawn Dick continues the sad tradition that exists in Williamson County of indicting people for crimes they did not commit. And he does this, by the way, while not pursuing many cases that we hand over to his office.

I have even turned over excessive use of force cases to the DA, and they languish. Instead, he plays politics and uses his office for political infighting. We can see where his priorities lie.

Dick wants to influence this election. He wants to join the chorus of folks who are attempting to undermine law enforcement, strip them of funds, and make our neighborhoods unsafe.

DA Shawn Dick knows there is no possible conviction here. He is pursuing an indictment at this time solely for political reasons. I look forward to prevailing in the election, being exonerated of these false charges, and continuing to protect and serve the people of Williamson County."

During the question-and-answer portion of the press conference, Chody said he would not answer the following question" "If you had a deputy indicted as a result of this investigation, would he be put on administrative leave?"

He also said he didn't want to answer if he thought the deputies acted correctly in the video that showed Ambler taking his last breath because the case is pending.

When KVUE's Jenni Lee pointed out that it was the grand jury and not Dick that handed down the indictment against Chody, Morris said, "The DA controls the evidence that goes to the grand jury. The defense has no right to be in the grand jury or to cross-examine any of the witnesses. We had no idea what went on in the grand jury. The old adage is, 'You can indict a ham sandwich.' This prosecutor once told me many years ago he never lost an indictment. It is easy to get someone indicted."

Dick stated in his own joint press conference with Moore that the timing of the investigation had nothing to do with the election and that the Ambler case was brought to Dick's office in May. When Lee brought this point up, Morris chose not to answer.

He asked a question instead.

"Well, what I wanted to ask you; Is it plausible to you that Shawn Dick didn't know anything about Javier Ambler until May of 2020?"

After that, both Morris and Chody walked off.

He is on the ballot in the Nov. 3 general election with a Democratic opponent, retired sheriff's official Mike Gleason.