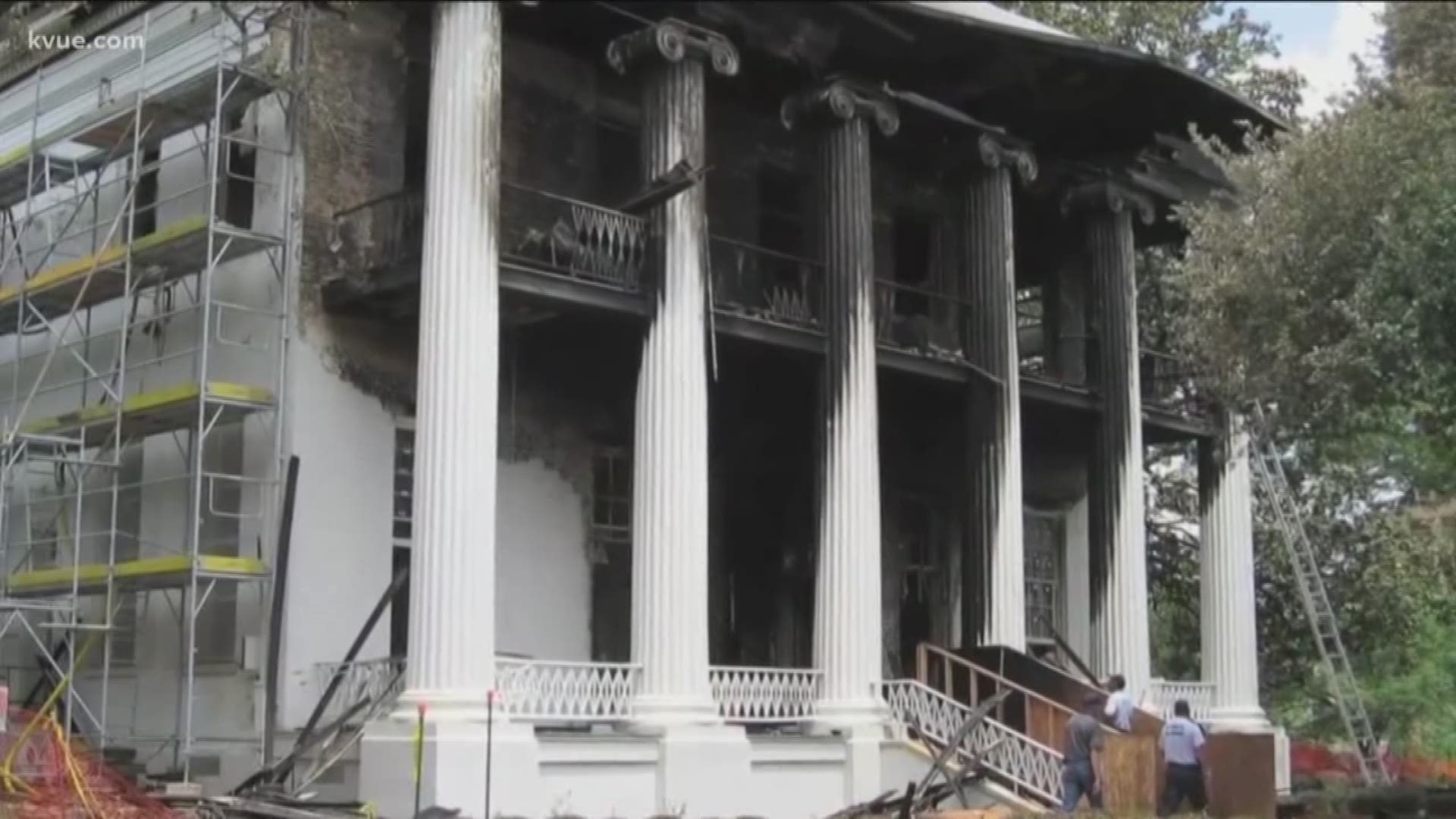 And the night was still warm as a surveillance camera captured the ghostly image of a man running. A grainy video shows him sprinting along the sidewalk in front of the Texas Governor’s Mansion, possibly running away after throwing a Molotov cocktail on the front porch of the building.

As flames spread up the front of the building, history was turning into ashes.

The mansion is one of Austin’s most iconic structures and is located near the State Capitol on Colorado Street. Built in 1856, it is the longest continuously serving governors’ “home” west of the Mississippi River.

Not just for show purposes, the mansion was an actual residence where some of the most famous politicians in the U.S. lived, among them John Connally, Ann Richards, Rick Perry, George W. Bush and larger-than-life Texas legends like Gov. Sam Houston.

But on the night of the fire, Gov. Perry and his family were away on a trade mission to Europe.

Planned renovations had forced the Perrys to move out months before the fire. The mansion had been cleared of its priceless furniture and heirlooms, which had been packed and safely stored off-site. Ironically, those renovations would have included the installation of a fire sprinkler system.

The blaze was a difficult challenge for Austin firefighters: An unusually warm and humid summer night, narrow streets and large oak trees that prevented aerial spray equipment from getting close enough, and construction that had led to walled-off corridors and hard-to-get-to nooks and crannies.

From the beginning, firefighters suspected arson since front porches don’t usually self-combust. The surveillance video would provide confirmation that the blaze was intentionally set.

Video showed the distinct image of a person throwing an object at the front door of the mansion followed by a brilliant burst of flames.

Most of the clues for investigators came from surveillance cameras, including one that had captured the image of a white Jeep that had lingered in front of the building in the early morning hours four days before the fire. The video captured someone in the back seat taking flash pictures of the mansion.

Investigators checked out 3,000 similar Jeeps registered in Texas and were able to locate that specific vehicle and its owner.

When questioned, the owner admitted to driving it while photos of the mansion were taken. He also told investigators the names of the two people who were with him. They were interviewed, too, though all three denied involvement in the case and were never arrested. At the time, then-Texas DPS spokesperson Tela Mange told reporters the agency lacked probable cause to make arrests.

Firefighters eventually won their battle against the flames and much of the mansion had been spared. But it would cost $24 million and take four years to restore the mansion to its original grandeur.

And even as Texans celebrated the grand re-opening on the mansion in 2012, the questions lingered: Who set fire and why did he do it?

We may never know.

Texas has a 10-year statute of limitations for arson cases and the fire occurred 11 years ago. According to a former lead investigator in the case, Travis County Assistant District Attorney Gregg Cox, someone can still be charged with the crime if, during the 10-year period, they had lived out of state. In that case, the statute of limitations “clock” would have been stopped while the person was living outside Texas.

Cox told KVUE News that there’s a slight chance the arsonist could be prosecuted, but he added that “chances are, they got away with it.”

Sixth-grade boys at Virginia school pin down classmate, cut her dreadlocks, calling them 'ugly' and 'nappy'