What it takes to keep Zilker Park looking fresh

Who mows the lawn at Austin's most-loved park? 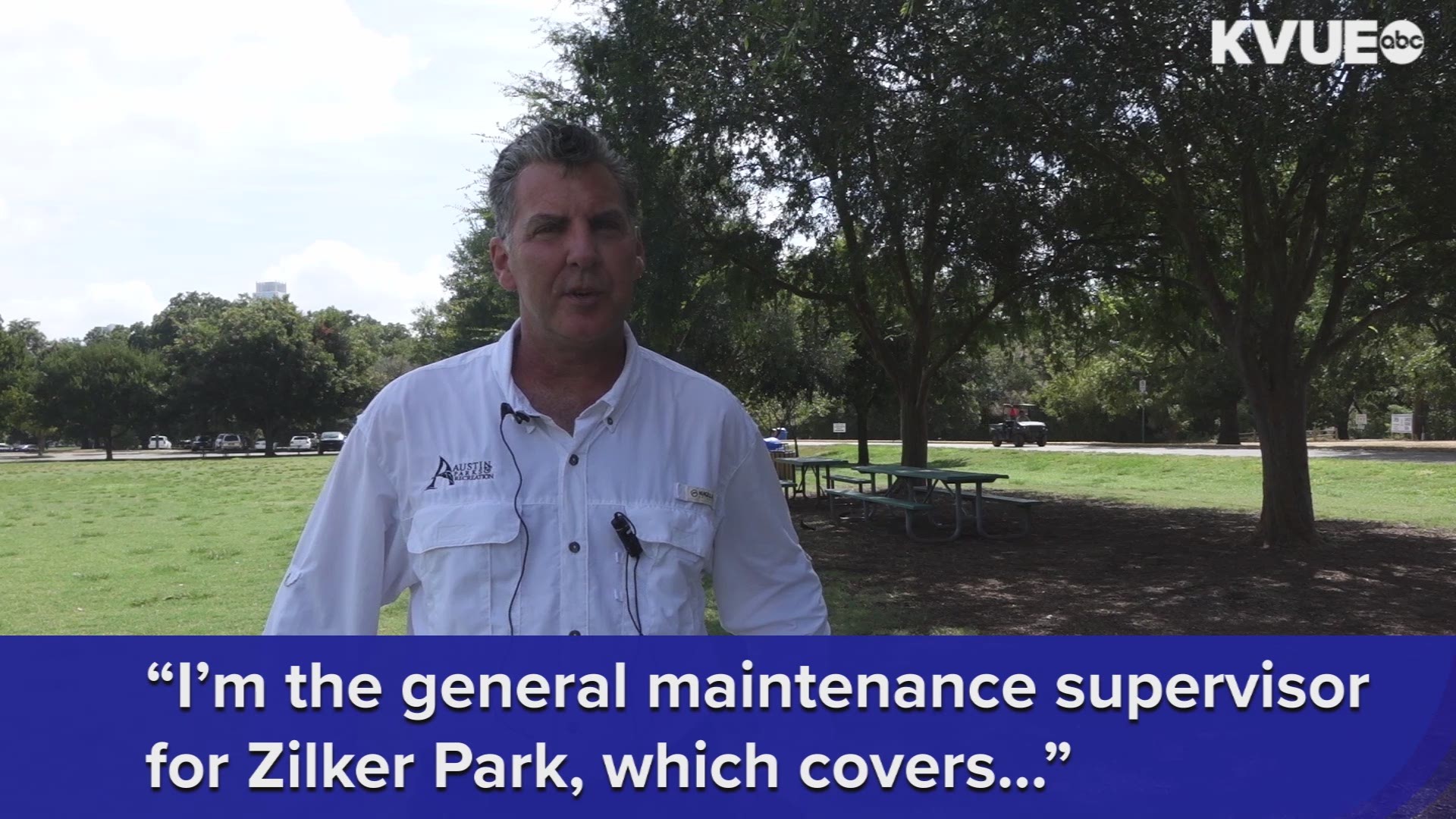 But months before the festival starts, maintenance crews are already busy getting the grounds ready for the onslaught of all those feet.

Outside of Zilker’s Great Lawn, which has its own irrigation, the grass around the park is dead and brown after consecutive triple-digit days with no rain. With the festival coming up, turf crews are tasked with bringing that grass back to life.

That means hauling manual sprinklers around the park to water the soon-to-be “artists’ lounge” area. The grass, which is usually mowed to about an inch high will be allowed to grow out to 3 inches – that makes it a bit more resilient when festival-goers and artists come tramping through.

RELATED: Austin man walking from Zilker Park to Central Park in hopes of inspiring others to make a positive change

But with lake water restrictions in the heat of the Texas summer, only the areas to be used by the festival will be given this tender loving care. The rest of the park will remain brown until the temperatures cool down and rain returns.

Anthony Savage manages the team of 20 who maintain the park daily, picking up trash and litter – and the occasional dead critter – mowing the lawns, watering, fertilizing, weeding, performing repairs and reporting any safety issues.

Even outside of special events like ACL, managing the 350-acre park is no small task. Savage’s team looks after the grounds at the main park area, including Barton Springs and the Great Lawn, as well as Barton Creek Greenbelt, Red Bud Isle, Barton Springs Elementary, Zilker Elementary, Commons Ford and Butler Shores.

With Austin’s booming growth, the challenges of maintaining the park are always changing.

RELATED: Guide: A look at Central Texas parks that offer more than just a view

“The seasonal challenges mainly come from our reservations, one being Barton Springs pool of course, which is on our property, which is extremely busy, the Hillside Theater and people just reserving our picnic areas in the summertime,” said Savage.

The more than 100-year-old park has seen plenty of changes over the years in how its grounds are kept. According to Savage, crews are now moving to mostly natural-based products, especially at Barton Springs Pool.

And like most ACL attendees probably aren’t thinking too much about the grass, if you come to Zilker Park you probably don’t notice the constant care it gets, which means Savage’s team is doing a good job.

1 / 7
Jeff Bell/KVUE
The area known as "The Dump" is where Zilker's trash and litter is taken.

“We feel that we put a lot of effort into keeping Zilker Park really nice and very safe for the patrons, and when they leave there’s someone else coming in behind them,” said Savage. “What you see just leave it how it is – don’t litter, don’t attempt to break anything, don’t do anything unsafe.”

Outside of the day-to-day grounds maintenance, Savage said his team look forward to events like ACL and all the work that goes into getting the park ready for the masses.

“If you work at Zilker Park, you really have to love the park,” said Savage. “It’s different than any other park in Austin. I’ve had the same staff here for years, and most of them don’t want to go anywhere – we’re still one big, happy family.”