Vote Texas: Inside the Austin Propositions on the November ballot

People often say one of the biggest downsides to living in Austin is the cost of living in Austin. And yet here residents are, voting on a potential increase in property taxes. In the past, information about bond projects was a little hard to get, but this time the city is providing details up front about what all that money is for. 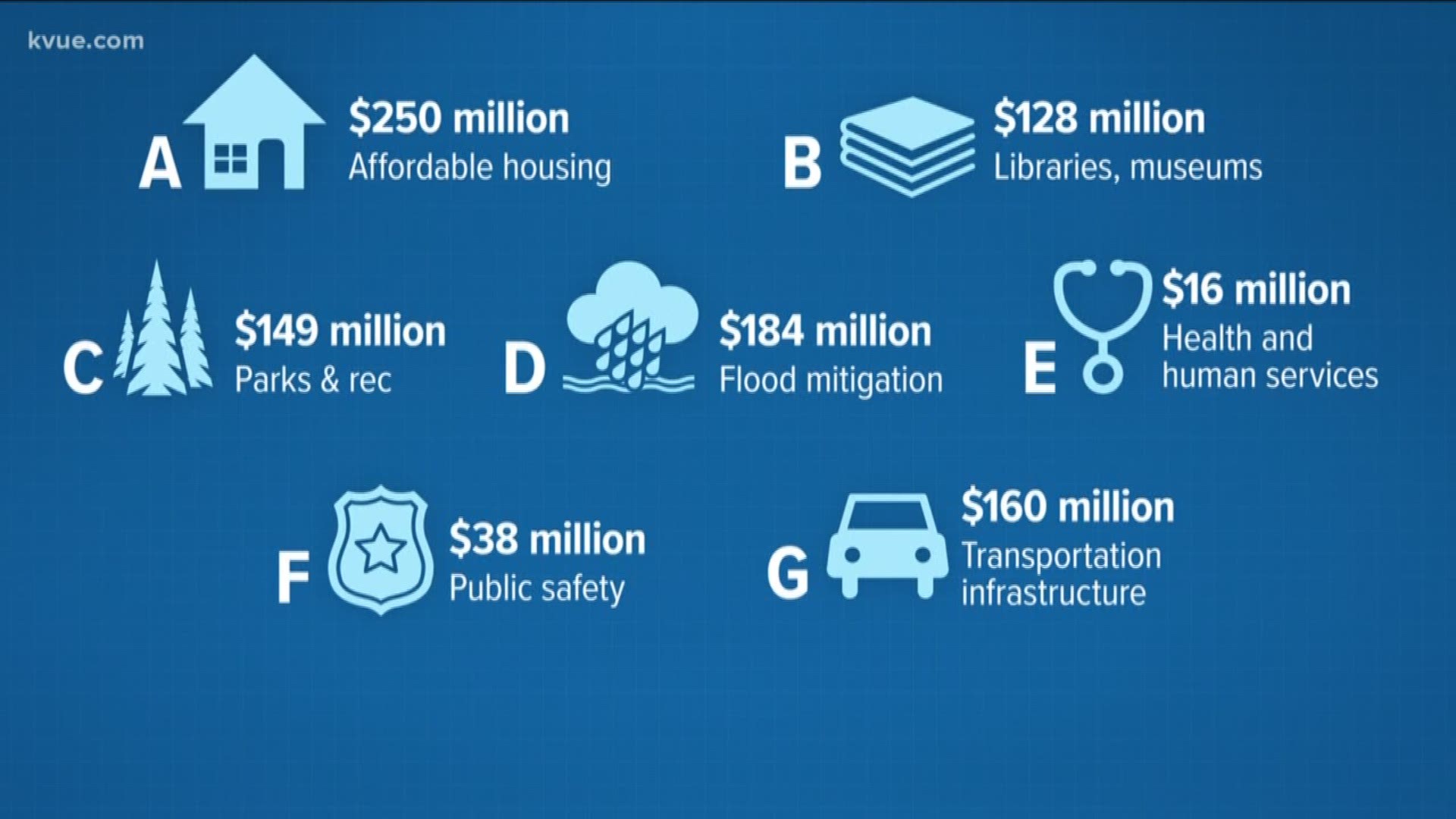 AUSTIN — One of the biggest problems leaders in the booming City of Austin face is one most people can relate to -- there's just not enough money to get everything you want.

Residents expect exceptional first responders, well maintained roads and sidewalks, and beautiful green spaces and libraries, among other things. And while those property tax bills keep increasing, city leaders said they don't have enough money to do it all.

That's where bond propositions come in. Asking taxpayers to pay a little more each month to get more services. Austinites have seven of these propositions on the November ballot which total $925 million.

"It is a bond package, with these propositions that I think truly is a real statement about who we are and what we value," said Mayor Steve Adler in support of the propositions.

If all the bonds pass, Mayor Adler likens the monthly cost to homeowners as a cup of Starbucks. Of course, that cup gets bigger depending on how much your house is worth.

According to the city, the anticipated tax bill impact if all the bonds pass is as follows:

Proposition A is $250 million for affordable housing, broken into the following categories:

Proposition B is $128 million for libraries, museums and cultural arts facilities, broken into the following categories:

Proposition C is $149 million for parks and recreation, broken into the following categories:

Proposition E is $16 million for health and human services, broken into the following category:

Proposition F is $38 million for pubic safety, broken into the following categories:

Proposition G is $160 million for transportation infrastructure, broken into the following categories:

Click here to read more about the bond propositions.

The propositions really come down to voters and money. Two other propositions though, are a little more about philosophy.

By now, everyone in Austin has heard the words Code Next. You may not know what it is, but you know it caused some drama. One result of that is Proposition J.

Judge rules CodeNEXT petition ordinance must be on November ballot

Code Next is the re-write of the city's land development code, a manual of sorts that dictates what and where things can be built in the city. The last time the city rewrote it was back in 1984, so past city councils started the process of re-writing it.

The version presented to the community earlier this year didn't go over too well with a lot of residents. So much so that thousands of them signed a petition, asking the city council to pass an ordinance that stated before Code Next, or any other re-write, could go into effect residents would get to vote on it. The council didn't do that, which led to a court fight. And now the ordinance is on the ballot for the people to decide if they want to weigh in or let the council handle it.

The exact language of Proposition J is as follows:

Shall a City ordinance be adopted to require both a waiting period and subsequent voter approval period, a total of up to three years, before future comprehensive revisions of the City’s land development code become effective?

Then there's Prop K. In short, a group of Austinites started a petition because they want an independent third party to come in and audit how the city spends its money. They got thousands of signatures and now that, too, is on the ballot.

The exact language of Proposition K is as follows:

Without using the existing internal City Auditor or existing independent external auditor, shall the City Code be amended to require an efficiency study of the City’s operational and fiscal performance performed by a third-party audit consultant, at an estimated cost of $1 million - $5 million?

There are two other, less controversial, propositions on the ballot as well, H and I. They are referred to as housekeeping matters. The language is as follows:

Shall the City Charter be amended to provide that the term of service and process for removal of the Planning Commission members be determined by ordinance?

Shall the City Charter be amended to make non-substantive corrections to grammar, typographical errors, capitalization, punctuation, and sentence structure; and to change or remove charter language that is obsolete?