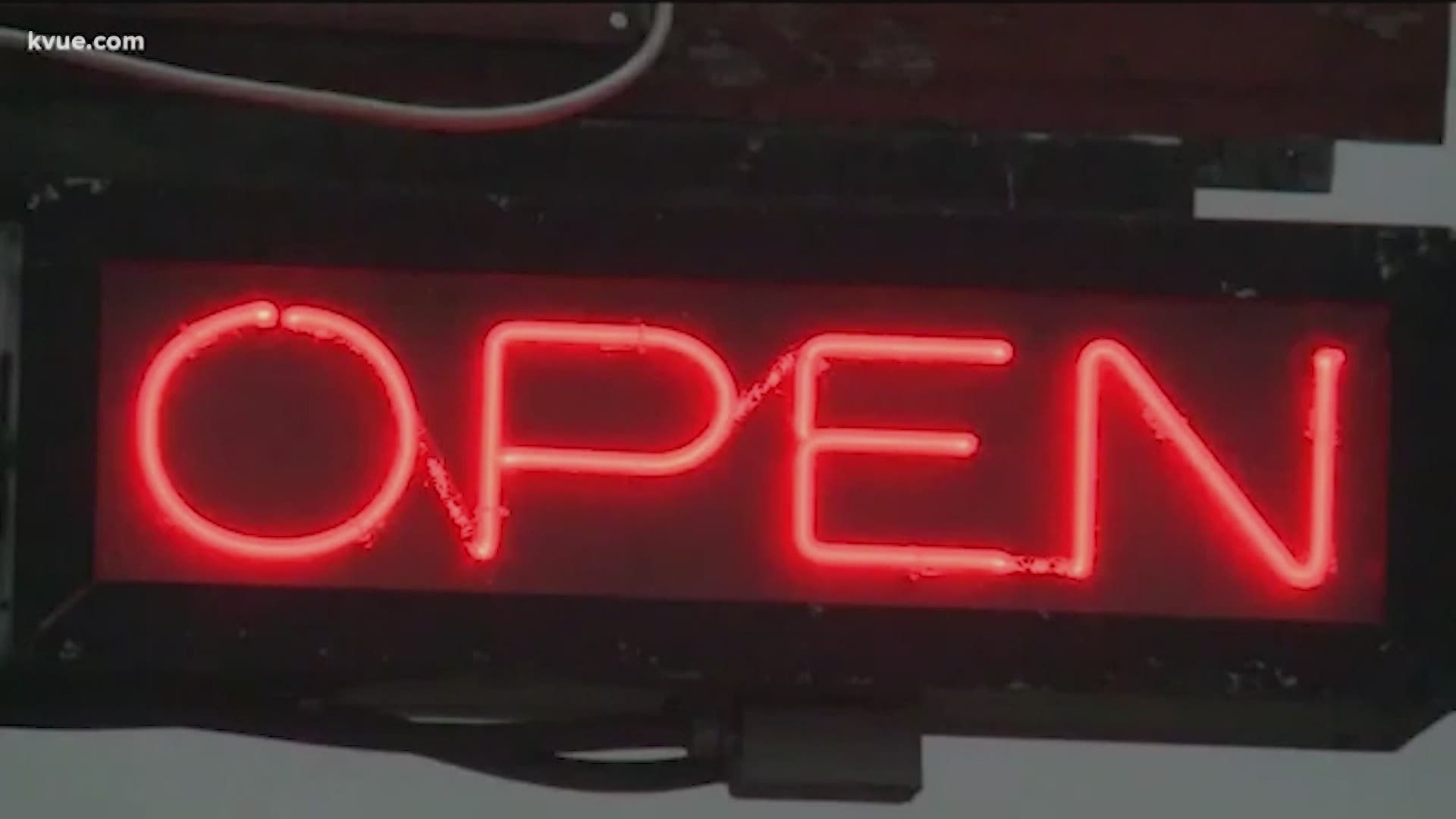 AUSTIN, Texas — There were a lot of celebrations after bars were allowed to reopen their doors on Friday, but some people are worried about seeing packed bars on social media.

Mayor Steve Adler tweeted on Sunday, "Please [keep a] 6 foot social distance and wear a face covering to give the governor's reopening of the economy the best chance to succeed and last."

"We never experienced this before. We've never been shut down like this before, so you really don't know what's going to happen," said Michael Girard, the owner of Speakeasy in Downtown Austin.

Girard said he's happy with the way things turned out for his bar over Memorial Day weekend but knows there could be changes for others.

"Now that it has happened, I'm sure that there will be a lot of meetings this week on how to revise their operating strategy, and was it safe enough? What do they need to do to make it safe," said Girard.

Some owners chose to keep their bars closed during the weekend to give themselves ample time to make any necessary changes.

"There's obviously a lot of safety protocols that they put in place. And we want to make sure that we were doing it right before we opened. And we kind of wanted to gauge the temperature of the street, the crowd. And I think we have a better handle of it now," said Ash Seth, who co-owns several bars in Austin, including Parlor Room and Bungalow on Rainey Street.

He replans to reopen his Rainey Street bars this Friday. He said all of his employees will wear a mask, and a member of his staff will go around to make sure people are being socially distant. But he understands if some people are hesitant to head out to a bar so soon.

"Some people want to come out. Some people don't like what they're seeing. End of the day, it's up to everybody and how they feel," he said. "If they don't feel comfortable yet, that's totally up to them. And that's fine."

People have their complaints on social media about some videos of packed outdoor bars in Austin. To clear things up, an updated version of Gov. Greg Abbott's guidelines, published on Friday, says there's no occupancy limit outdoors at a bar.

Girard said bar owners are trying the best they can, and it's not only bars where people need to comply with the social distancing rules, but other places, too, like parks, stores and lakes.

"I'm not sure why the bars are singled out in that manner. I've seen some pretty large crowds at the plant nursery at Lowe's," Girard said. "We really need customers to participate, you know, it is a matter of personal responsibility also."

Girard said bars are still feeling their way through the new rules and hopes people can understand that.

"The bar owners will respond and respect the rules that we're given right now," said Girard.

Mayor Adler told KVUE on Monday he wished Abbott's guidelines were stricter because they don't require people to wear masks or socially distance.

"I think that the governor would have a much better chance of having his reopening plan work if he was also strong on the fact that people should maintain the social distancing and wear face coverings and incorporate that into his order, rather than just saying that he would prefer people to do it," Adler said. "I wish he was telling people that it was the right thing to do. And you need to do it because I think that some people need to hear that in order to believe that it's actually something they should do."

The TABC released the following statement on Tuesday:

"TABC agents did respond to multiple potential violations statewide, each of these was resolved without formal action through education and informal warnings. Agents continue to investigate potential complaints and are working with local officials such as police and code enforcement to gather information. Our goal is for each business to be given the opportunity to comply with Gov. Abbott’s executive order, though the agency could take formal action in the event of a repeat violation or an imminent risk to public health.

One other thing. Social media videos of potential violations can be an important tool in a TABC investigation. In many cases, these videos, along with media reports, help TABC determine whether an investigation is needed. While a social media post or video does not always prove a violation took place, they can help TABC agents learn what actually occurred during the follow-up investigation."

'It was because of his disability.' Lockhart community rallies for man fired from Walmart