VERIFY: Did the U.S. gov. pay NFL players to stand for national anthem?

A viral image with a wild claim is making the rounds on social media. Is it true? 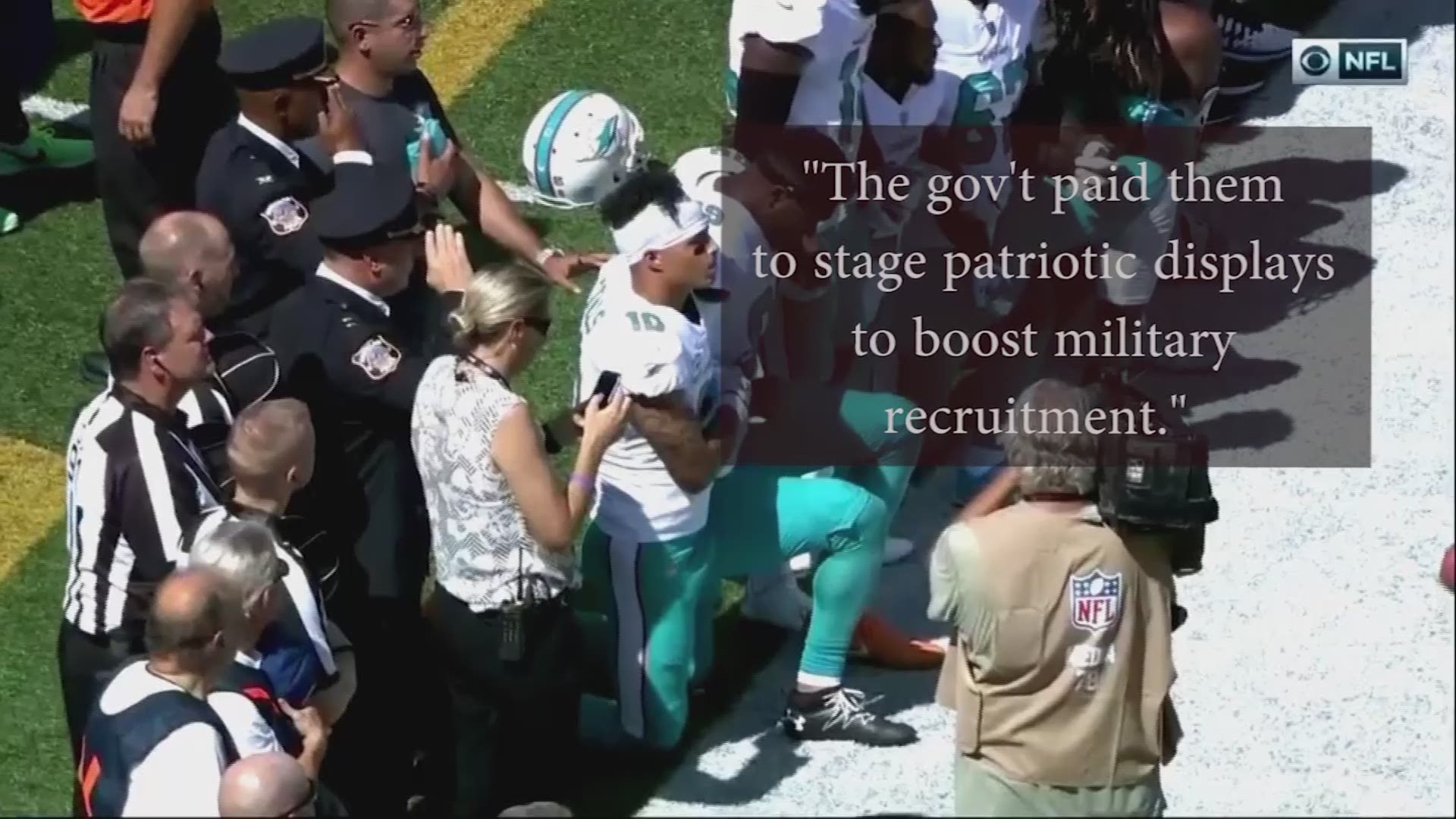 It's a viral image with a wild claim.

"NFL players only started coming on the field for the National Anthem in 2009.

The reason: The govt. paid them to stage patriotic displays to boos military recruitment.

The Department of Defense and the National Guard paid the NFL a combined $12.3 million between 2011 and 2015. So the next time you think NFL players should stay out of politics, just remember that politics injected itself into the NFL first, and these players never got a say in being used as army recruitment tools."

The statement is overall false, though it does include some factual information. To break it down further, we spoke with former NFL player John Haines and used statements from Pentagon Spokesperson Army Major Dave Eastburn.

When Haines, who played for the Minnesota Vikings and Indianapolis Colts, read the text, his immediate response was, "That's crazy."

He added that the message made "no sense."

According to Haines, during his time in the NFL in the 80s, he was expected to be on the field for the national anthem and even had training for how to stand and look appropriate.

He said the claim that "NFL players only started coming on the field for the national anthem in 2009," is "completely false."

"I think you can go look at any game film," he said. "We're out there before the game starts. You run on the field, you have the national anthem, kick the ball and good to go."

KVUE reporter Jason Puckett asked Haines if he'd ever been paid or received incentives to participate in the anthem and responded, "No. No one's paid us, no one did anything other than say, 'Here's what we're asking you to do.'"

Pentagon Spokesperson Army Major Dave Eastburn gave a statement to CNN in 2017 that backed up Haines comments. He said, "The DOD does not require or request that athletes be on the field during the playing of the national anthem when military members are part of the patriotic opener."

KVUE can verify the claim that NFL players only started coming on the field for the anthem in 2009 is False.

The second part of the text, however, did have truth to it.

Republican Sens. Jeff Flake (R-AZ) and John McCain (R-AZ) released a statement on an investigation into DOD payments for "patriotic tributes" between 2011 and 2014.

Their statement in part said:

"clearly show that DOD paid for patriotic tributes at professional football, baseball, basketball, hockey, and soccer games. These paid tributes included on-field color guard, enlistment and reenlistment ceremonies, performances of the national anthem, full-field flag details, ceremonial first pitches͕ and puck drops. The National Guard paid teams for the “opportunity” to sponsor military appreciation nights and to recognize its birthday. It paid the Buffalo Bills to sponsor its Salute to the Service game. DOD even paid teams for the “opportunity” to perform surprise welcome home promotions for troops returning from deployments and to recognize wounded warriors. While well intentioned, we wonder just how many of these displays included a disclaimer that these events were in fact sponsored by the DOD at taxpayer expense. Even with that disclosure, it is hard to understand how a team accepting taxpayer funds to sponsor a military appreciation game, or to recognize wounded warriors or returning troops, can be construed as anything other than paid patriotism."

While KVUE can verify that DOD and the National Guard did spend money on "patriotic" events at NFL games, there is no connection showing they ever paid or required players to be involved. That coupled with the fact that players participated in the national anthem long before 2009 allow us to say the entire statement is false even though some of it's elements are factual.