"I told my husband like, 'What if we're those people that don't say anything about it and then somebody else's child actually does have an allergic reaction from it and they die from it? I would feel terrible,'" Bellinger said. 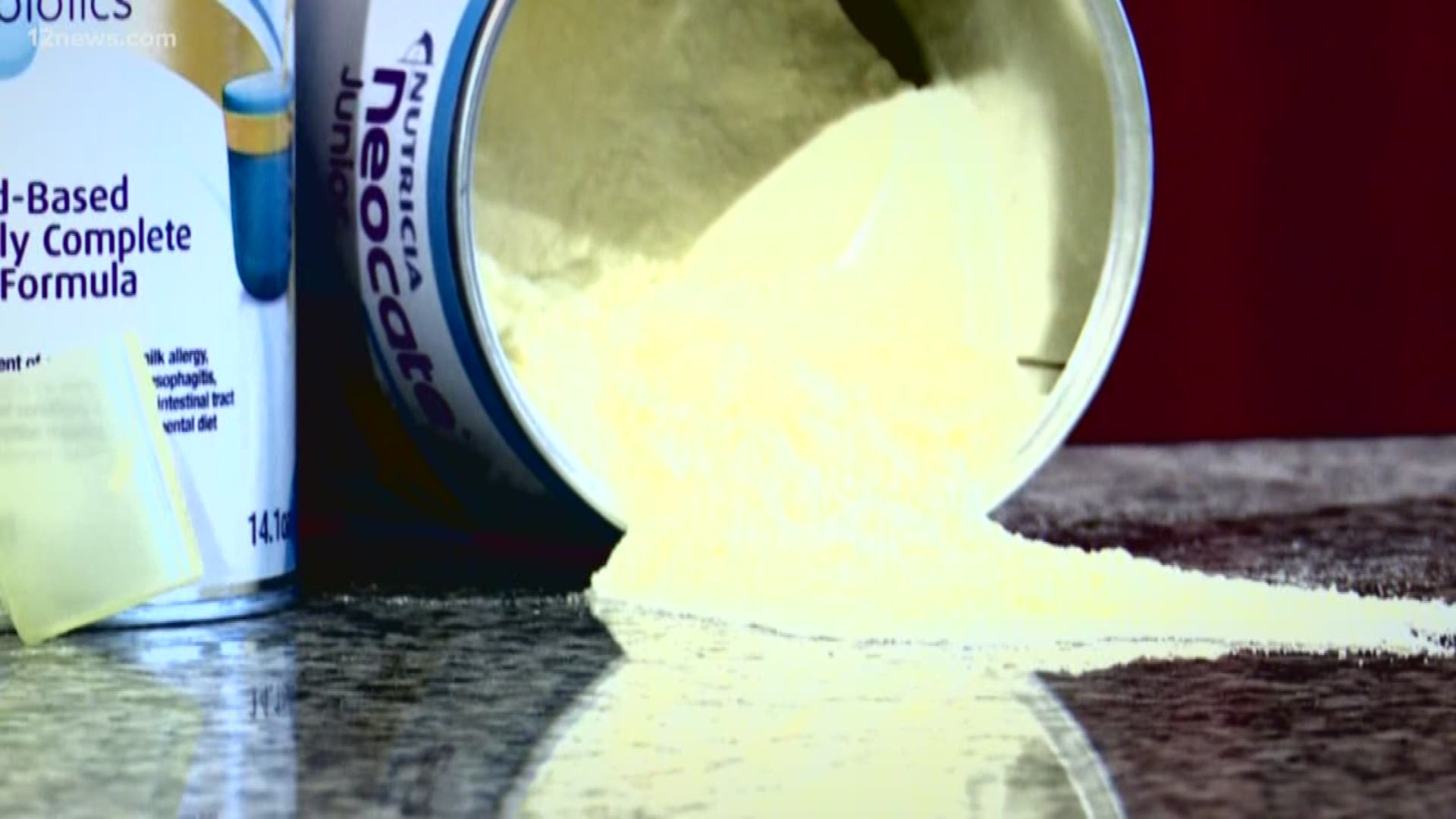 GOODYEAR, Ariz. — A Buckeye mom is urging parents to check their baby formula to make sure it hasn't been tampered with after she and her husband say their box of formula was filled with flour.

"When they hit four months like her, they start smiling more," said Chelsea Bellinger of Buckeye.

First-time mom Chelsea Bellinger lights up when she talks about her beautiful baby girl, Blakely.

"I think that's when it starts to get fun because you're able to teach them and it just warms your heart up," she said.

Her mother-in-law typically buys her a box or two of the expensive formula once a week from a Walmart in Goodyear. Bellinger usually pre-makes the bottles herself but one night, her husband did it for her.

"In the morning around 4:30, I'd say, I went to grab one out of the fridge and I noticed that all of them were separated. It looked like the formula was all at the bottom and the water was at the top. And my first thought was that my husband didn't shake the bottles before he put them in there," Bellinger explained.

So she shook it up, heated it, and gave it to Blakely. A couple of hours later, she went to grab another bottle and that's when she realized something wasn't right with the formula.

"I poured one out into the sink and it was very clumpy in the bottom. And when I opened the container I realized the color and the consistency was off from what I'm used to seeing," she said.

Bellinger then tasted it only to realize it was flour.

"I was very scared," Bellinger said.

The situation escalated when Blakely got sick for several days.

"As a first-time mom and her being this young, as a baby you don't know if they're allergic or if her throat would've closed up from a gluten reaction," she said.

Thankfully, Blakely is now OK, but her concerned mom is not.

"I don't think I've ever been so protective in my whole life," Bellinger said.

Bellinger said the box that she believes was tampered with appeared super glued shut and the package of formula was sealed differently than normal.

Last year, a similar story unfolded in Tucson when a woman was found guilty of buying baby formula, replacing the contents with a flour mixture, then returning it to the store.

Bellinger felt obligated to share her story with 12 News because she is fearful that it could happen to another parent in the Valley.

"I told my husband like, 'What if we're those people that don't say anything about it and then somebody else's child actually does have an allergic reaction from it and they die from it? I would feel terrible,'" Bellinger said.

A Walmart spokesperson tells 12 News customers are allowed to return formula, but employees are instructed to not put returned formula back on the shelves. They are reviewing security footage at their Goodyear store to see if that protocol was broken.

In the meantime, Bellinger and her husband are double checking their formula and urging other parents to do the same.

"A lot of moms or dads who usually make bottles, I would just tell them to show everybody who does make the bottles and show them what the consistency looks like," explained Bellinger.

Goodyear Police tells 12 News they have not received any other reports of this happening but are aware of the situation and are keeping an eye out.