AUSTIN, Texas — Although East Austin has historically suffered the most infections from COVID-19, it's West Austin that has so far received the most vaccines, according to a report from the COVID-19 Modeling Consortium at the University of Texas.

The report, released Monday, estimated the spatial distribution of COVD-19 infections and vaccine administration across Austin. Researchers marked geographic differences in the outcomes and noted that, in particular, ZIP codes on the western side of Austin tend to have higher vaccine coverage and lower estimated cumulative infections than ZIP codes on the eastern side.

The report notes that the population compositions used in the study do not account for annual fluctuations in ZIP codes. Fluctuations could occur due to the seasonal migration of university students.

The researchers also noted that the estimates for age groups and ZIP codes with small numbers of hospitalizations also have a high level of uncertainty and that the case and hospitalization data does not include individuals who were tested or required hospitalization for COVID-19 while traveling outside of Austin or whose addresses were not correctly recorded.

The CDC social vulnerability index was calculated for Texas at the census tract level using the 2014-2018 American Community Survey, according to the report.

"Our report is meant to, for the first time, provide a yardstick of equity, of distribution of the vaccine. And what we, what we find is that places where there is [the] highest levels of social vulnerability and highest number of infections, that these are places that are lagging behind the city average in terms of getting vaccines into people's arms," said Spencer Woody, a post-doctoral fellow with the COVID-19 Modeling Consortium. "We're meaning to provide this report as a report card, as a yardstick to measure equity of distribution."

Overall, researchers said the disparities are noticeable in the report, and the goal is to have this research help local health officials figure out how to better provide services that allow more equitable access to the COVID-19 vaccine.

"I think the on-the-ground perspective is, of course, extremely important," said Maureen Johnson-León, a data equity specialist with the consortium. "And this report is really intended to provide data and analysis that helps people that are actually implementing vaccinations to continue to do so in the best manner fit, and then also allow different communities to also see and visualize what's going on and also bring those concerns. Austin is a multistakeholder community and, you know, again, specific things that might be in social vulnerability to include some of those racial and ethnic differences that have been historical sources of disparity for Austin and many cities and places in the United States." 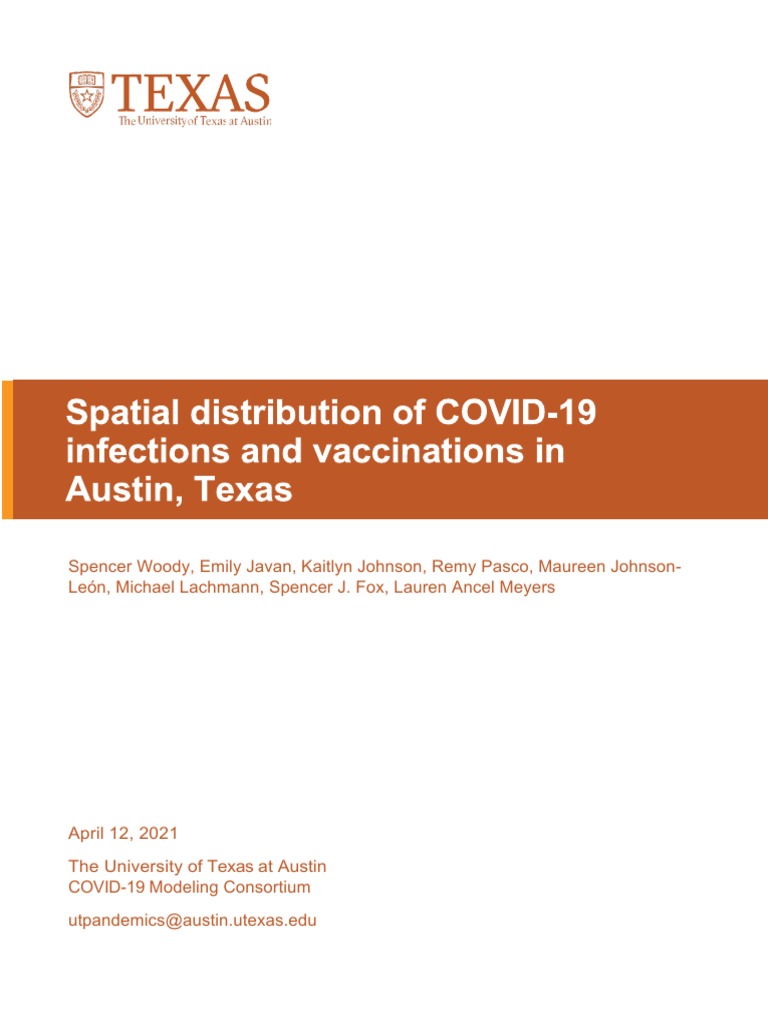 Local advocacy groups view the trend as troubling but nothing new.

"We knew that there would continue to be inequities when it came to scarce resources and then when we got to the point we would have vaccines, we were concerned about the equitable distribution of those vaccines, something that's highlighted in the report," said Paul Saldaña with the Austin Latino Coalition. "We already knew that because low-income minority communities live on the Eastern Crescent, those geographic ZIP code areas typically are in areas where we perpetuated racism, classism, all those things historically, and barriers. There's a lack of health care facilities, hospitals, grocery stores, pharmacies. And right now, all of those are playing a vital role in the distribution of vaccines. And when you don't have those facilities, you don't have providers. And that means that people on the Eastern Crescent are not going to have equitable access to those opportunities."

Saldaña added that even though larger sites have been providing vaccinations by appointment, notably places like the Circuit of the Americas and Dove Springs Recreation Center are in East Austin, he said the doses are not ending up in the arms of East Austinites initially.

"And what we've been saying over the course of the last five months, just because you're putting hub location areas east of I-35 or in the Eastern Crescent doesn't necessarily mean that our people are getting access to it," he said.

RELATED: VERIFY: Texas is not 'very close' to herd immunity from COVID-19

"I think when you have folks like the National Academy of Medicine, which are recommending this across the country and saying, 'Hey, we got to pay attention to these things and make sure that we cover our bases and do this in a smart way and there's resources to do that,' right, it wasn't just saying, Do this and there's no resource, but here's the resource.' I think that that is kind of the thing that makes it a little bit even harder to swallow," Worthington said.

"And I think when you do systems like that, it's naturally going to favor one particular group. In the case of saying we've got one particular time of day or a couple of times per week, it's going to naturally favor people that have flexibility in their work schedule. I think it's naturally going to favor folks that have better Internet connections who can compete for things like that," he said. "And so, I think when you think about those communities, you know, people know that getting access to the best resources, whether that's Internet access or information, is really hard to come by."

Worthington recently published an op-ed in the Austin American-Statesman discussing equity issues with vaccine distribution, among other things.

"This report is another example of how the pandemic has disproportionately impacted our community," she said. "Disparities in access to testing and vaccines continue to put vulnerable residents at-risk, especially communities of color and Austinites in the Eastern Crescent. As the allotments of vaccine doses increase, we have to prioritize equitable distribution."

She added that the so-called "digital divide" could also play a role in the inequities found in the report.

"We can do this by eliminating the digital divide. Last month, I brought forth policy to get mobile vaccine clinics to people in areas that need it most. This weekend, I hosted a pop-up clinic in Del Valle with the Del Valle Community Coalition. Folks were registered by volunteers the day prior during a distribution event. Additional pop-up clinics are in the works as well as walk-up sites too," she said. "We need to continue to make this process easier, so we can move past these inequities.”

A spokesperson with Austin Public Health sent KVUE a statement on Monday, explaining the initiatives the agency has taken to improve equitable access to the vaccine. In a statement, the spokesperson said:

"Austin Public Health has partnered with small non-profit providers who have demonstrated experience with evidence-based interventions to shape and support outreach efforts to promote the COVID-19 vaccine to populations at a high risk of severe COVID-19 disease. Seven organizations received small grants to assist with community outreach through June 2021. As part of their outreach efforts, the organizations will be required to conduct a community needs assessment to better understand perceptions about the vaccine and barriers to getting the vaccine. These organizations are assisting with grassroots outreach to reach priority populations, which includes communities of color. APH is also working with faith-based organizations in the Eastern Crescent as well as partnering with UT School of Nursing to support pop-up vaccination clinics in East Austin churches.

Additionally, APH has prioritized placing our vaccination sites in the Eastern Crescent, which has historically lacked routine access to healthcare infrastructure and is home to large portions of Austin’s communities of color. APH has also established a mobile vaccination program that continues to work with Meals-on-Wheels, City of Austin Housing Authority, and Foundation Communities to provide in-home vaccinations to individuals who may not have the resources to get to a vaccination site.

Further, APH has partnered with 3-1-1 to expand resources to assist the APH Equity Hotline in providing over-the-phone enrollment services for individuals who lack internet access or capabilities. Individuals when calling 3-1-1 can register for an account, troubleshoot login/password issues, and request a member of the Equity Hotline provide a callback to schedule an appointment. Additional grassroots efforts that support our phone services are partnerships with organizations that refer clients to our Equity line to schedule appointments for vaccines."

Chris Van Deusen, the director of media relations for The Texas Department of State Health Services, also told KVUE that they've been focused on ensuring that vaccine is getting to a "wide variety of providers in different communities."

"Including, for example, federally qualified health centers and community clinics that provide medical care to people without regard to their ability to pay," Van Deusen said via email. "The federal government is also directly allocating vaccine to these kinds of clinics. Local leaders and organizations know best how to work in their areas and reach priority populations, so we can work with them to ensure vaccine is being allocated to providers that serve those communities."

WATCH: Bryan Mays: COVID-19 vaccines are our weapon for returning to normal