The popular Austin store Uncommon Objects is relocating from South Congress to a location near Manchaca Road and Ben White Boulevard. 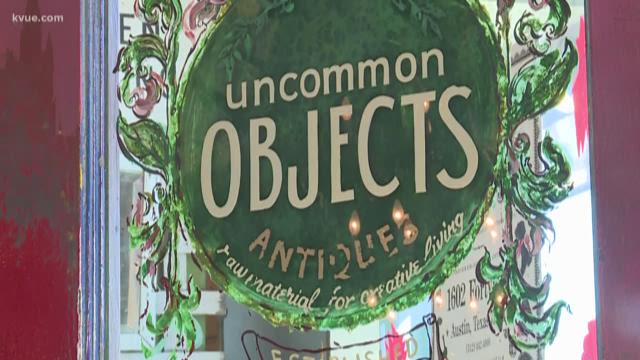 It's one of those places that comes up when tourists google "things to do in Austin" -- the store Uncommon Objects.

It has been located on South Congress Avenue since it opened in 1991, but now it will get a new home.

"It's bittersweet, it's a very challenging time for us, we've invested, I raised my kids in this store,” said owner Steve Wiman. "It's an important place for us and it's going to be sad to leave it."

The store is moving to Manchaca Road and Ben White Boulevard. Monday was the last day the original location was open for customers.

Wiman said they plan to pack up and move the shelves upon shelves of objects over the next nine days.

"People look at all the stuff that has to happen, and that for us, we move things all the time,” said Wiman, something they've slowly watched their former South Congress neighbors do.

"I think that South Congress will feel our loss a bit, but I know also that things just keep going,” added Wiman. "The neighborhood is changing radically, as you know."

The store has everything from acorn tops, to things made from the ocean’s bottom. He said there are 25 people who sell their items in the store.

"I love having somebody come in and just sort of be out of their element,” said Wiman. "I know that sometimes people step up and buy something, that they couldn't tell you exactly why they"re buying it, but there's that emotional, sentimental pull.”

Wiman is really quite picky about what sits on the store's shelves.

"I do have a strong vision of what the shop is about, and how the shop should feel,” said Wiman.

Meredith Swim recently moved to Austin after visiting for years. Each time she came to town she stopped in the store.

"To me it really represents a part of Austin that is symbolic of it's authenticity, and it's uniqueness, and it's celebration of creativity,” said Swim.

She also works at another shop on South Congress.

"It's changing, and I know a lot of parts of Austin are changing," Swim said. "My hope would be that we could change and expand, and also keep that authentic feel."

Stephanie Rubiano is an artist and longtime customer of Uncommon Objects.

"I would say I definitely got my start here,” said Rubiano.

For her, Uncommon Objects started as a place for inspiration, but now she sells some of her art there.

Rubiano was born and raised in Austin, and calls this move detrimental to the area.

So now Wiman will be in one of the places he likes most for his shoppers, out of his element.

"It's going to be very different being off the beaten track, the path in front of uncommon objects gets many many people every day, and our new spot probably will not," said Wiman.

He just hopes the customers help make the new location not so uncommon.

At the new location, Wiman will have a few familiar past neighbors like Vulcan Video and "End of an Ear."

He said they plan to have their grand opening on Friday October 27th.