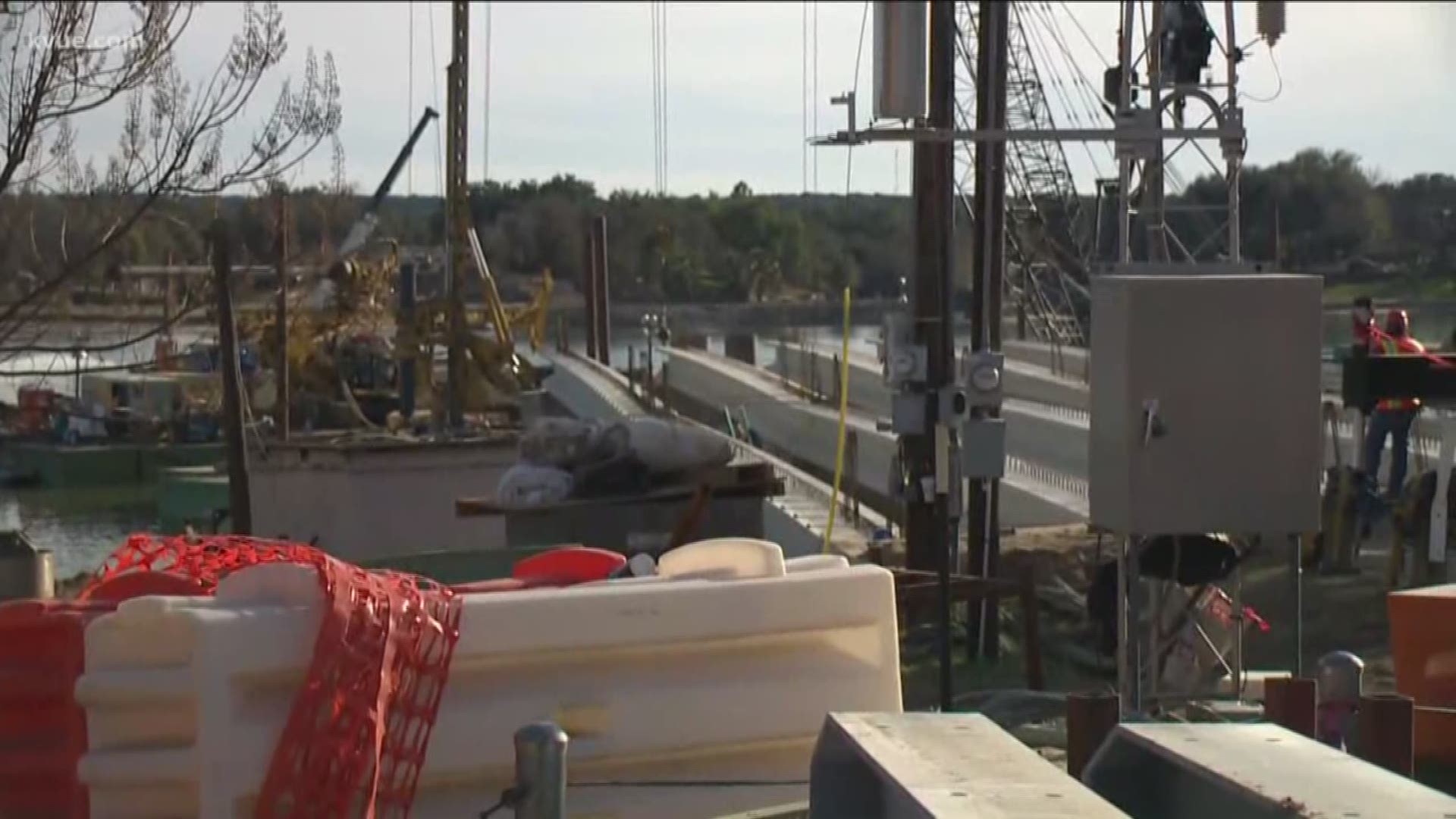 KINGSLAND, Texas — The FM 2900 bridge in Kingsland that collapsed during a "historic" flood in October has reached a milestone.

Crews set the first beams for the bridge on Thursday. Ten beams that are 80 feet in length were set on two bridge spans.

TxDOT held a groundbreaking ceremony back in November to celebrate the construction of the FM 2900 bridge.

"I'm not sure how they got it done, but I'm very glad that they did," Pat Muller said.

TxDOT awarded a contract to build the new bridge just 15 days after the RM 2900 bridge washed away.

For Smith, who lives on the south side of the bridge, and his neighbors, that quick work is important.

He drove an hour to Friday's groundbreaking, something that used to take him five minutes.

"We live on the wrong side of the bridge," said Smith.

He said people on his side of the river have to use the bridge to go to the post office, the grocery store, restaurants, and nursing homes to check on their aging relatives.

"Our household has been very disrupted," Smith said.

Ground is broken and work is underway on the RM 2900 Bridge in Kingsland #GitRDone #Rm2900 pic.twitter.com/xy5ULRXzkH

The bride was swept away on Oct. 16 during the flood along the Llano River. It was the largest flooding event since 1935, TxDOT said.

"I cross this bridge twice every day. There's so many people that still commute to Austin that depend on this. It's really just crippled the whole industry right now in this whole area," Gary Delz said.

"I would come to Kingsland three times a week to go to the post office for my business. Of course we would shop there and go eat there," Smith said.

Muller, who owns Valentine Lakeside Resort, remembers the morning it washed away.

"For the first time I was scared, before that, I was born and raised in south Louisiana in hurricanes, the weather didn't scare me. When that bridge washed away, I knew she was serious," Muller said.

The water washed away Muller's dock and boat, which apparently traveled over two dams, and ended up in Lake Travis.

"The power of water was amazing," Muller said.

"This has been very sentimental, it's been very emotional for us native Kingslanders," said Delz.

He's lived in the area for years.

The bridge was about 50-years-old, and Delz remembers taking the ferry across the river before crews built the bridge that quickly washed away in the floodwater.

"Just to watch it go down the river really hurt, and we know the importance of this bridge and transportation daily," Delz said.

But now the community, divided by water, has come together to rebuild.

"This community will come back bigger and better than ever," Muller said.

“The new bridge will cost $17.3 million, which includes incentives for the contractor, Capital Excavation Company, to expedite construction,” TxDOT Austin District Engineer Terry McCoy said. “If all goes well, the new bridge will open by next April.”

Here's a rendering of what the completed bridge will look like, courtesy of TxDOT: