Austin, one of the most deaf-friendly cities in the entire country, has two deaf families that are about to tell their stories to the world. 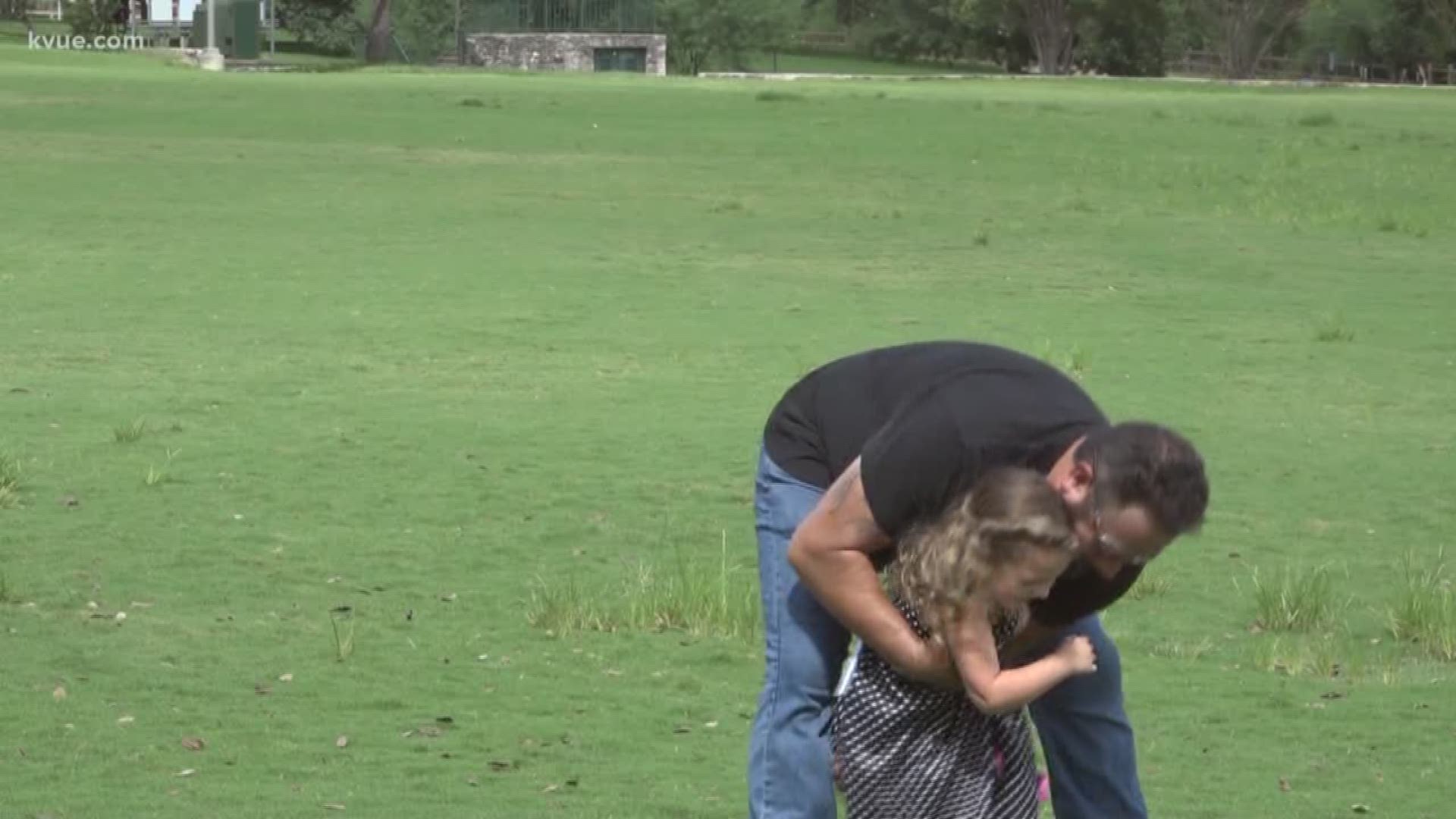 AUSTIN — Editor's Note: Some of the quotes in this story came from a sign language interpreter.

Austin may be the capital of Texas, but it is also one of the most deaf-friendly cities in the entire country. Now, two deaf Austin families are about to tell their stories to the world.

The cable television station A&E is airing a special on Wednesday, Sept. 12 called "Deaf Out Loud." It will follow three deaf families raising children in a hearing world. The producers of the Emmy-winning show "Born This Way" created the documentary. Two of the families are from Austin, and each family has a distinct message for the hearing and deaf communities.

April Garcia grew up in West Texas as a CODA -- a child of a deaf adult. Both her parents are deaf.

"It's just a natural part of who I am, which is why I feel like I identify with deaf culture so much," April Garcia said. "I am kind of stuck in both worlds, like in between."

Growing up, Garcia was one of the only people her family knew who could both speak and sign, meaning she was frequently interpreting for her parents.

"I remember being 12-, 13- and 14-years-old having to go with my parents and with their friends to the doctor to interpret," Garcia said. "I feel like a deaf person gets me better than a hearing person would and understands my identity and culture."

Garcia eventually did some sign language translation work when she got older and moved to Central Texas. This is where she met her future husband -- Paco Garcia -- when she provided some interpretation for him at a doctor's office.

"I said, 'Would you like to go to dinner or something?' And she gave me her phone number," Paco Garcia said. "That's pretty much how it was. I just asked her out."

Paco Garcia grew up in Mexico, where he went to public school and was the only person in his school who was deaf.

"Everybody was talking," Paco Garcia said. "I was the only deaf individual, so there was a lot of frustrations. I know it's not fair, but life isn't fair. You just try to do the best you can."

Once he moved to Texas, he said he started learning the basics of American Sign Language, or ASL.

"I really wanted to learn quickly," Paco Garcia said. "I felt like I was an American now."

These two now have a big, diverse family filled with many personalities. The Garcias have six children, four or whom are deaf and two are hearing. These family members both speak and sign with each other.

"It's really important for deaf people around the world to see how we function and to know deaf people can do anything," Paco Garcia said.

Paco Garcia works in Central Texas as a handyman and general contractor. He said sometimes when he goes out on a job, people will drop him as a client when they find out he's deaf.

"I really just want them to understand that it's OK try to write back and forth and communicate with me," Paco Garcia said. "All I'm here to do is repair their home and make them happy."

That's why these two hope that being a part of "Deaf Out Loud" will allow them to show both deaf and hearing people how they are raising their kids and how they are not that different from people who can hear.

"Oftentimes, people think, 'Oh, these poor deaf people,'" April Garcia said. "'You're having to take care of them.' They always think I'm taking care of everybody. That's not true at all. They take care of me."

Sheena McFeely and her family can relate to the Garcias because she and her husband -- Manny Johnson -- are both deaf parents.

"There's just so much more to deaf people than what people see," McFeely said. "Their lives are as deep as anyone else's, and they aren't to be pitied."

Before getting married, McFeely once had a career in Hollywood as an actress. She said she would oftentimes see deaf roles handed out to hearing people impersonating someone like her.

"Hollywood and hearing children are using the language but without including us," McFeely said. "It's such a contradiction."

That's why "Deaf Out Loud" is something McFeely is excited to see not only for herself but for other deaf people wanting to act or be a part of a documentary special like this one.

"This show finally gives three different families the opportunity to really give their story through deaf eyes," McFeely said. "It's not a hearing writer that wrote them in or a producer. It's really an opportunity to share their language and their culture. I think that's what's going to make this show unique. And I think it's about time."

McFeely also is a motivational speaker, as she travels around the country to conferences and deaf schools, educating people about ASL. Johnson said there's value in providing this to all types of people.

McFeely and Johnson have two daughters -- Shaylee and Ivy Mansfield. While the older daughter, Shaylee, is deaf, Ivy can hear. They both are being raised learning sign language.

"Why do you love to sign?" Shaylee asked Ivy.

While Ivy speaks English in her classrooms and with her hearing friends, she is learning and using ASL at home with her parents and around other people who sign as well. This is a decision some have criticized but one her parents are proud of.

"I just want to provide a happy place for our family to teach sign language," McFeely said. "I want to show that it's OK to laugh, make mistakes and make jokes. I want hearing parents to see that and see that we're just like any other family."

"We're hoping this starts a lot of healthy conversation about what is best to do with deaf children," Johnson said. "This is unique because they actually chose three families with very different perspectives, and I think people who watch the show will be blown away."

April Garcia said she has already been contacted by many deaf people as they are telling her it is changing how the hearing people in their lives see them.

"We've been contacted by people all over the world from deaf people who are saying, 'This show is going to change our lives,'" April Garcia said. "They are saying, 'I live a very isolated life. My family doesn't understand the importance of learning sign language for me.'"

The Garcias are also big advocates for adopting deaf children, as they have four adopted deaf children of their own. Two of them were brothers before joining the Garcia family. Joziah Garcia, who is deaf, and Joe Garcia, who can hear, weren't even able to communicate with each other when April and Paco brought them into their home. Joziah barely knew how to sign and Joe didn't know at all.

"Growing up, I wasn't able to sign," Joziah Garcia said. "I never learned sign language. Nobody was ever willing to teach me that. My family is definitely special and means a lot to me."

The Garcias have a nonprofit -- Hope's Lighthouse -- that provides support for families adopting deaf children. Sheena McFeely and her family have also created a company called ASL Nook that provides ASL classes online and in schools.