'Trump 20' spray-painted on family's garage after someone set their cars on fire, police now investigating

The Little Elm family believes they were targeted because they recently put up a "Black Lives Matter" yard sign. 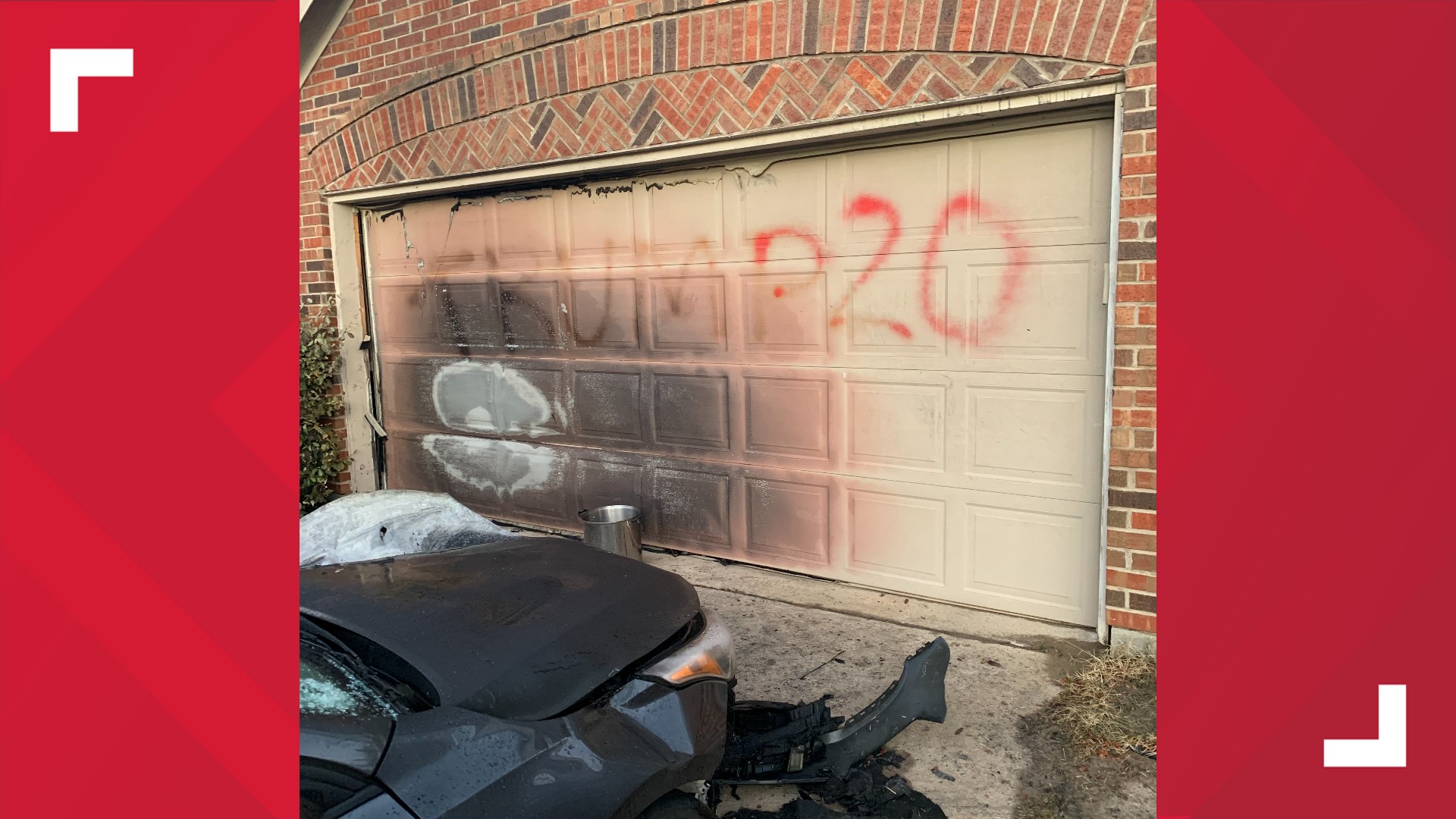 LITTLE ELM, Texas — A Black couple in Little Elm woke up in horror last Wednesday morning, finding two of their cars on fire in their driveway and a political taunt left behind.

Just after midnight, fire crews raced to the home of Jayla Gipson and Charles Crawford to extinguish the blazes.

Credit: Jayla Gipson
A photo of the charred Optima in Gipson and Crawford's driveway.

Luckily, Gipson's young son got up to use the restroom in the middle of the night and noticed the fires outside

"If he hadn't done that, my house might be burned down," Gipson said.

"My daughter's bedroom is towards the front of the house, so this could have been really bad."

Credit: Jayla Gipson
A photo of the burned Forte in Gipson and Crawford's driveway.

But when the smoke cleared, the two noticed the phrase 'Trump 20' spray-painted on their garage door. Gipson says it wasn't there the day before.

Suddenly, the possibility of an "accident" started to fade away.

"That escalated things quickly," Gipson said. "We felt like we were targeted."

Credit: Jayla Gipson
Last Wednesday, Jayla Gipson and her family woke up and found both their cars on fire. They also found 'Trump 20' spray-painted on their garage.

When the sun came up, Gipson and Crawford assessed the damage.

Both vehicles were determined to be a loss as soot and burned car parts covered the driveway.

The two hung bedsheets over their garage door to mask the message left behind. A neighbor even brought over a power washer to help clean up.

"We just wanted to clean everything up, a lot of people were coming by taking pictures and it was just a lot of attention," Crawford said.

Gipson said officers questioned the family about any enemies they may have.

She said she couldn't point them in any direction.

Gipson and Crawford moved to Little Elm in 2017 and told WFAA that they love their neighborhood. No complaints. No troubling incidents.

The only explanation they could reach involved a "Black Lives Matter" yard sign that the two put out around Thanksgiving.

The morning of the fire, Gipson found the sign vandalized with the same color spray paint that was used to deface her garage.

"That sign was in my yard for less than two weeks and then all of a sudden we get a tragedy like this," Gipson said. "I would have preferred they just take the sign."

"But to set the house on fire? That's going way too far."

Gipson told WFAA she feels like she's the victim of a harmful political jab and possibly a hate crime.

Erin Mudie, the spokesperson for Little Elm Police Department and the town, wouldn't release any more information except that the incident is being thoroughly investigated.

Meanwhile, Gipson and Crawford are navigating the insurance process.

The two are waiting to hear back from their provider about their cars, but since the case involves a police investigation, a settlement could take awhile.

Another complication: Gipson just had several tumors removed from her brain.

She's still on the mend from that surgery and is slowly getting back to work.

Crawford told WFAA that the community and fellow neighbors have stepped up.

"One neighbor bought us a camera system that I installed and another bought paint for us to paint over the 'Trump 20' left behind," Crawford said.

A GoFundMe has also been set up for Gipson and Crawford as the two get back to normal.

Then again, the couple wonders what normal even means now.

They're still trying to grasp the possibility that in an American neighborhood, freedom of expression was attacked.

"It's not easy for us to financially take care of this right now," Gipson said. "It's just devastating. I never thought this could happen in Little Elm."