“For decades, Monica has been a fierce leader — bringing light to the injustice transgender people face, especially Black transgender women.” 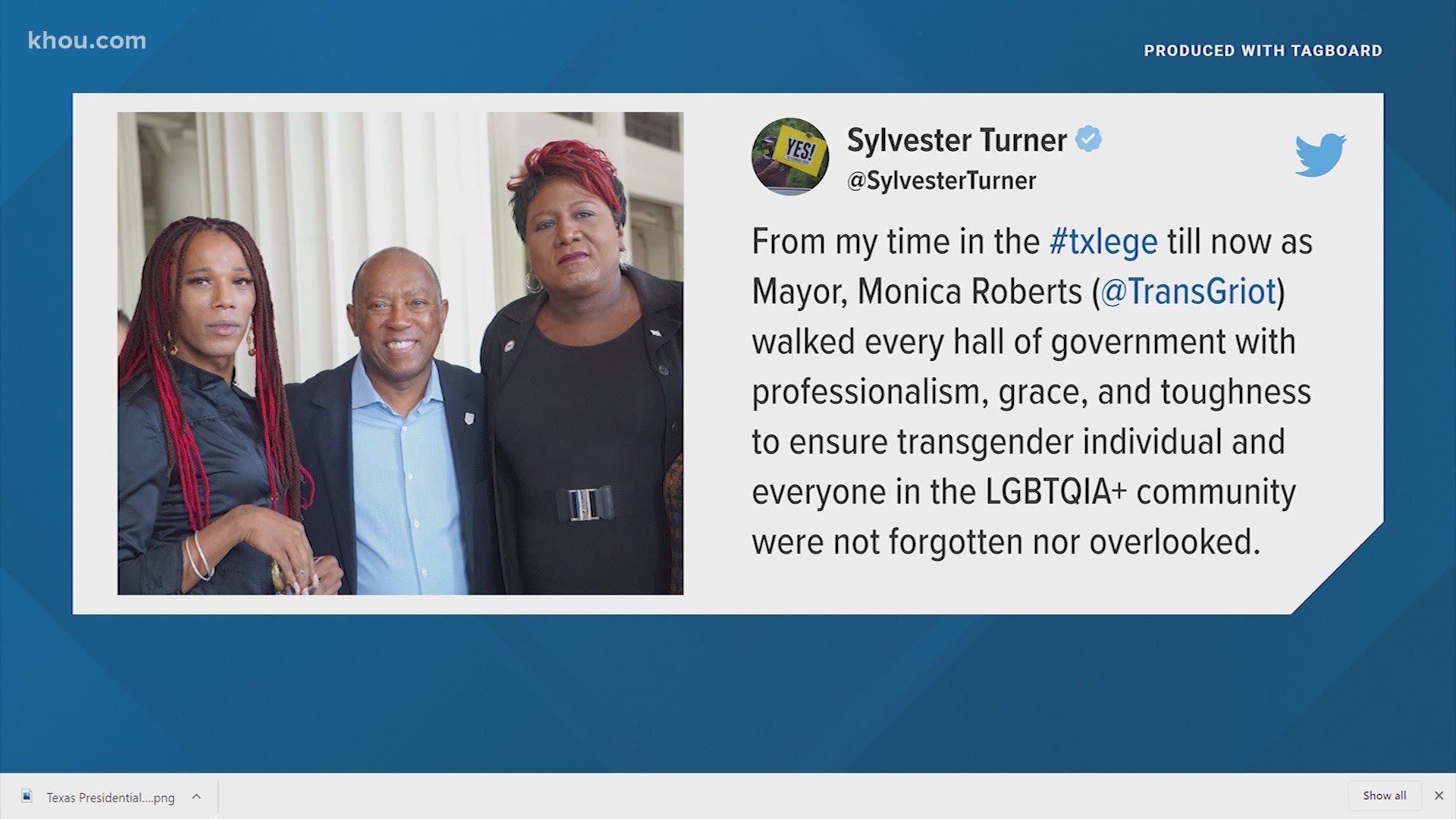 HOUSTON — Transgender rights advocate and journalist Monica Roberts is being mourned in Houston and across the country after her death this week at the age of 58.

Roberts was found early Tuesday lying in the parking lot of an apartment complex at 3030 Elmside Drive. An autopsy later revealed she suffered a medical emergency.

Roberts spent 15 years chronicling the lives of Black transgender women through her award-winning blog TransGriot. Her stories shed light on the violence faced by so many in her community.

"The loss of Monica Roberts is devastating. She was an unstoppable advocate and a powerful voice, always speaking up for justice and uplifting the trans community," GLAAD President Sarah Kate Ellis said.

Roberts, who was based in Houston, was one of the original board members of Mayor Sylvester Turner’s LGBTQ Advisory Board.

“Monica was a pioneer in every sense of the word,” Houston Mayor Sylvester Turner said Friday. “She impacted countless lives and wrote the trans communities' stories that needed to be told.”

Thank you for fighting for the community, Monica Roberts. 💔 https://t.co/UNwmEMZ9mR

As a journalist, Roberts was known for being tough but fair in her fight for transgender rights.

“From my time in the Texas Legislature until now as mayor, Monica walked every hall of government with professionalism, grace, and toughness to ensure transgender individuals and everyone in the LGBTQIA+ community would not be forgotten or overlooked,” Turner said.

Congresswoman Sheila Jackson Lee praised her as a "tireless advocate for Trans rights."

Congresswoman Sylvia Garcia called Roberts a "giant in the movement for the rights and dignity of the transgender community."

In May 2019, Turner presented Roberts with the Barbara Jordan Breaking Barriers Award. It was just one of many awards she won through the years.

Monica Roberts was a dear friend, trailblazer and a tireless advocate for Trans-rights. She was founding editor of #TransGriot, the nation’s first blog focusing on issues pertaining to trans women, particularly of color. 1/3 pic.twitter.com/kIAr68Qe3A

Earlier this year, she was named one of The Advocate’s Women of the Year.

“No reporter this year has covered the breadth of Black trans women’s lives — and very often, deaths — the way this journalist has,” Pride Media CEO Diane Anderson-Minshall wrote in The Advocate.

In 2018, Roberts was also given the Susan J Hyde Award for Longevity in the Movement at Creating Change and named outstanding blog at the GLAAD Media Awards. She won the Human Rights Campaign’s John Walzel Equality Award in 2017, according to The Advocate.

In her final tweet the day before her death, she urged everyone to vote.

1/ Monica Roberts was a friend, a fighter, and a giant in the movement for the rights and dignity of the transgender community. It was the honor of my life to fight alongside her, when in 2017 we pushed back against the transphobic bathroom bill in the Texas Senate. pic.twitter.com/DuoOwLeu7O