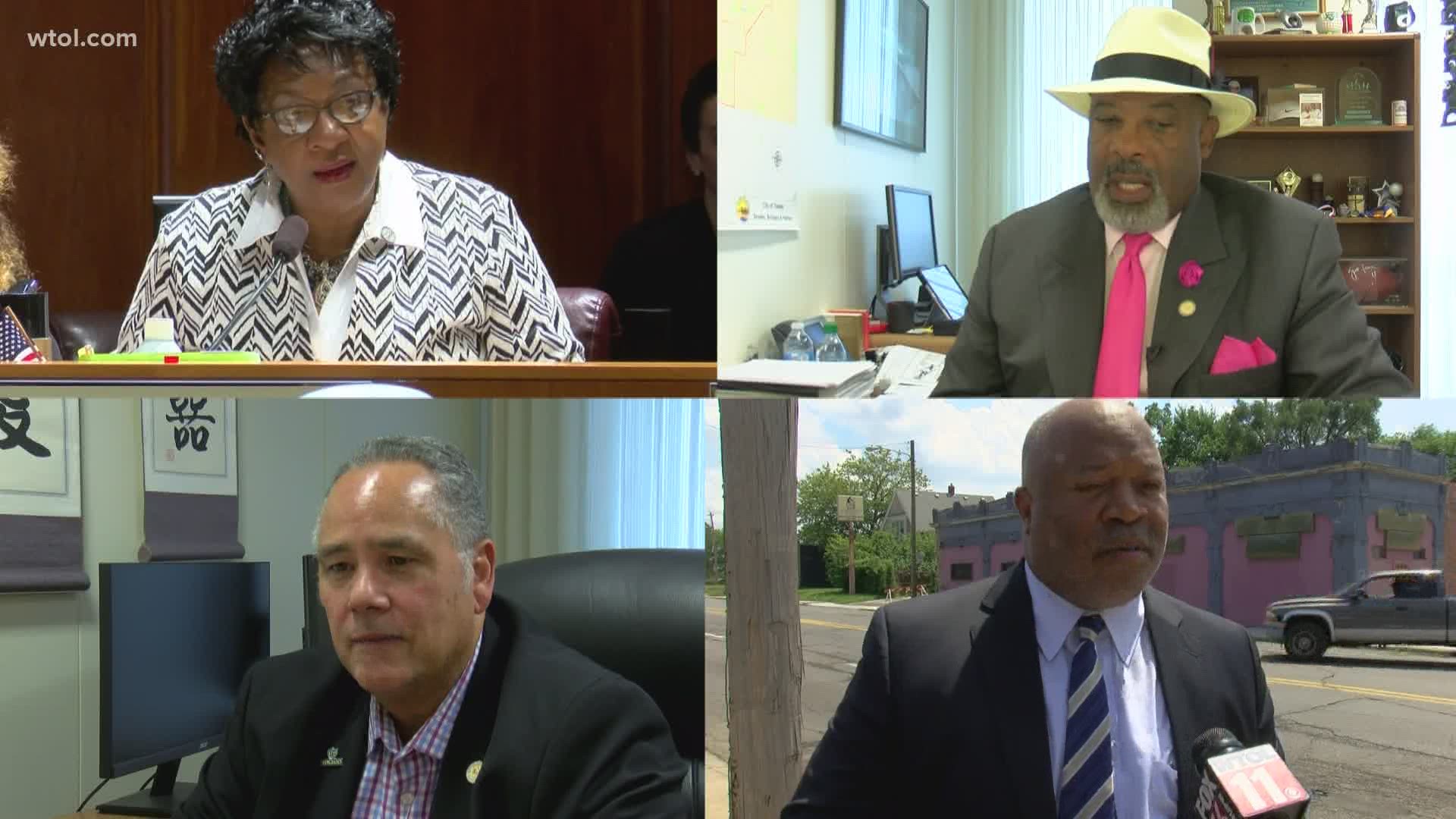 TOLEDO, Ohio — The next step in Toledo's largest public corruption investigation in decades was a large one as a grand jury indicted four federally charged members of Toledo City Council and a local attorney in the alleged money-for-votes conspiracy and extortion scheme. Their probable cause hearing, set for Tuesday afternoon, was vacated and the new charges were filed.

Council members Yvonne Harper, Larry Sykes and Gary Johnson and attorney Keith Mitchell were to appear via video conference at 2:30 p.m. before Judge Jeffery Helmick. Council member Tyrone Riley had waived his right to the probable cause hearing, consenting to have the proceedings bound over to the grand jury.

Early Tuesday afternoon, the preliminary hearings for Harper, Riley, Johnson, Sykes and Mitchell were vacated, court filings show. The case is now in the court of Federal Judge Jack Zouhary.

The new charges made Tuesday were:

U.S. Attorney Justin Herdman announced Tuesday afternoon that a federal grand jury sitting in Cleveland returned the 13-count indictment charging the four sitting Toledo City Council members and local attorney Mitchell for their participation in a bribery and extortion scheme that encouraged soliciting and accepting cash, checks, money orders, or other things of value from local business owners in exchange for their votes on city council.

“Today’s indictment is the next step in the process of ensuring accountability and maintaining the public’s trust in its elected officials in the city of Toledo,” Herdman said. “Let this indictment serve as a reminder to all who seek to exploit their elected positions for personal enrichment – the public deserves better and we, the Department of Justice, will work day in and day out to ensure that the public’s interests are protected.”

"Elected officials are elected by the people, to serve the people, not to serve their own financial self-interest,” said FBI Special Agent in Charge Eric B. Smith.  “The FBI will continue efforts to root out public corruption so citizens can have faith and trust in their public officials.”

Tyrone Riley, age 64, of Toledo, was indicted on one count of Hobbs Act conspiracy and five counts of Hobbs Act extortion under color of official right.

Garrick “Gary” Johnson, age 66, of Toledo, was indicted on one count of Hobbs Act conspiracy and two counts of Hobbs Act extortion under color of official right.

Larry Sykes, age 71, of Toledo, was indicted on one count of Hobbs Act conspiracy and two counts of Hobbs Act extortion under color of official right.

Keith Mitchell, age 69, of Toledo, was indicted on one count of Hobbs Act conspiracy and two counts of Hobbs Act extortion under color of official right.

Three of the four council members still have been voting on city business, with Sykes, Riley and Johnson recently weighing in during council meetings. Harper was not on last week's virtual meetings.

RELATED: What are the accusations against Toledo City Council members? See the full list

Democratic council members Larry Sykes (At-Large), Yvonne Harper (District 4), Gary Johnson (At-Large) and Tyrone Riley (District 1), as well as local attorney Keith Mitchell, are all mentioned in the complaint for their role in an alleged bribes-for-votes scandal that dates back to 2013.

The scheme allegedly encouraged soliciting and/or accepting cash, checks, money orders or other things of value from local business owners in exchange for the council members' votes. Mitchell is accused of funneling the bribes for Harper.

ACCUSED OF ACCEPTING MORE THAN $34K

After reviewing the 41-page criminal complaint, WTOL found the individuals are accused of soliciting or accepting more than $34,000.

The person accused of accepting the largest amount of money is Harper, who, according to the FBI, took about $16,000.

Harper is also accused of funneling $3,000 to a constituent in exchange for his or her silence regarding a racial complaint at a local business, according to the FBI.

After Harper, Riley has accepted a total of $11,800 dollars, according to the affidavit.

Documents show he accepted money in exchange for votes for a special use permit, a 'curb cut project', multiple internet cafés, and a sprinkler waiver.

RELATED: What happens when there is a vacant seat on city council?

RELATED: Who is Keith Mitchell?

If Yost complies, the council members would be suspended from their positions and unable to participate or vote in meetings until a verdict in their cases has been decided.

On July 13, Yost's office responded with a statement saying, "The matter is under evaluation, taking into consideration the rights of the accused to a presumption of innocence – and the rights and interests of the public. When further details are available, we will be sure to promptly share.”