The project is aimed at tackling the influx of traffic in the Austin area. 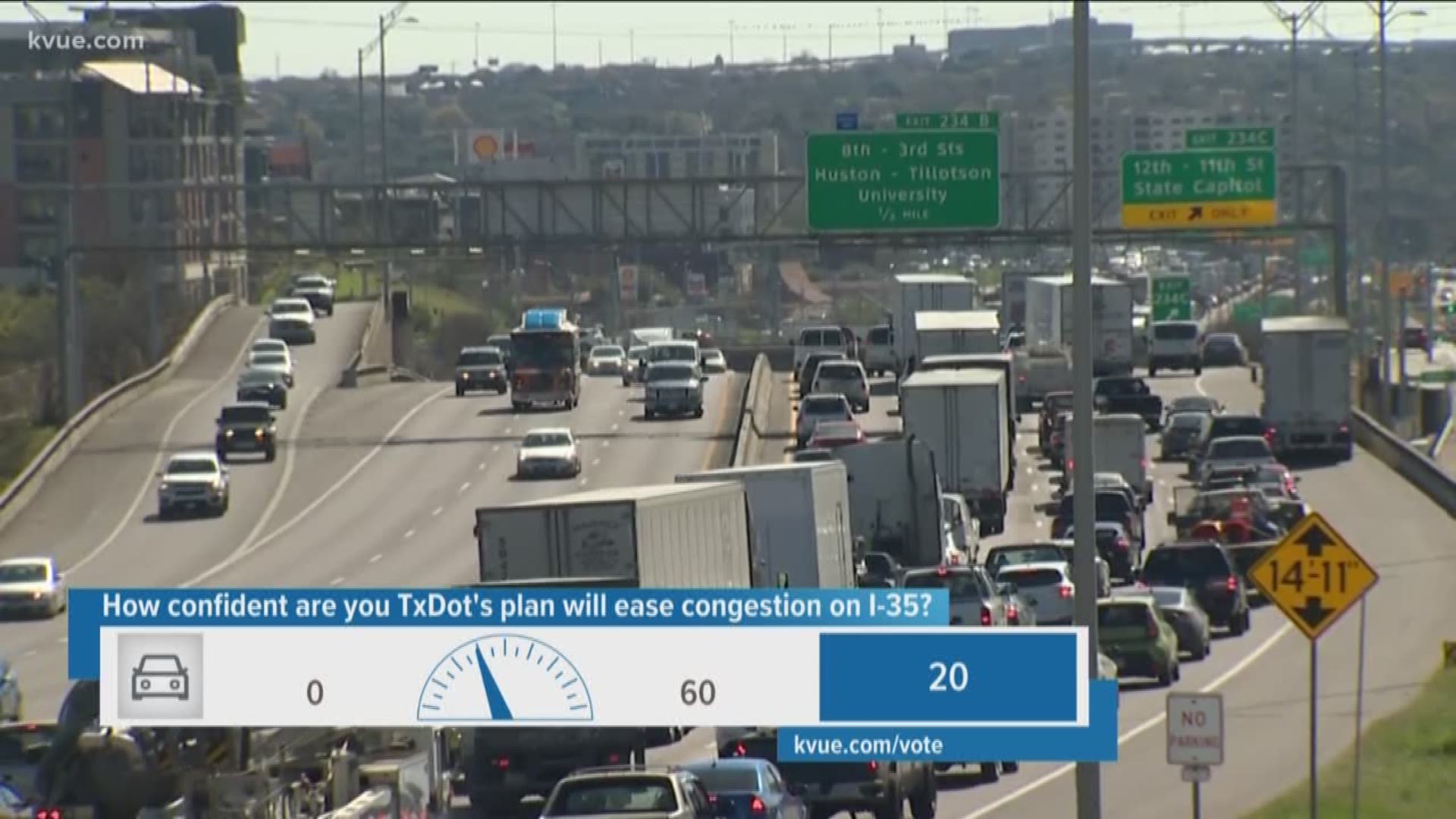 AUSTIN, Texas — A major overhaul of Interstate Highway 35 throughout Austin is one step closer to reality as the Texas Transportation Commission (TTC) is set to fully fund the $7.5 billion project.

In 2019, the Texas Department of Transportation (TxDOT) proposed the changes to I-35 to take place from Round Rock to Buda. The project is aimed at tackling the influx of traffic in the Austin area.

"I-35 represents Main Street Texas. It goes all the way from the Red River to the Rio Grande. And this is a huge choke point for the entire state of Texas," Commission Chairman Bruce Bugg said Thursday. "We now have a solution on the table. The time for talk is over. The time for action is now."

One change that is on the table would be removing the upper levels of I-35 between Airport Boulevard and Downtown Austin while adding "managed lanes" similar to MoPac's toll lanes. The new lanes, however, would not be tolled.

One of the biggest ideas, and one of the most supported by some economic developers, is to lower the highway below ground level.

On Thursday, the commission, which guides TxDOT’s construction targets, presented the plan to fill a $4.3 billion funding gap to build new lanes on I-35 through Austin.

"The fact that the project is going to be fully funded, really makes the project real," said Dewitt Peart, president of the Downtown Austin Alliance.

"At long last," she exclaimed to the commissioners. "IH 35 is the spine that brings not only goods, jobs, economic development, but global competitiveness to our region."

Full funding for the central segment of the I-35 Capital Express Project would require three funding decisions, the first being $3.4 billion in discretionary funding that the Commission will discuss.

The remaining balance will include $300 million from an updated Unified Transportation Plan in August and $600 million previously allocated to the Capital Area Metropolitan Planning Organization.

“With the new funding TxDOT and its partners will be able to move forward, adding two continuous non-tolled managed lanes in each direction along I-35 from U.S. 290 East to U.S. 290 West and State Highway 71,” TxDOT said in a statement on Wednesday. “Additional auxiliary lanes in various places and frontage roads would also be built.”

But that means the $600 million worth of other projects in the Austin region will have to be put on hold, as the funding will be redirected to I-35 improvements. It's still not clear which projects would be affected.

According to TxDOT, this funding will not have any impact on projects in the area currently already in the procurement process, including U.S. 183 North and the Oak Hill Parkway project.

“Chairman Bruce Bugg and the Texas Transportation Commission have made tremendous progress to fully fund and deliver the I-35 Capital Express Project as a non-tolled project,” said Gov. Greg Abbott. “This project will relieve traffic congestion for all those who travel on I-35 through Austin, while helping our capital city meet the needs of a growing population. I thank Chairman Bugg, Commissioners Laura Ryan, Alvin New and Robert Vaughn, and all the key stakeholders for working collaboratively to secure this important funding, and look forward to working with them to address our transportation needs across the state.”

TxDOT said construction may not actually begin until 2025 on the central section of the project. Bugg said total construction time could possibly be expedited to four years, meaning the changes would be fully noticeable by 2029.

"Reduce the time," a resident told the commission Thursday. "Your time that you say here is 9 years best until we can start using it. It's needed today."

The project is necessary, according to TxDOT, to accommodate an additional 116,000 vehicles that are expected to hit the roads between 2016 and 2040.

That's in addition to more than 200,000 vehicles that already use it every day.

As such, Bugg said, "Any further delay in funding improvements to I-35 is simply unacceptable."

The Capital Express Project is one of the key projects involved in the Texas Clear Lanes effort.

Both the Austin Chamber of Commerce and the Downtown Austin Alliance released statements on Thursday applauding the TTC's approval:

"Our mobility challenges are big, and we need big investments to make progress. The Downtown Austin Alliance fully supports the Texas Transportation Commission’s approval to prioritize and fund the transformation of I-35 through central Austin via state and federal taxes.

We thank not only the commission members for their leadership and ability to find a solution to this problem, but also Sen. Kirk Watson for his persistence and commitment to this effort. It is critical to begin improving the highway while planning for future design and mobility options that will benefit all Austinites and better our city for generations to come.

"On behalf of Opportunity Austin and our investors, thank you for your action today in seeing that all of the IH 35 Capital Expressway project is funded and ready to proceed. The inclusion of all sections is a clear indication that this is a high priority project for the state and reaffirms strong statements of commitment to this project recently and publicly expressed by Chairman Bugg and members of the Commission. Additionally, we are most thankful for Governor Abbott’s active involvement with you in the effort to secure this funding solution for IH 35 Capital Expressway.

The economic success of the Central Texas region has been well documented. We have retained our status as one of the fastest-growing regions in the country for the past several years. And we have worked hard to gain and sustain that distinction. Though Opportunity Austin we have helped to add almost 425,000 jobs to the region since 2004.

But with that success comes challenges, and one of those is severe congestion on our roadways. And the roadway most affected is the IH 35 Corridor, also known as “NAFTA highway,” which is critical not only to continued regional mobility and economic health but also to that of Texas statewide and the country.

The IH 35 Capital Expressway is the top priority of our region and stakeholders from along this corridor have come together to support this project. Additionally, our members and volunteers have worked diligently for years to see this project through.

We look forward to partnering with the Commission, TxDOT, and other stakeholders as we move forward. Thank you for your service to Texas."