He faces two charges, according to jail records. 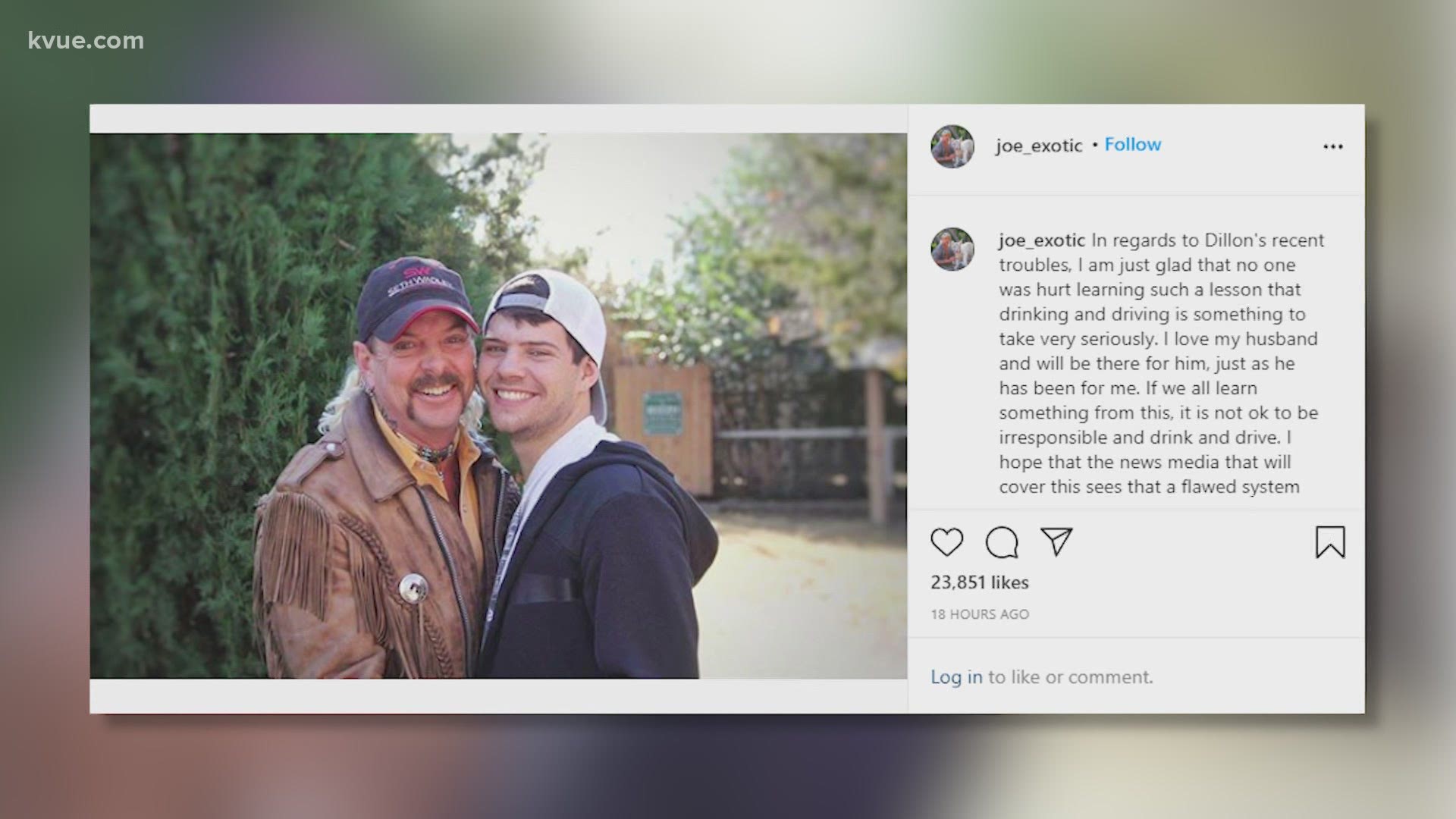 MANOR, Texas — A "Tiger King" star has been arrested in the Austin area.

According to Travis County jail records, Dillon Jacob Passage was arrested by the Manor Police Department and faces two charges: driving while intoxicated and resisting arrest, both misdemeanors.

According to an affidavit for his arrest, Passage was spotted parked on the shoulder on the 13600 block of US 290 without the rear taillights of his 2020 Dodge Challenger illuminated around 1:30 a.m. on Sunday. Concerned that other motorists could strike the vehicle, an officer pulled over to check on his welfare.

Upon speaking with Passage, the officer said he noticed that Passage had slurred speech, glassy and bloodshot eyes and that he detected the scent of alcohol on his breath. Passage reportedly told the officer that he was waiting for his sister and that his car had suddenly turned off.

The affidavit states that Passage also told police that he admitted he had consumed three beers and that he had left 77 Degrees Rooftop Patio Bar at The Domain in Austin and was heading home to Belton, Texas. When asked if he knew which city he was currently in, Passage reportedly told the officer Belton, although they were in Manor. He also reportedly said it was 7 o'clock, instead of 1:30 a.m.

Passage posted a video of himself at an event that night on Instagram, TMZ reported.

According to another affidavit obtained by KVUE, it appears this isn't the first time Passage has been arrested in Travis County.

In 2017, Passage faced a charge of resisting arrest. During that incident, police officers said they found Passage reaching into a car and punching a woman who was sitting in the front seat. When officers tried to speak with him, they said he appeared to be intoxicated and refused to answer questions. At some point during questioning, Passage allegedly tried to run away from officers and tried to hit and kick at the arresting officer.

The 25-year-old is the husband of Joe Exotic, the man at the center of the Netflix documentary series that gripped the TV-watching-world with its eccentric characters and wild plot twists.

It was revealed during the series that Exotic and Passage married in 2017 after Exotic's previous husband accidentally shot and killed himself.

Exotic posted on Instagram on Nov. 15 to address Passage's arrest.

"In regards to Dillon's recent troubles, I am just glad that no one was hurt learning such a lesson that drinking and driving is something to take very seriously," Exotic wrote. "I love my husband and will be there for him, just as he has been for me. If we all learn something from this, it is not OK to be irresponsible and drink and drive. I hope that the news media that will cover this sees that a flawed system not only affects the person’s life, but it also affects that person’s entire family. Alcohol was not a problem for Dillon when I was home."

According to the Fort Worth Star-Telegram, Exotic, whose real name is Joe Maldonado-Passage, is being held at the Federal Medical Center Fort Worth. He was found guilty in 2019 of trying to hire someone to kill Carole Baskin, an animal rights activist featured in "Tiger King."

Get ready for some chilly mornings with sunny afternoons in store