Austin Mayor Steve Adler joined KVUE Daybreak to discuss the protests that happened over the weekend in the city. 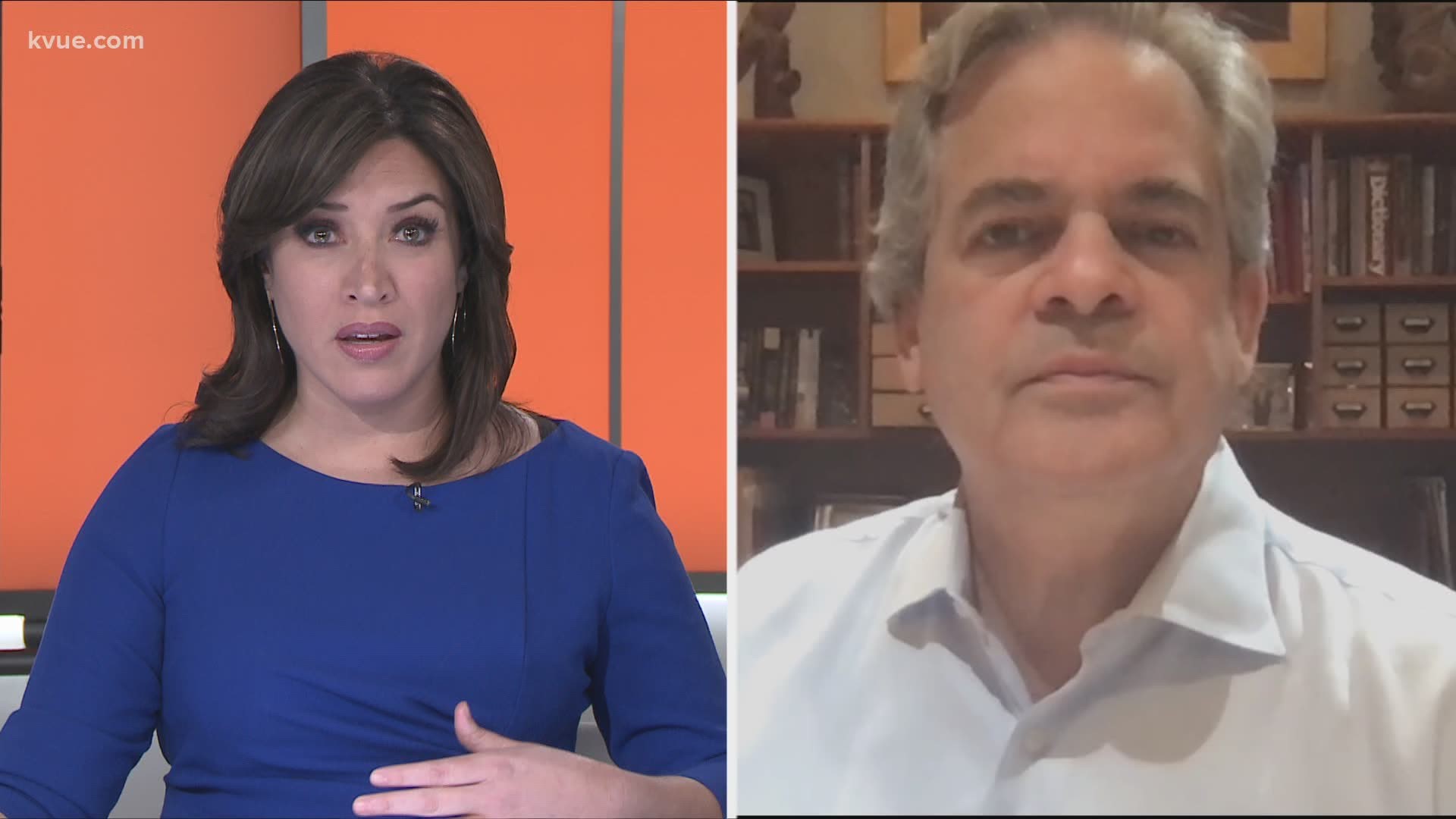 AUSTIN, Texas — Many descended upon Austin over the weekend to protest police brutality and social injustice, highlighting George Floyd and Michael Ramos as the most recent examples.

George Floyd was a Houston native who died while in police custody in Minnesota and Michael Ramos was shot and killed by an Austin police officer in April.

Question: Mayor Adler, on the heels of this weekend's protests we aired some disturbing video moments ago of looting at a downtown liquor store. It shows what appears to be dozens of people running in and out of that store, taking bottles, damaging property. Is there a message that you have for those people clearly taking advantage of this situation?

Adler's answer: Good morning. It's just really disappointing to see. Those people are breaking the law. The owner of that store has now been damaged and hurt. It takes away from any attempt to be messaging about George Floyd or Michael Ramos to participate in something like that. All of those people should be criminally charged.

Question: There was a point over the weekend where police officers used gas there on Interstate Highway 35. What do you say about that method of trying to deter people in this situation?

Adler's answer: I know the whole use – the methods – are something the city council wants to discuss with the manager and with Chief Manley. But I also know it's important for us to keep I-35 open. That's the emergency way back and forth to the trauma center at the hospital. So, it's a road that has to be kept open. And if that's what the case is, then we need to be better at making clear to the public that we need to do whatever to keep that emergency route open. The city police showed a particularly different kind of restraint with the respect that the demonstration was closing City roads. So that is to back off and give people the opportunity for First Amendment expression, but I-35 is something that has to remain open.

Question: My parents used to tell me nothing good happens after midnight. Are you considering a city-wide curfew?

Adler's answer: It's certainly a tool that is always under consideration. It was not a tool that the police chief requested. I was on the phone discussing the matters with the mayors of Houston and Dallas and San Antonio. But the decision was made not to do that. By and large, the demonstrations yesterday were peaceful. The number of incidents the previous night were real limited. They were still egregious as you showed in that video, but still limited last night. So, it's an available tool but not something we used. It's always under consideration.

Question: For those who didn't see the press release you sent out yesterday, explain your decision not to attend the weekend protests.

Adler's answer: You know, it's hard ... this virus is constantly presenting choices to me ... which I don't like either of the options that are available. I understand that the need to speak to the First Amendment issues related to George Floyd and Michael Ramos and the lack of trust and need for accountability and action. At the same time, we are in the middle of a pandemic and I have been consistently been urging people to avoid large groups. I think that's real important – it's going to be important here for a while. I felt that giving the messaging I was doing ... and the concern for the public health of the community, I just couldn't participate and I needed to make people aware of why. I am concerned that there will be people in that group that got infected and don't know it. A group that size, if there is an outbreak, it becomes a super-spreader event. And it's impossible to contact trace or isolate or control. My fingers are crossed that did not happen yesterday, but we are going to be watching for it now and I'm just real concerned about that. People wore masks but there was no real way to social distance.

Question: You recently posted on your Facebook page about George Floyd, Ahmaud Arbery ... you listed a lot of names saying, " I am committed to do what it takes to make this stop." What specific action do you plan on taking?

Adler's answer: I think there are a lot of things we need to do and it begins with changing the culture inside the police department. Quite frankly, it requires a culture change in all of the institutions in this city. We have a history and a legacy of racial discrimination. A lot of it we are seeing, not only with the killings of what is disturbingly a long line of people of color, who are lying down or walking away. Beyond that, we need to have accountability for those actions. I think it was right what the district attorney did on Friday in announcing things would be taken to a grand jury. We need to change the culture in all of our institutions. We need to do a better job at integrating mental health approach to so many of the calls that end up going wrong so that our first response is associated with a mental health outlook.

Question: What type of de-escalation training do Austin police officers go through?

Adler's answer: There is regular de-escalation training as a part of the academy program. Frankly, I don't think that it is enough. As I see events, and I don't understand how so many times someone who is not sought after for a crime that involved deadly force. I think that is something we need to take a look at and change.

Question: In regards to Michael Ramos, a lot of viewers wrote in asking what is Austin doing to prevent this from happening again?

Adler's answer: I saw the same video that the people in the public saw and I spoke about it the very first weekend. I said then and still believe that it is incredibly disturbing for Michael Ramos to be there, with his hands raised saying he doesn't have a gun, and still having an incident that ends up with him being killed. I think accountability is real important. I called for immediate third-party review. I agree with the action taken by the district attorney on Friday in announcing that the case be taken to a grand jury.

Question: Before we go, this is such unprecedented times. So much is taking place with coronavirus and the protests. Is there anything you would like to say to calm down the angst out there?

Adler's answer: I think the first thing is to deal with this long line of names that we see and with this list, the tears and the fears grow. What we see is an eroding trust with law enforcement. Quite frankly, without that measure of trust, we're not a safe city ... we're not a just city. And you can't be a just city without being a safe city. This city council is doing a lot focused on this issue. To end arrests for low-level offenses ... to address the different situations that exist in this city. We've initiated changes in the culture. We've put off the cadet class until we can do a better job. These are the things we've been doing over the last couple of years. Taking money from public safety and moving it toward social services that help us prevent public safety incidents. There is still a lot of work to do and it needs to move more quickly. But we are also an incredibly safe city. We have law enforcement personnel that are some of the best anywhere. They were out this weekend and I applaud the restraint that you could see in so many places. These are hard times and these are hard issues. Race is a hard thing to talk about and, because of that, I think there are a lot of people who look like me that need to spend more time listening. We have to come out of this virus and out of this time a better city than we went into it. I think we can do it but it's going to require accountability and it's going to require action.