In an interview, Ken Paxton said other states have a "real problem" with credibility. 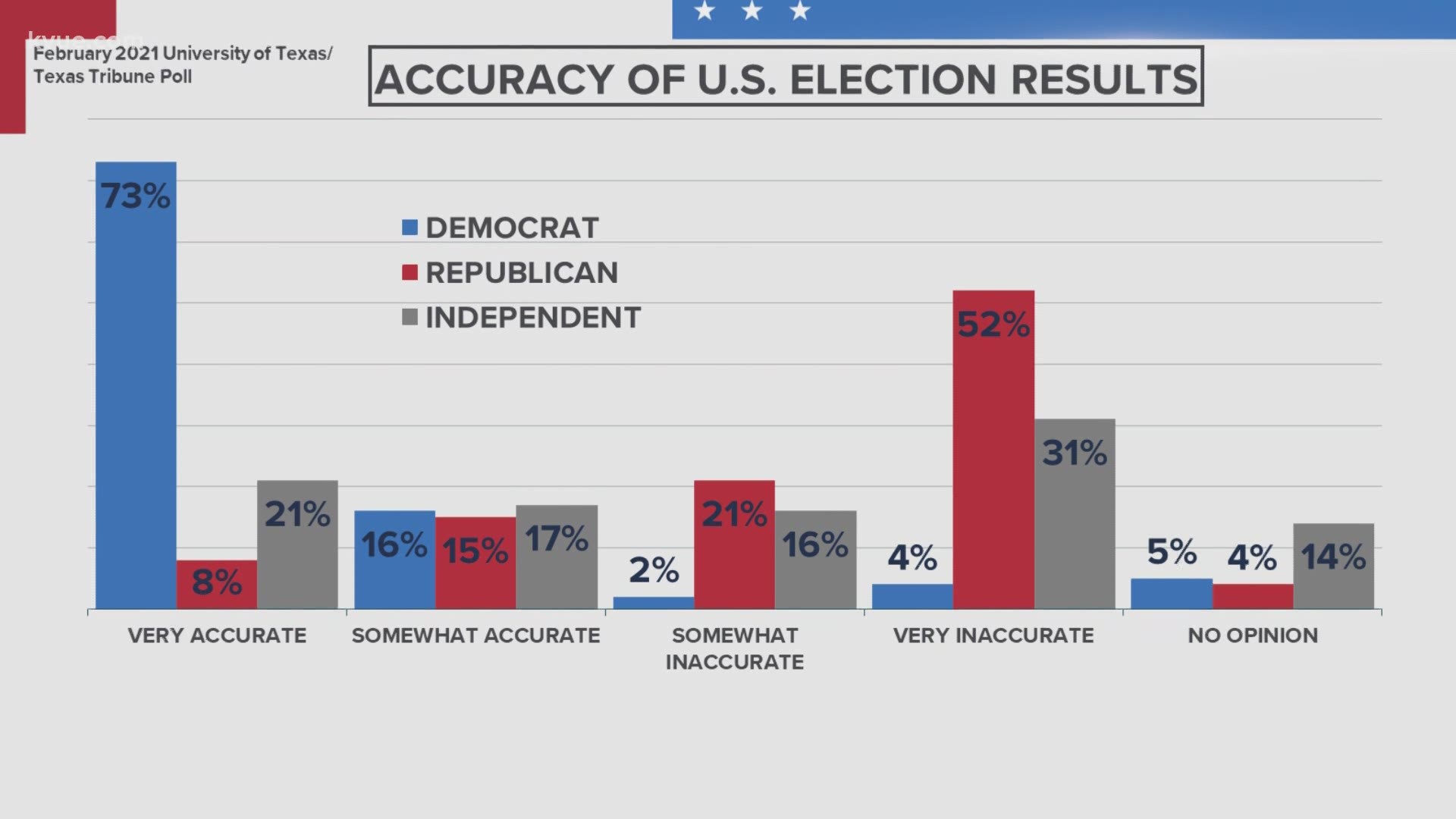 AUSTIN, Texas — If you ask your neighbors just how accurate they think U.S. election results are, their answers might surprise you.

The latest University of Texas/Texas Tribune poll found only about one-third of Texas voters think the results are "very accurate" and nearly just as many think they're "very inaccurate."

If you dig deeper into the data, it turns out a person's political party plays a big role in their opinion.

This distrust was likely heightened among partisans by the 2020 election.

"It's particularly disappointing because, clearly, the former president and the White House at the time helped feed that false impression that the election lacked integrity," said David Becker, founder and executive director of the nonpartisan Center for Election Innovation and Research.

"I just want to stress, election integrity is a good thing," Becker said.

This MUST be a top priority! https://t.co/KEt3ucUcBL

During the interview, Paxton said, "there are certain states where we still control legislatures and we still have governors."

"I would encourage them to work with the legislature in those states and make sure that their laws are tightened up," he added.

Paxton specifically called out states without voter ID laws and those with mail-in ballots and no signature verification.

"You've got a real problem having any credibility in your elections, and that harms democracy," Paxton told the reporter.

Becker said this messaging is problematic and pointed out that given the court battles before and after the November 2020 election and the re-counts of the results, the last presidential election was the most transparent and secure in American history. He also said Paxton's message is counterproductive to politicians who need members of their parties to trust and participate in elections. Plus, it may not be well received.

"I would ask anyone in the State of Texas how they would feel if someone from outside the state of Texas told them how to run their elections. And I think we would know what the answer to that is," Becker said.

And Becker, who has worked in elections for more than two decades, said Texas needs to do some tightening up of its own.

"Texas is one of the very few states that doesn't require paper ballots that can be audited and recounted after an election," Becker pointed out.

He also said there are questions about Texas' voter rolls, which caused a lot of controversy in 2019.

Election integrity is one of Gov. Greg Abbott's top legislative priorities and, this session, lawmakers will debate numerous election bills to hopefully restore the faith Texans have in a system vital to democracy.

Biden sets May 1 target to have all adults vaccine-eligible