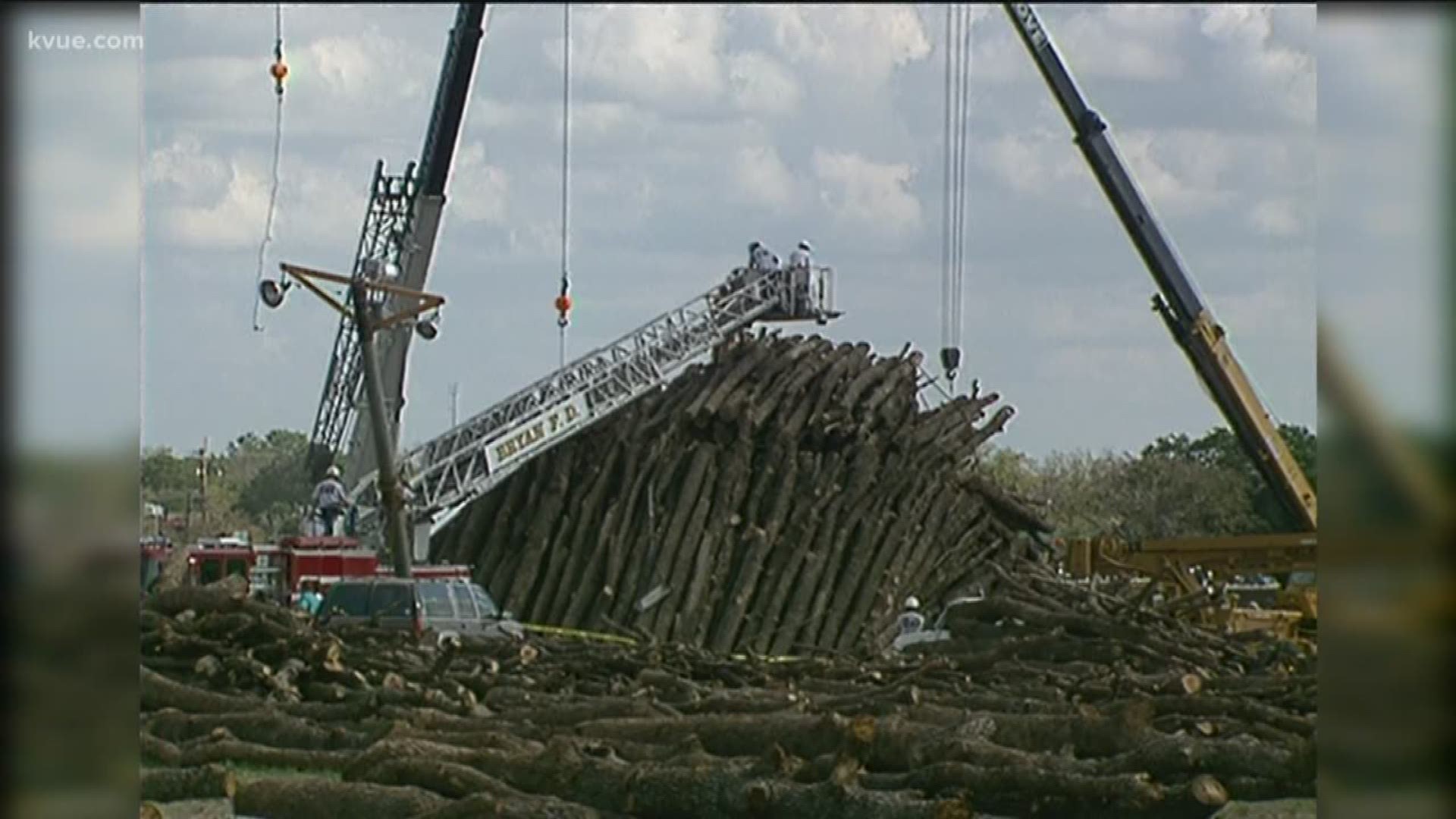 Hundreds showed up to the Bonfire Memorial site on campus Monday morning to honor the 12 people who died and the 27 others injured. They held candles to remember the exact moment when the bonfire stack fell apart at 2:42 a.m.

One of them is Chris Breen from Austin. His brother, Sean, along with family members, honored him with a special ceremony the day before.

"We think of him every single day. Not a day goes by ... There's something that happens every day," Sean said.

Sean has so many recollections of his little brother: an outdoorsman, people lover, a maverick.

Chris attended Texas A&M while six other siblings chose the family tradition of attending the University of Texas, where their father is an engineer.

"It was a little shocking at first, I got to tell you, and he took a lot of grief for it, but he could dish it out as well as he could take it," Sean said.

While Sean treasures those memories, there are others that are almost haunting.

"When I was getting my two small boys up in the morning to take them to kindergarten, noticed that I had about 40 missed calls on my telephone," said Sean. "I called my parents house and was told the news ... he was there on top of the stack with some fellow Brown Pots when it collapsed ... when we went by the stack on the way to the hospital that they made into a makeshift morgue, I think the thing that struck me most was the size, the unbelievable size of it, and really the catastrophic failure. I remember thinking I just didn't understand how something that big could have collapsed in the way that it did ... of course at the time it's disbelief,  you just don't believe it ... he was just full of life. He was young, he was only 25 at the time. Like a lot of people, you don't believe, you refuse to want to believe that it actually happened. You just think it was a bad dream."

As one family prepared to say goodbye, another Aggie fought to live.

RELATED: BONFIRE: A look back at more than a century of the Aggie tradition

John Comstock was 19 years old when he nearly died.

"Everything happened pretty suddenly. I want to say the whole thing maybe took five seconds just enough for me to have my balance off," he said. "I couldn't fall off backwards. It would have been extremely horrible for me, I would have landed right in the middle of vertical logs, so I was thrown off balance and I basically grabbed the logs in front of me and the structure at that point was already starting to tip and go. It basically went down, I was holding on, and it slammed me to the ground. I was knocked out for a few seconds and when I opened my eyes I got a fist full of dirt because it had shot up all the dust. Everything was dark at that point. All the lights had been shattered because they were kind of connected to the structure, so the site went completely dark."

Comstock was nearly buried alive, underneath logs for seven-and-a-half hours.

"I realized I was completely trapped," he said. "I had a log on my head, one across my waist and, of course, two between where I held onto to the structure and the only thing free was my left arm. So I wave that in the dirt, somebody ran up and grabbed my hand and said the EMTs know where you are, they're on their way. I have to go help other people but, you know, hold tight. That was a real blessing for me because it put me in a calm state of mind."

By the time rescuers got to him, Comstock was near death. His injuries were so bad that Texas A&M prepared a press release announcing his death.

"I had a fractured skull, two of my molars were cracked from the fall, my liver was split ... the impact from the ground," he said. "My pelvis was kind of flattened. My right wrist was broken. My left ankle was crushed as well. And, as a result of being trapped for so long, his body starting building up toxins which cause his heart to stop. That's why my heart had stopped when they got me out and, of course, organs kind of shut down over the process the next few days so my kidneys pretty much quit, had to start dialysis ... they were giving me three bags of blood at one time and they just couldn't change them out fast enough and they ultimately told my mom because he's taken so much blood, he'll have no clotting factor left so he'll just bleed out tonight, so they told her to just go back and wait for the phone call."

Comstock now has that same press release framed and hanging up in his home, a reminder of a tragedy that he hopes will never happen again.

Sean's reminders, in the meantime, include a poem engraved on his brother's memorial.

Sean read us part of that poem.

"Do not stand at my grave and weep. I am not here. I do not sleep."