Gov. Greg Abbott could allow more businesses to open and capacity limits to increase May 18, but he says it will depend on COVID-19 hospitalizations and fatalities. 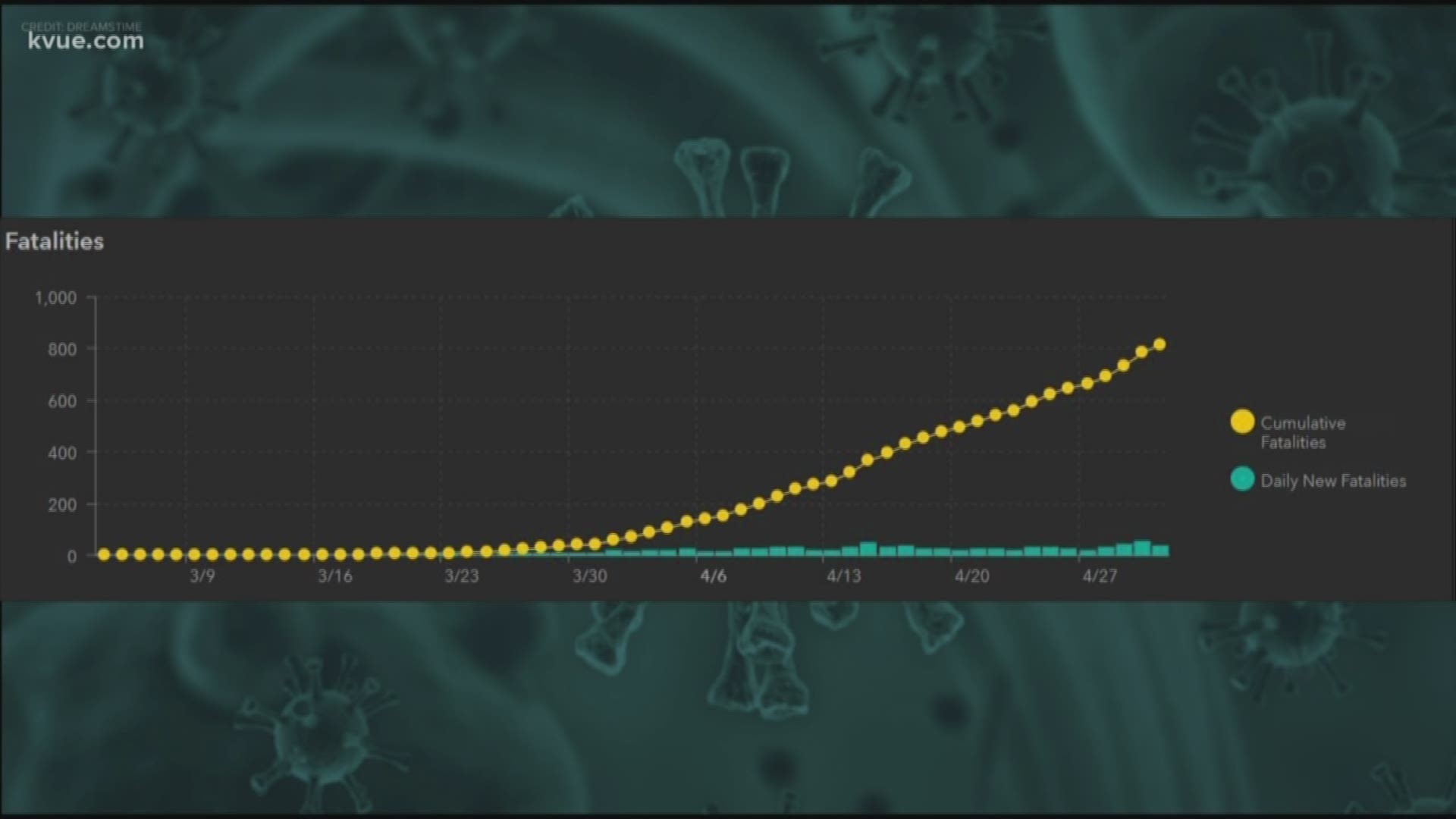 AUSTIN, Texas — Following an order from Gov. Greg Abbott, businesses across Texas re-opened to customers with capacity limits Friday, May 1. As the governor considers allowing additional openings and increased capacity limits in two weeks, he said he will watch two metrics –  COVID-19 hospitalizations and fatalities.

"What really matters are these two metrics – what is our hospitalization rate and what is the death rate," Gov. Abbott told KVUE in a live interview Tuesday. "Understand that Texas has either the third or fourth best – meaning lowest – death rate in the United States."

Data released from the state about the number of COVID-19 deaths and hospitalizations is causing concern for some.

The trend graph from the Texas Department of State Health Services (DSHS) shows from Tuesday to Thursday this week, the number of COVID-19 related deaths steadily increased and peaked at 50 deaths Thursday, the most Texas has reported in a single day. Friday, the data showed 34 people died.

Tracking hospitalizations is proving to be a bit more complex. The DSHS does not provide a trend graph or a cumulative report. When KVUE requested data for the month of April, DSHS staff replied in an email stating, "since hospital stays vary, we don’t know the number of unique patients hospitalized over time."

But according to the daily report on the agency's website, 1,686 people in Texas were hospitalized due to COVID-19 on Thursday. On Friday, that number had increased to 1,778.

Still the overall trend of cases, hospitalizations and fatalities relative to the number of Texans being tested for COVID-19 is one Gov. Abbott felt comfortable enough with to begin the process of re-opening. But even then, political analysts say his reopening plan and comments show he is cautiously comfortable.

"There's a little bit of politics here and there's a little bit of experimentation," said Ross Ramsey, co-founder and executive editor of The Texas Tribune. "Part of it is, he said, 'I'm not saying these businesses have to open. And I'm not saying anybody has to leave their homes. So if you're more comfortable at home, stay there, if you're more comfortable closed or you don't feel like it's safe to open your business or it's not profitable at 25%, don't open it.' So it's kind of having it both ways."

Ramsey said with political pressure on both sides, largely from Republicans to re-open and Democrats to remain closed, Gov. Abbott appears to be putting party politics aside to some degree and doing what Texans have expressed that they want.

Some Central Texas counties could qualify for looser restrictions

Number of confirmed COVID-19 cases continues to rise in Texas