SAN MARCOS, Texas — The Texas State University board of regents voted Thursday afternoon to fire a professor accused of sexual misconduct and to revoke his tenure.

The vote came with a recommendation by the university's Rules and Regulations Committee, which supported the university president's prior decisions to fire Department of Health and Human Performance Professor Dr. David Wiley.

The university employees alleged Dr. Wiley "sexually harassed them over a period of years," according to a court document.

When Dr. Wiley was notified of the investigations in March 2018, he claimed the Title IX findings were based on "'thinly-supported reports.'"

He filed a lawsuit against the university in October 2018, claiming the university's investigation into the allegations violated his due process rights. A federal judge dismissed his lawsuit in January 2019.

You can read the Motion to Dismiss below: 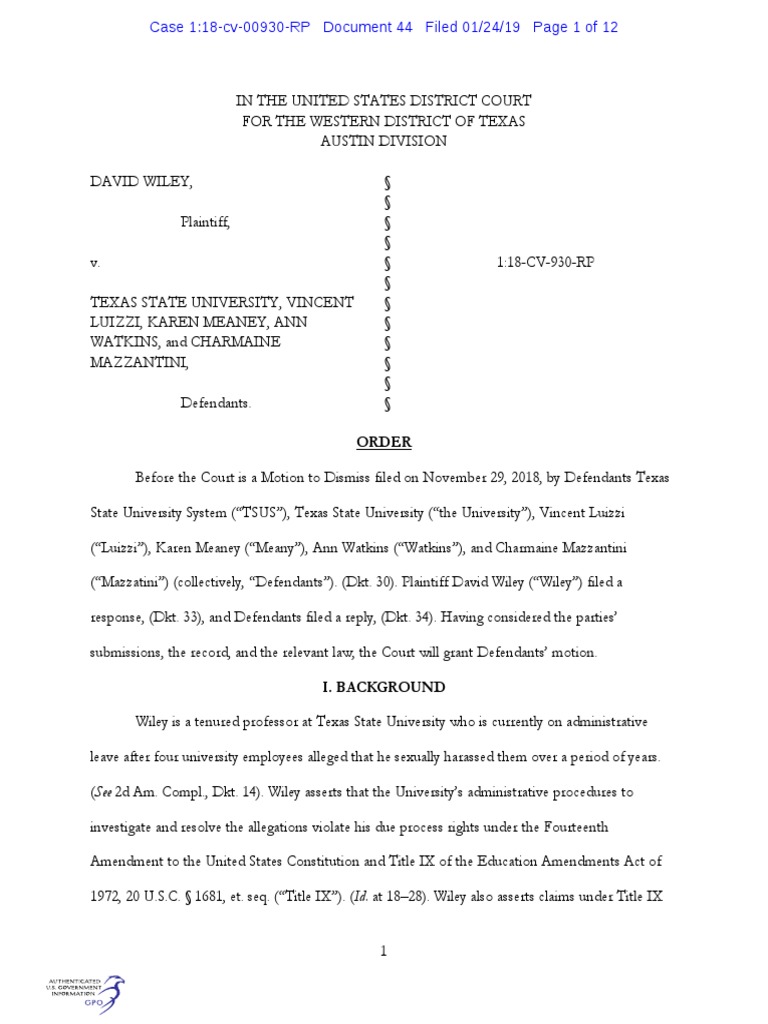 "On February 13, 2020, the Texas State University System Board of Regents voted to approve the Texas State University President’s May 2, 2019, affirmation of a faculty Hearing Tribunal’s adverse findings of sexual misconduct and recommended sanction of Dr. David Wiley. The Board of Regents also approved the President’s October 2, 2019, decision to revoke the tenure and terminate the employment of Dr. Wiley, following a second faculty Hearing Tribunal’s findings of sexual misconduct and recommendation to revoke Dr. Wiley’s tenure and terminate his employment with Texas State University.

The above-referenced two hearings – conducted by separate hearing tribunals, each consisting of five tenured full professors – were part of a multi-step, formal process used to adjudicate such complaints. Due to a pending matter before a regulatory agency, the university is unable to provide additional information at this time."

At least 40 Texas State University employees filed sexual misconduct complaints between 2015 and 2019, according to an open-records request filed by KVUE investigative reporter Brad Streicher. Only nine of those resulted in a violation.

Texas State officials have not stated how many of those complaints were filed against Wiley.

Wiley's team of attornies released the following statement on Friday:

"The prior dismissal in federal court ruled that Dr. Wiley first had to complete the long and arduous appeal process imposed by Texas State University before taking his case to the courts. Now that the TSUS Board of Regents has issued its decision, Dr. Wiley can finally begin a process where we hope his rights will be honored and protected by the court system. The Title IX process in higher education is failing everyone involved. For better or worse, Dr. Wiley's case will help to expose the broken Title IX system and how it failed to protect his rights as a tenured faculty member at Texas State University."

Driver airlifted to hospital after crash with school bus in Bastrop