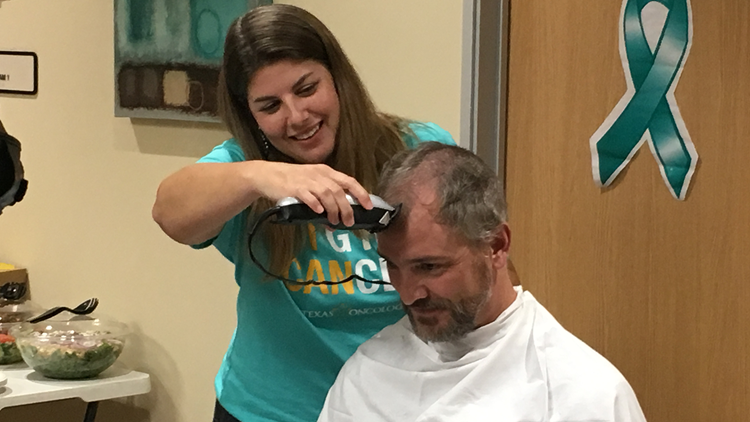 AUSTIN — It's no secret that chemotherapy can cause patients to lose their hair, but one Texas doctor let his patients shave his head instead.

"Trying to think of something fun to do with the patients that might give them a laugh. I figured they lose their hair for me on almost a daily basis. I figured I’d return the favor so to speak,” said Doctor Paul Loar at Texas Oncology.

He sees patients with Gynecologic cancers, like cervical, ovary and endometrial.

"One of the major side effects we see is hair loss,” said Loar.

She was diagnosed with cancer more than six years ago and now its back.

Each time she has lost her hair.

"It's very difficult because we're raised to put so much import on personal and physical attribute," said Fivecoat.

The first time she lost her hair, she cried.

“When you lose your hair, you haven't even realized yet that you're going to lose your eyelashes and your eyebrows,” said Thomure.

"It's a big deal for a lot of others to undergo and accept,” said Loar.

That’s why Loar is letting them turn the tables and shave his head.

But these patients said they've learned it's about more than just their locks of hair.

"You begin to think about who you really are, not just what you look like,” said Fivecoat.

"You just want to get well and it gets to a point where you don't really care what you look like,” said Thomure.

With a few hairs lost, a lot of smiles grew.

"I have the best doctor out there,” said Thomure.

"He made me not give up,” said Fivecoat.

And that’s worth every last strand.

This Saturday, you can participate in the 11th Annual Run/Walk to Break the Silence on Ovarian Cancer. For more information about this event, click here.