'It's going to get much worse before it gets better.' Advisor on Texas COVID-19 strike force talks cases and vaccine distribution

A chief medical advisor on Gov. Greg Abbott's strike force details vaccine distribution, says Austin hospitals would be one of the first to get doses of the vaccine. 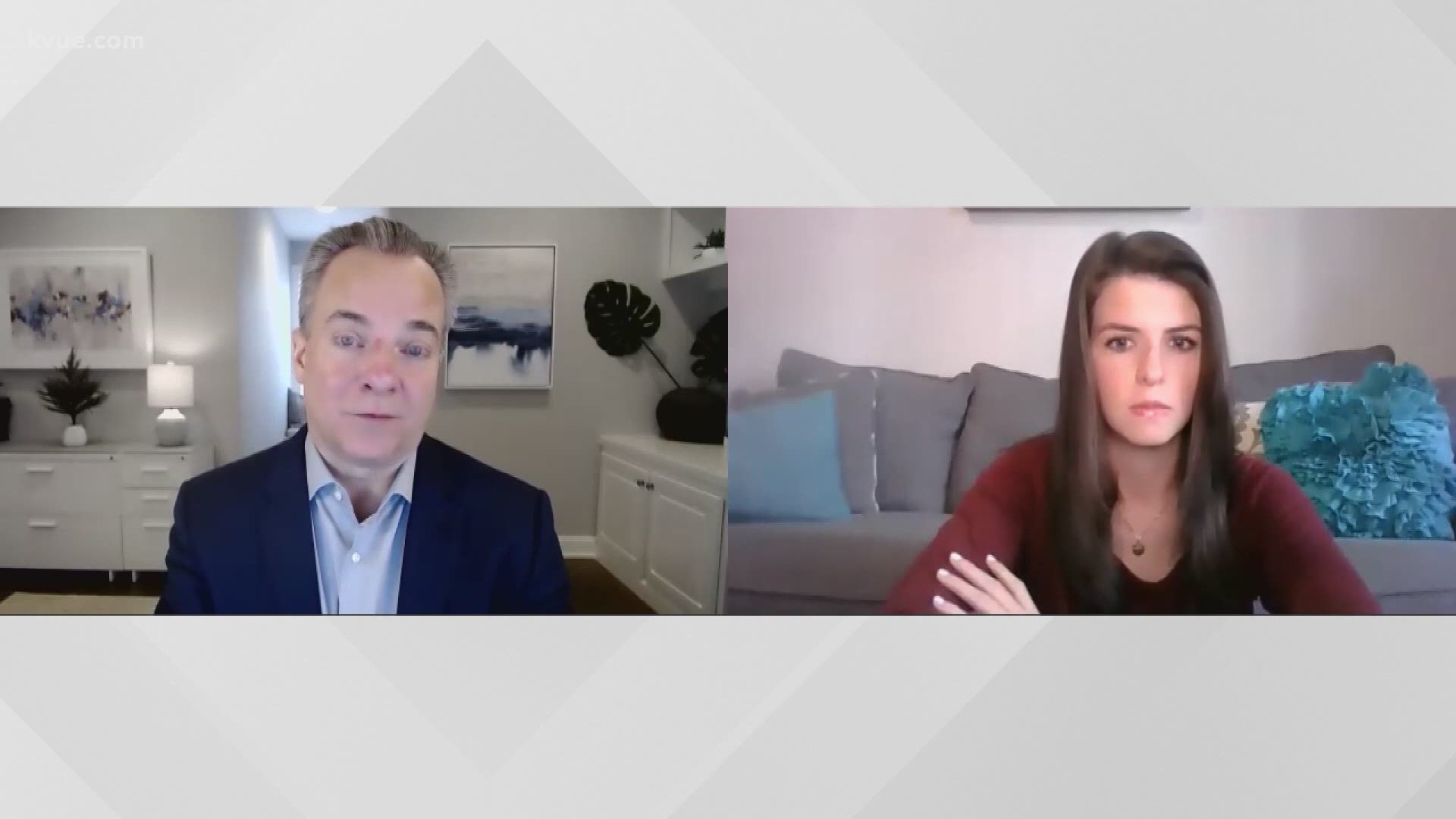 AUSTIN, Texas — Dr. Mark McClellan is the director of the Duke-Margolis Center for Health Policy and a chief medical advisor on Gov. Greg Abbott's strike force.

KVUE spoke with him about recent vaccine news, what distribution will look like in Texas, and if he thinks there should be more restrictions as case numbers rise.

What is your reaction to the news of Moderna filing for approval?

"This is another round of good news on the vaccine front. It's likely that if things stay on track, we'll have not one but two vaccines available for emergency use in the highest risk individuals – health care workers, older Americans in nursing homes – before the end of the year. And behind these first two vaccines, there are additional vaccines that are also being manufactured in large supply that could be available in the first quarter of 2021. It's really incredible progress, but it is important to remember that it takes time for vaccines to have their effect. You need two doses to allow time for an immune response to occur. So for the very tough challenges that we're going through right now, these very big surges, we cannot ease up on any of the steps that we know work ahead of being able to rely on large scale vaccine availability. That's still months away."

More details on Moderna and Pfizer vaccines from McClellan

"The Moderna and Pfizer vaccines are based on a new approach, RNA basically asking your body to synthesize a piece of the virus and then you create immune reaction to it. The other vaccines that are coming along in early, 2021, if they stay on track, work through a somewhat different mechanism. But they also attack the same part of the virus, the spike protein the virus uses to attach to your cells. And so there's a lot of reason to think that those vaccines are going to be effective as well. So, again, very good news for the months ahead. Still a very challenging time in the weeks ahead with the big surges in cases that we're seeing really all over the country but including in Texas."

What does vaccine preparation and distribution look like for Texas?

"Well, there's a lot of preparation going on right now. The first places to get the vaccines in Texas will be the health care organizations that have been really hard hit. And so those organizations like Dell Medical in Austin and Ascension Health Care and others are preparing right now for informing their employees about the vaccines and starting to vaccinate them. It's probably going to take, because we've got 20 million-plus health care workers, a couple of months at least before the vaccines are broadly available to all of them. And again, it's two doses and 21, 28 days apart and a little bit of time after that for the immunity to kick in."

Aside from hospitals, where/who else will get the first doses?

"The other places that will be getting early access in Texas include nursing homes. And the federal government has set up a special arrangement to bring in partners from the private sector, like CVS or Walgreens, to vaccinate as many people in a nursing home as wanted. So those are going to be the earliest access, potentially in December. After that, there are a lot of other people in high-risk groups, the rest of the elderly population, people who have obesity, people with serious chronic conditions. A lot of them are in essential health worker jobs, so come January, February, March, most of the focus is going to be on increasing access for vaccines for those groups. And that's a lot of people, so it's going to take some time, some months for most of those individuals who want to be vaccinated to get it."

When will the vaccine be available to people outside of the high-risk groups?

"The vaccines probably won't be available to the broader adult population – people under 60, people who don't have any other serious health problems – until end of the spring of 2021 if things continue to go well. And we haven't yet done large-scale vaccine testing on children yet. I expect some of those studies will really get going in early '21. Remember, children have the lowest risk of complications, so that's not where the focus was in starting to learn about vaccines. But they will be part of studies probably in 2021. And so it's probably not going to be until later 2021 that you'd see really broad use of vaccines. And, as you said, in the meantime, it's important to keep up the measures that we really know work and can prevent spread: masks, not gathering in large groups, especially indoors, keeping distance, washing hands frequently. They're basic steps, but especially with cases surging around the country and ICU's getting very full in many parts of Texas, they're really important to follow right now."

How is it decided which cities or what hospitals will receive those doses first?

"The federal government's working very closely with state leaders. So the governor and his public health advisors to take the amount of vaccine that's available, that's allocated to the different states and work with them on getting to the places that are needed. So there's some national guidance on this available from the federal government that's going to get refined as more vaccines become available and we start thinking about vaccinations going beyond places like health care facilities and nursing homes and into other high risk populations, including people who are over 65 or have chronic diseases and communities that have been hard hit, including lower income communities, communities of color, as well as efforts to reach other essential worker populations, older teachers, for example, will be a very important group to vaccinate, to help with safe school reopening, so those will be part of the efforts come early '21. And it's going to be a collaboration between the federal government overseeing the the the supply and allocating that supply to different states and then the states, using guidance from the federal government, including the Centers for Disease Control, to decide which are the priority places to to get vaccines out. And come '21, a lot of that's going to be through health care organizations. They're the ones who are closest to people in their communities who are at high risk. There will also be efforts through social groups, community centers, community leaders to help get people aware of the benefits of the vaccines as well as the risks again. Right now, the evidence looks really good for benefits outweighing risk, but people have been understandably skeptical about new vaccines. A lot of communication efforts ahead, as well as deciding where the vaccines exactly should go."

Thoughts on the recent surge in case numbers, especially considering we just wrapped up Thanksgiving and are heading into Christmas?

"Yeah, unfortunately, Molly, I think it's going to get much worse before it gets better. We have seen cases at the highest level ever in the United States and more deaths, as well, more places across the country with the health care systems being stressed. And now we're better prepared than we were for the earlier waves, the one in the spring, the one in, that affected Texas so much, in the summer. But it's so much more widespread now. There's no community, especially rural communities, that that were less hard hit before, virtually no community being spared now. And so it's just really important, even though people are tired of it, to take those steps that we know work that might include a need for more restrictions on businesses, especially if we don't see the case rates slow down for getting to a point where health systems are are overwhelmed. That's just not sustainable. And people aren't going to want to go out and and eat and spend money anyway."

Do you think Texas should go back to more restrictions?

"Well, my view is that we do need to take more restrictions in areas where we're having tougher outbreaks, but unlike what we did in the spring – in the spring, we didn't really know where COVID was. We took a big national approach. And that's not the most effective way to contain outbreaks. The most effective way is to tailor the steps that are needed locally to head off the need for really drastic steps. So by taking steps like reducing restaurant occupancy or maybe going temporarily for a few weeks to just take out service or outdoor service, I know it's tougher in the winter, doing the same thing with bars, doing the same thing with gyms. Those are limited steps locally that can really help get a spread under control. Those aren't the only steps that matter. You know, mask requirements definitely help, and really trying to engage people in communities on reminding them that it's just as easy to spread COVID if you get 20 people together at your house as it is at a bar or restaurant. But I do think further steps locally can head off the need for more drastic steps. And I think we're seeing some effective ways of doing that around the country. And it's something that Texas should consider as well."