Tech Tuesday: A heart monitor you can check on your smartphone

The device is inserted in a patient's chest and then "will automatically communicate wirelessly to a receiver." In this case, it's connected to an app on your smart phone. 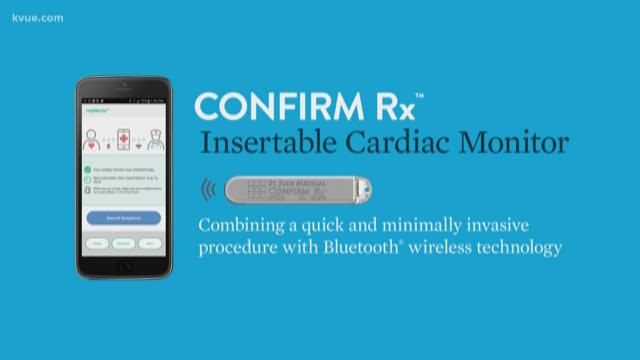 In the tech world, you might often hear the phrase "there's an app for that."

Well, as KVUE's Jason Puckett learned, there's even an app for monitoring your own heartbeat -- provided you have the right implant of course.

It's called Confirm RX Insertable Cardiac Monitor or "an ICM."

Dr. Rodney Horton is a cardiac electrophysiologist at Texas Cardiac Arrhythmia Institute at St. David's Medical Center. As he explained, the device is inserted in a patient's chest and then "will automatically communicate wirelessly to a receiver."

In this case, that receiver is a smartphone. The patient's device will measure irregular heart rhythms and pass the measurements on to the doctors.

"It's a device that's literally punched into the skin," Dr. Horton said. "It takes about 8-10 seconds to put it in. It runs on batteries and records if any disturbances happen within three years."

So why would someone want one of these?

Well, according to Horton, it makes monitoring patients with Atrial Fibrillation (AFib) and folks prone to fainting and strokes easier to monitor.

"If someone had a life-threatening event with one of these devices in," he said, "it would of course detect it ant notify us in a matter of minutes."

KVUE's Jason Puckett spoke with a local 72-year-old man who was already using the device. To see his experience and thoughts on the device, watch the video above.

The ​Texas Cardiac Arrhythmia Institute at St. David's Medical Center wi​ll​ host the fourth international EPLive 2018 symposium ​later this week​. Hundreds of experts ​from across the globe ​will ​learn more about t​he Confirm RX ICM and a number of other technologies on the cutting edge of treatment connected to complex heart arrhythmias.