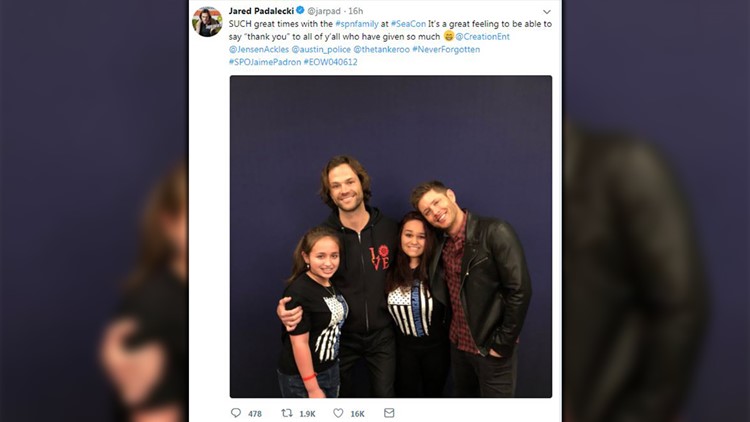 AUSTIN -- Just about every "Supernatural" fan knows leading stars Jared Padalecki and Jensen Ackles spend a lot of time in Austin, but not everyone knows the ways they give back to the community.

The stars took some time this week during Creation Entertainment's "SeaCon" to meet with Ari and Livi Padron, daughters of fallen Austin police officer Jaime Padron. Jaime Padron was shot and killed in 2012 while responding to a shoplifting call at an area Walmart.

'Supernatural' star and family raise more than $100,000 for Harvey victims

Both the Austin Police Department and actor Padalecki himself shared photos of the meetup with Ari and Livi, who were wearing shirts depicting "Supernatural" imposed on the "Thin Blue Line" American flag, a symbol recognizing police.

SUCH great times with the #spnfamily at #SeaCon It’s a great feeling to be able to say “thank you” to all of y’all who have given so much 😁@CreationEnt @JensenAckles @austin_police @thetankeroo #NeverForgotten #SPOJaimePadron #EOW040612 pic.twitter.com/tIgDI7w7Z5

"SUCH great times with the #spnfamily at #SeaCon It’s a great feeling to be able to say “thank you” to all of y’all who have given so much," Padalecki wrote in the tweet.

On Instagram, the Austin Police Department thanked the actors for their love and support shown to the girls, who lost their father when they were only 6 and 10 years old.

@jaredpadalecki @jensenackles @creationent and #spnfamily Thanks for the support and love shown to Ari and Livi Padron. Who lost their father SPO. Jamie Padron while protecting our community. The girls were only 6 and 10 years of age at the time. Thank you for remembering and honoring Jaime! #neverforget #EOW040612 #spn #3259

"The past 6 years have been rough (to say the least)," commented Padron's former wife, Amy Cox Padron. "This past weekend, my girls were so excited and happy thanks to @jaredpadalecki and @jensenackles. I became their biggest fan, not for what they do for a living, but for who they are as people. Thank you so much for your empathy and extra attention. You made my girls day, month, year a little brighter."