At the Caring Santa event at Lakeline Mall, only a few families can see Santa at a time. 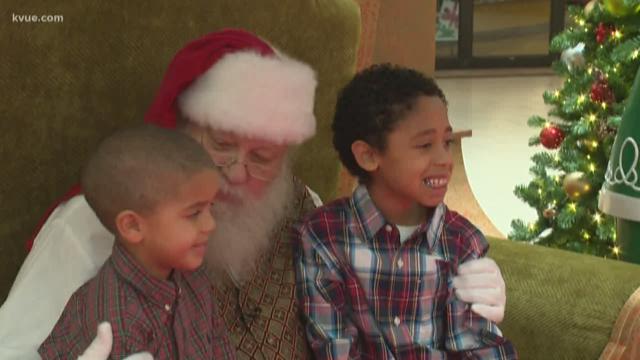 Inside Lakeline Mall on a Sunday morning, few businesses were open before noon: the AMC theatre and Starbucks.

Just outside Dillard's, however, is a small gathering of parents and children, waiting to see Santa Claus.

Tis the season to take pictures with Santa. It is a must for many families this time of year.

A tradition that is usually filled with hour-long waits, frustration and upset parents and kids.

"It's a lot of chaos with the shoppers doing the Christmas shopping," said John Arzola.

The father of two said it's just downright crazy.

"It's treacherous -- maybe an hour, over an hour wait. It was kind of upsetting. The guys didn't get to enjoy it because the lines were so long," said Arzola.

Now, add special needs children to the mix, and you can see just how stressful the tradition can be for Arzola and other parents like him.

That's why Arzola made an appointment for the Caring Santa event at Lakeline Mall Sunday. Here, only a few families can see Santa at a time. Here, calm, quiet conversations with the big guy are the norm.

"It's quiet and there's no line," said Ross Patel.

Patel and his wife, Erin, brought their three children to see Santa. Their oldest is on the autism spectrum. Patel said five-year-old Nolan has trouble controlling his emotions, is intense and has trouble concentrating.

"Santa can talk slowly to him, so he can understand what he's saying and it helps him not get overwhelmed with a lot of noises and things and he can focus on seeing Santa," said the mother of three.

Patel said she was actually free to think about other things like picking out the perfect Christmas picture.

"It makes my day less stressful and it makes us have a good experience around Christmas, which is something I grew up with, so I want to share it with my children," said Patel.