There have been more than 20 reported instances where trains were stopped at a crossing that is currently the only way in or out of the Mount Pleasant neighborhood. 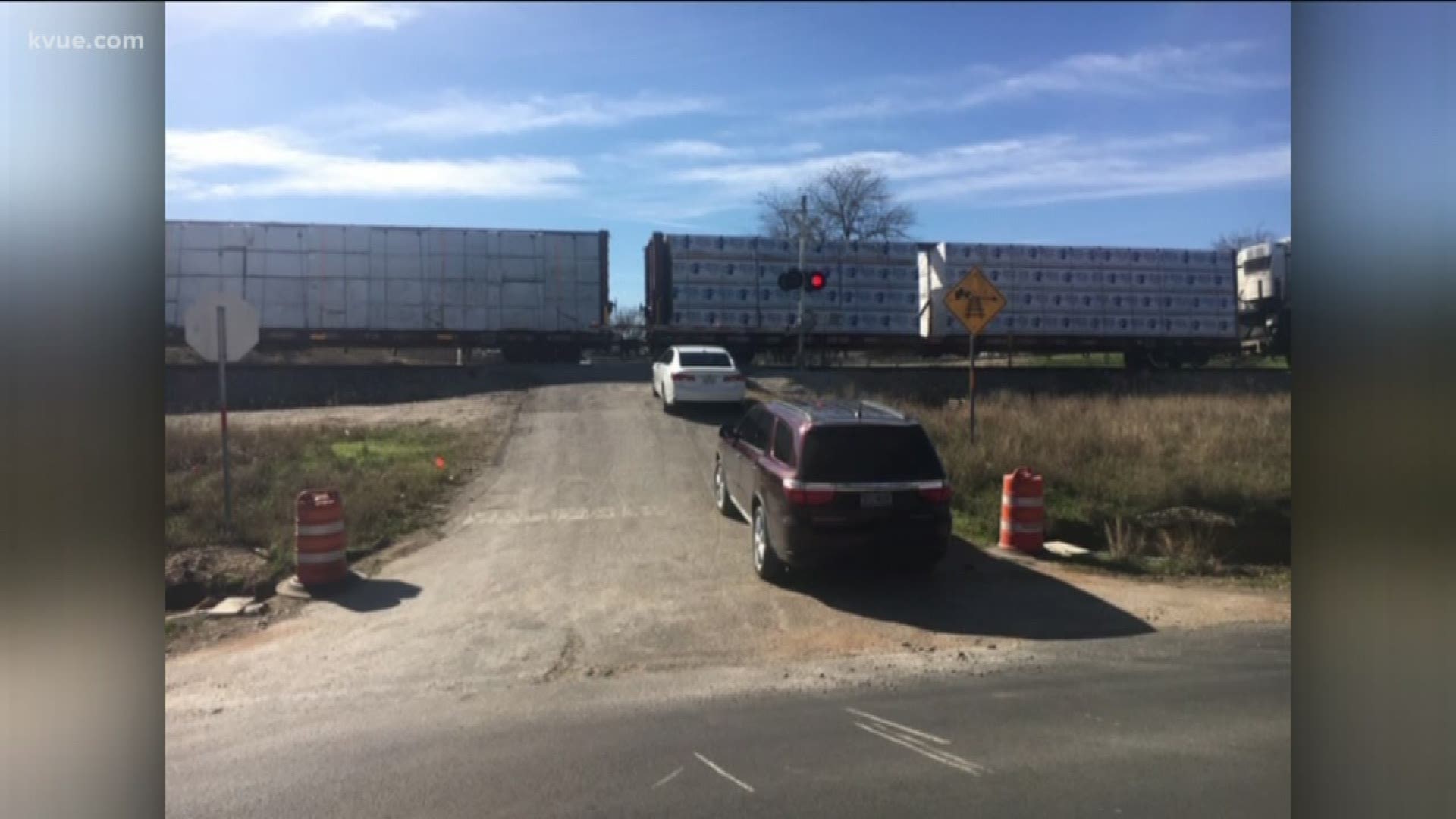 SMITHVILLE, Texas — Usually, there are two ways to get in or out of the Mount Pleasant subdivision in Smithville, commonly known as "The Hill." One was by taking the 4th Avenue Bridge, which was closed on Nov. 20 for plans of a new design. The other – temporarily the only option – is crossing the railroad tracks at the corner of Live Oak Street and FM 2571.

But recently, some neighbors said that they have found themselves stuck at the Union Pacific crossing for long periods of time because of trains that are stopped there.

“This issue with Union Pacific of blocking this crossing is of great concern to our community," Smithville City Manager Robert Tamble said. “It’s the only way emergency response vehicles can get to that area. So, having it blocked by a stationary train, in my mind, is unacceptable.”

According to a log of reports by the Smithville Police Department and Tamble, there have been more than 20 instances of trains being stopped on the railroad crossing since the 4th Avenue Bridge closed. The most recent reported instance was Saturday.

As shown in the log below, the amount of time the trains have been stopped has ranged from 15 minutes to around two hours in one instance that occurred on Dec. 16 at around 4:45 a.m.

Credit: Robert Tamble
A log of reported times where there were reported instances of trains being stopped on the Union Pacific Railroad crossing.

According to a spokesperson for TxDOT, the 4th Avenue Bridge was closed due to damage it received from several flooding events over the past few years.

"The design of the new bridge is about 90% complete. It is expected to go out for bid this spring and construction is expected to take about six months. It is estimated to cost about $1 million and we are using federal bridge funds," Diann Hodges said.

That means the Live Oak Street crossing will remain the only way in or out of the Mount Pleasant subdivision for a while.

Charlie Hoy, a resident of the subdivision, said it causes safety concerns when trains are blocking the crossing.

“The train stops here and blocks this crossing a long time at times," Hoy said. "One of these days, something is going to happen up here."

Hoy said things like getting to the hospital could be in jeopardy when trains are stopped.

“Heart attack, a lady pregnant ... anything gotta get to the hospital and there’s only one way out, right here," Hoy said.

Credit: Robert Tamble.
Cars parked along the road next to a railroad crossing that is allegedly blocked by stopped trains in Smithville on December 19.

In a statement to KVUE, Kristen South, a senior director of corporate communications and media relations for Union Pacific, said:

Union Pacific works to minimize blocked crossings caused by stopped trains. Our goal is to keep trains moving to deliver our customers' goods. We are aware of the work taking place at 4th Avenue and special instructions have been issued, alerting train crews and dispatchers about the change in vehicular traffic.

We do our best to be good neighbors and apologize to those impacted by the blocked crossing. Drivers and pedestrians can report blocked crossings by calling our 24/7 Response Management Communications Center at 888-877-7267. They can also call the phone number posted near railroad crossings.

In an email obtained by KVUE, Ivan Jaime, a senior director of public affairs for Union Pacific, told Tamble that Union Pacific was aware of the situation with the bridge and issued instructions to their train crews to not block the crossing in question unless absolutely necessary. He also said their plan is to not have trains come into town on this line unless they have an immediate route out of town.

"This isn't always feasible," Jaime said in the email. "But we are working hard to make it happen as much as possible."

WATCH: Smithville residents say trains are keeping them trapped in their own neighborhood

According to Jaime's email, Union Pacific operates an average of six trains per day on the rail in question and about 150 trains have gone through the area since Nov. 20 – marking a 90% rate of not blocking the crossing.

"We understand that we need to continue to improve on that, and we certainly apologize for the instances that the crossing has been blocked," Jaime said.

“There’s already a Union Pacific platform where they can do crew changes without having to block the Live Oak crossing," Tamble said. "Something needs to be done."