Electric scooters left on sidewalks downtown have become an issue for those with disabilities. 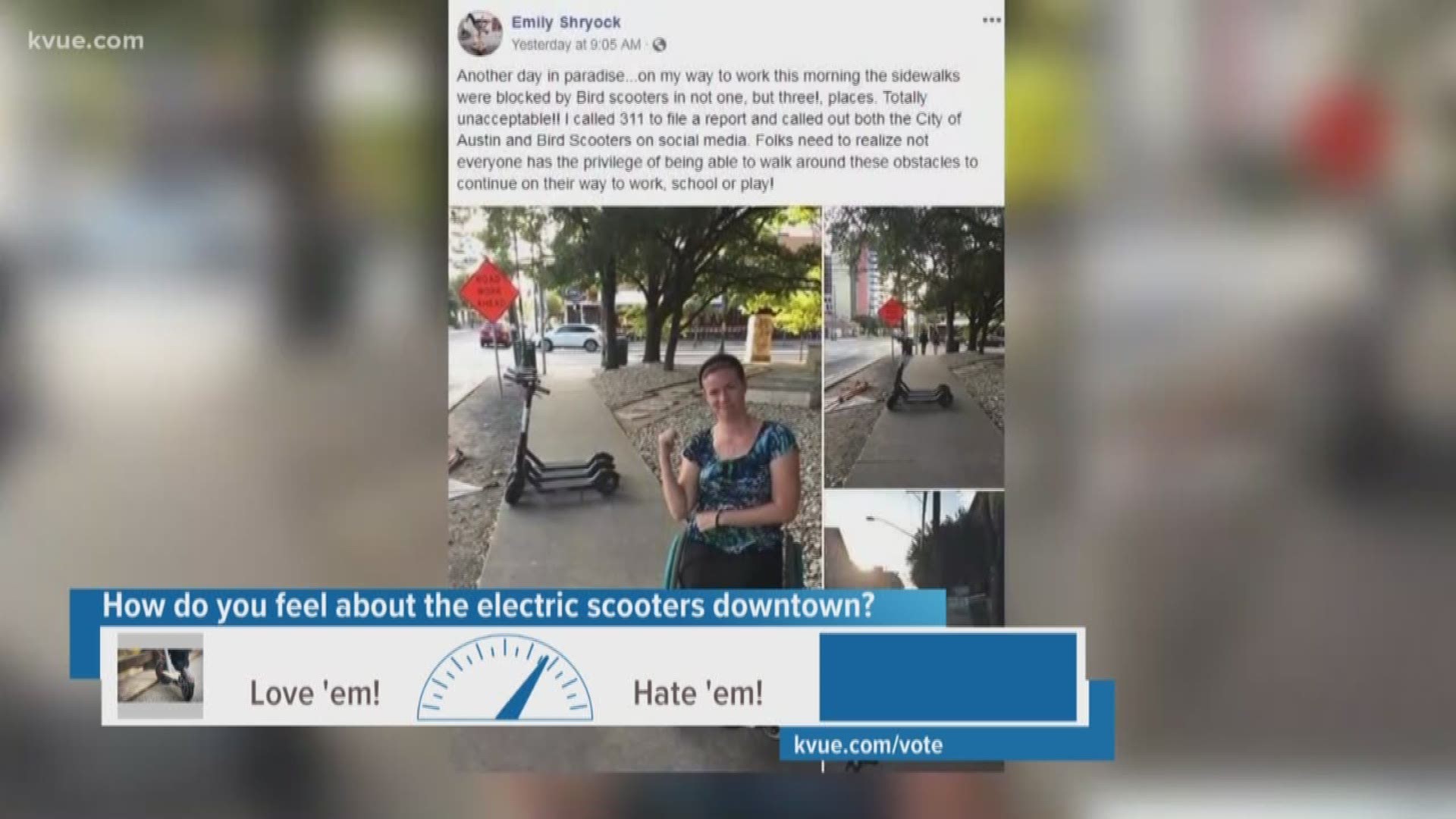 Riding on them is convenient, but once you are done and leave them in the middle of the sidewalk, it is difficult for people who use a wheelchair or are blind to get around them.

Emily Shryock came across scooters blocking her path not only once, but four times in one day while on her way to work through West Campus.

"The first one, I was annoyed,” Shryock. “The second one, I started to get a little angry. The third one, I was like, 'this is ridiculous. And by the fourth one, I was very angry.”

She got around all of them except one.

“Because there was gravel on one side and there was construction on the other side,” said Shryock. “So there really was no way around it. It would have required me to go around the block or backtrack or go across the street. So I flagged somebody down, asked them to take the picture so I could document this so I could show the impact that it was having."

The City said if you see a scooter blocking the right of way, contact 311. The transportation department asks users to be more conscious of where they leave scooters.

"All modes of transportation should yield to the most vulnerable user in any environment that they're in,” said Jason JonMichael, assistant director of Smart Mobility for Austin Transportation.

"If they become bad actors or they're not acting and performing in a way that's best appropriate to maintain safety in Austin, then we have the ability to remove their permit,” said JonMichael.

Shryock said she hopes her outcry at least brings awareness to the issue.

"So many folks saying I've never realized the impact that these scooters can have for people with disabilities,” she said. “That's been incredibly validating to see people have an interest in educating themselves. And by sharing that post, they want to educate others as well."

In a statement the company said:

“We sincerely apologize for the unfortunate and embarrassing misplacement of our vehicles in Austin yesterday. We have been in touch directly with Emily to convey our apologies, and have immediately implemented new processes to correct this going forward.

Bird values the feedback from Austin community members and we are constantly looking for ways to improve and evolve our service. To help combat issues related to the placement and parking of our vehicles, we are deploying a Bird Watchers Program. Individuals involved in this program will work with local communities to ensure that Birds are being parked, ridden and picked up correctly. We are also planning to partner with key local organizations to help us in this effort, including the Austin Transportation Department and ADA.gov in Austin."