The future of a new, and highly controversial bill in Texas, sits on the shoulders of a Federal Judge in San Antonio who will consider whether or not Senate Bill 4 is constitutional. 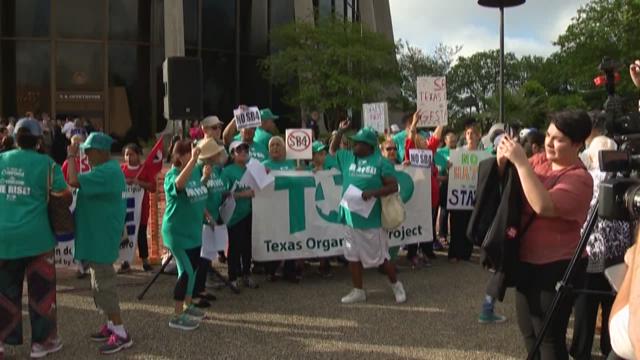 SAN ANTONIO, TEXAS — The future of a controversial bill in Texas now sits on the shoulders of Chief U.S. District Judge Orlando Garcia who will consider whether Senate Bill 4 (SB4) is constitutional.

Garcia held a hearing in San Antonio Monday on the new law.

SB4 requires local law enforcement to comply with Immigrations and Customs Enforcement (ICE) detainers, which are voluntary requests to hold someone in jail while their immigration status is investigated. It also allows local officers to ask a person about their immigration status. It prohibits law enforcement agencies from having policies about immigration and penalizes officers who do so with jail time. And it prohibits elected officials from endorsing policies that contradict SB4 by penalizing them with fines and removal from office.

The law goes into effect on September 1st but a handful of Texas cities, including Austin, counties and organizations are suing the state, saying the law is unconstitutional.

The U.S. Department of Justice sided with Texas in the litigation over SB4 and sent an attorney to help with the case.

Before the hearing started, a crowd of SB4 protestors gathered outside the courthouse. They were joined by numerous state and local leaders as well as the Catholic Archbishop of the San Antonio Diocese.

Immigrants United spoke about the effects of this fight here in Texas. The organization's executive director told KVUE they're mobilizing as many people as they can.

"What they're trying to do is they're trying to push us back into the shadows with SB4 and with scaring our community like that. And we can't let that happen," said Luis Ortega, the executive director. "We have to go out and we have to fight back for our children and for our families."

More than two dozen attorneys were present in the courtroom to represent the 19 plaintiffs and interveners in the case.

Before opening arguments, Judge Garcia agreed to allow the El Paso County Attorney Jo Anne Bernal take the stand to give her testimony.

Bernal stated El Paso County has a strict policy to prohibit local law enforcement from enforcing immigration law. She went on to explain the policy is part of a settlement the county agreed to after it was sued for racial profiling against a group of Hispanic people who were on a bus. Bernal said she is concerned complying with SB4 will violate that contract.

Bernal also discussed the ICE raid that took place in the El Paso County Protective Order Court in February where agents took a woman into custody in the courthouse after she was granted a protective order. Bernal said as a result, fewer women are coming forward to receive protective orders and reports of crime has decreased.

Each lead attorney was given time to argue the problems they see with the law. The attorneys noted congress took sole responsibility for immigration law and enforcement and that it is up to federal agents to carry out the law. They added ICE detainers are intentionally voluntary and the state oversteps its authority with SB4 by making compliance with those requests mandatory.

They also raised concerns about violating the fourth amendment of the U.S. Constitution in regards to holding someone in custody solely on an ICE detainer. Judge Garcia previously ruled it was unconstitutional to hold someone on a detainer with no criminal charge against them.

Being in the United States without proper documentation is a civil offense.

The attorneys expressed concern about the precedent SB4 sets when it comes to police practices .The bill doesn't require officers to ask someone about their immigration status but rather leaves it to the officer's discretion. The attorneys said since SB4 prohibits law enforcement leaders from implementing policies about immigration, officers could essentially do whatever they want with no oversight in regards to immigration.

Another area where attorneys believe SB4 is unconstitutional is the section of the bill that prohibits elected officials from endorsing policies that contradict SB4. The attorneys say this restricts an official's first amendment right to free speech.

The attorneys also said SB4 will cause harm to the state and cities because it will create distrust between immigrant communities and police, lead to public health threats if people fear going to hospitals or clinics for treatment and have a negative economic impact by deterring tourism and conventions with a policy that is perceived as anti-immigrant.

The State attorneys noted SB4 was passed specifically in response to law enforcement officials who made immigration policies for their departments. They went on to say the bill ensures there isn't a patchwork of enforcement policies across the state.

When it comes to the plaintiffs arguments regarding the first amendment rights of elected officials, attorneys for the state said the term "endorse" has to have both meaning and context and that an endorsement would have to cause action in order to be a violation of SB4.

The attorneys for the United States said SB4 doesn't violate federal immigration law and noted if local officers attempted to enforce immigration law they would be violating federal law.

They also noted it is appropriate and legal to hold someone on a detainer because a detainer includes information about an immigrants unlawful presence in the U.S.

After the opening arguments, the plantiffs called additional witnesses. The first was State Representative Ana Hernandez (D-Houston) who recalled the process in the legislature of passing SB4.

The next witness was a Professor of Political Science and reseracher from the University of California San Diego who testified about the negative public health and safety impacts of SB4.

Bexar County Judge Nelson Wolff was the next witness who discussed the financial impact of SB4. Wolff said over the past 11 years the county has spent $22-23M holding people in jail on ICE detainers.

Wolff told the court he believes SB4 will have negative impacts on the immigrant community, their health, safety and relations with police, saying "if I were undocumented I'd stay away from anything that had to do with government".

He also lightened the tense mood in the courtroom during his cross examination. When the State's attorney asked how should he address him, Wolff joked "I don't know. You may have to address me as 'former public official' soon," referring to the penalty of being removed from office for endorsing a policy contrary to SB4.

The final witness was San Antonio City Council Member Rey Saldana who told the court he is most concerned about the restrictions SB4 has on his speech. He also noted that local agencies have been talking to companies that are considering cancelling conventions in the city as a result of SB4.

The state didn't call any witnesses.

Judge Garcia commended both sides on their work in the case, saying they gave him a lot to think about.

"I am grateful to both sides for excellent lawyers, excellent briefs," he said.

Garcia said he would issue an order and allow the attorneys to submit additional hearing briefs. He noted that he will be hearing the State's redistricting case for six days, and therefore isn't sure of a timeline for when he will render a decision on the constitutionality of SB4.

In the meantime, Immigrants United is putting together workshops to educate people about their rights, putting them in touch with immigration lawyers, and teaching them how to manage their money if a family member were to be detained.