On Nov. 12, KVUE was invited to participate in a few of the training scenarios cadets and officers undergo as part of an effort by the Round Rock Police Department. 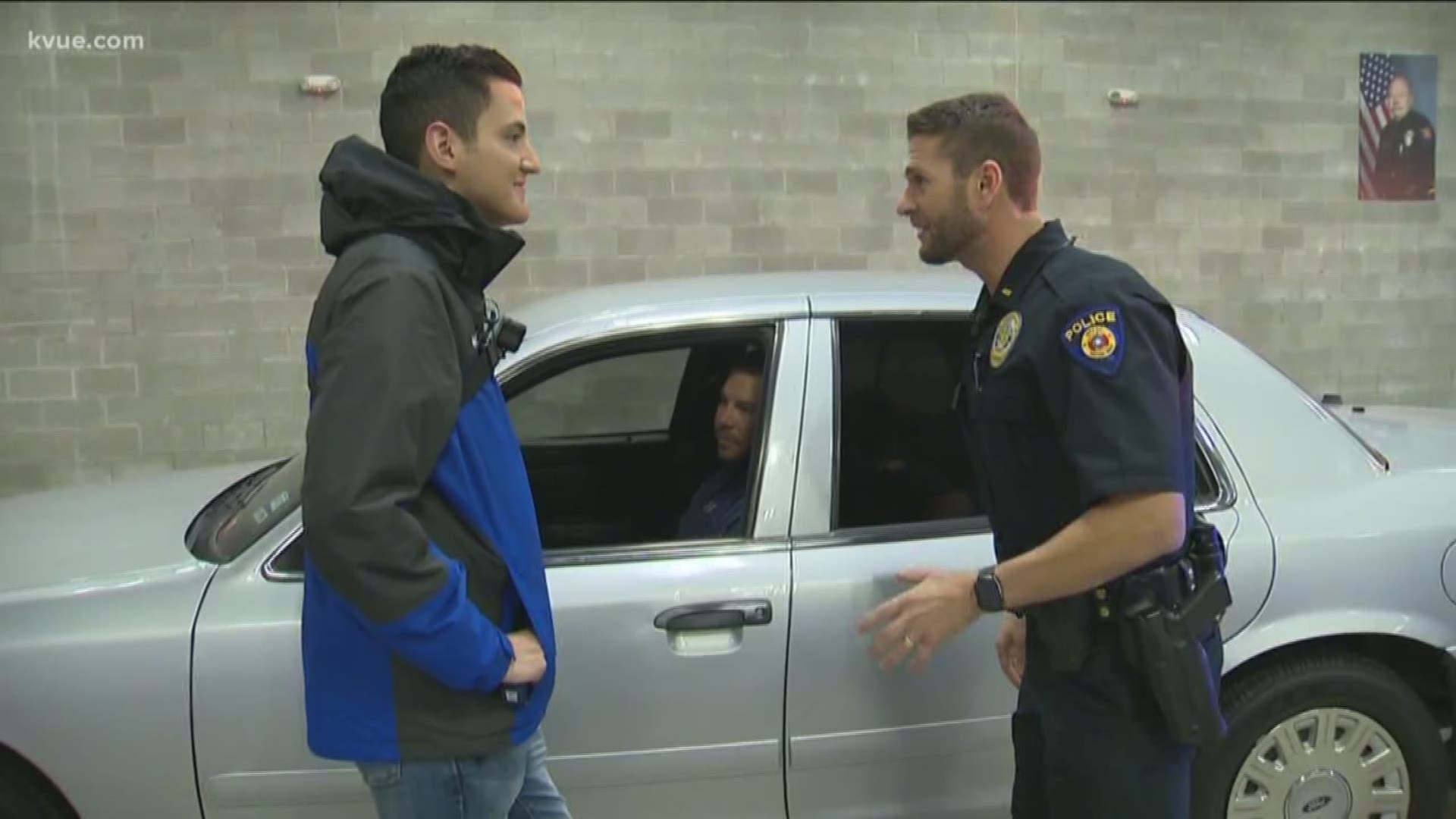 ROUND ROCK, Texas — Making split-second decisions is something police officers around the country do every day – under our watchful eyes – as they protect themselves and the public. And we've seen what can happen when they make a deadly mistake.

Round Rock Police Chief Allen Banks believes making sure officers have the critical-thinking skills they need when making split-second decisions is important.

"The decisions that an officer makes in a split second can change a life. It can change your life or somebody else's. That's why we continuously train on the tactics and the objectives that we do each and every day," Banks said.

On Nov. 12, KVUE was invited to participate in a few of the training scenarios cadets and officers undergo as part of an effort by the Round Rock Police Dept. to promote its Citizens Police Academy.

The scenarios took place at the Round Rock Public Safety Training Center, next-door to the police department's headquarters.

I was nervous, I'll admit, because I wasn't sure what to expect. Neither of the two training officers would share any information about the first scenario because they wanted me to have a raw experience.

Our first scenario took place inside one of the houses built at the training center. Its walls can move around, which means each run-through can look entirely different to the trainees.

Before we entered, Det. Brain Nevue and Lt. Jimmy Keyes demonstrated how to use the simulation weapon. It's nearly identical to the pistol most officers carry. This one shoots paint projectiles.

After a series of questions to get my mind off of what may come next, we went in.

Once inside, I made my way in through several rooms, unsure of what may lie around the corner.

"Let's go! Got to keep moving. Alright, very good, good recognition, keep moving, keep moving," Lt. Keyes said as I tried to make sense of what was going on.

Then, I came across what I'm supposed to perceive as a threat, a picture of a man holding a gun and pointing it at me in one of the rooms. I wasn't exactly sure what to do at that moment. My natural instinct wasn't to shoot.

I hesitated for several seconds. I thought, "Sure, I have a 'gun' on me, and this guy's pointing a gun at me. Does this mean I should shoot first?"

Let's be real. If this was a real-life situation, I'm sure I could have been shot in those few seconds of hesitation. Good thing it's just a training.

Eventually, I pulled the trigger, a decision that wasn't easy for me to make. The scenario ended about a minute or so later.

Prior to this scenario, I had never held a gun until a different story I covered in 2018.

"When you come around the corner, when you come into an unknown, you have to make quick, critical decision-making in an instance when you don't know what you're going to be presented with for public safety, for your safety," Lt. Keyes said.

"You didn't panic, so that's great. Because that's what we're looking for, and your mind was working. You started asking those good questions. 'What do I do? How do I address this?'" Lt. Keyes said.

Next we moved into the gym, where two patrol cars were waiting for us. One belonged to the "patrol officer" (a.k.a. me) and the other to the "driver."

Lt. Tom Sloan quickly reminded me there's no such thing as a routine traffic stop. Sometimes, the drivers they pull over are apologetic, but others can quickly escalate the situation.

I sat in the driver's seat of the patrol car. I just pulled someone over for speeding. And like in real life, I don't know who or what I'm going to find.

"This is Officer Perez with the Round Rock Police Department. I stopped you because you're speeding. Can I see your driver's license and insurance?" I told the driver, who was being played by Ofc. Aaron Moeller.

In this scenario, he played a father, rushing to get his kid.

But in another part of the scenario, his character fought back.

"I ran the stop sign. That's what you're saying? I didn't, man," the driver said.

"I saw you do it. Just hand over your driver's license and your insurance," I persisted.

"It's right here," the driver said, as he pointed at gun at me.

I knew the gun was near the center console from a previous part of this scenario, but I completely forgot it was there during this part because I was too pre-occupied with what I was going to say to the combative driver.

"He got the drop on you, and we don't want to ever have the drop on us, right?" Lt. Sloan said. "Once he reaches for it, you want to give clear instructions – just a lot of decisions that you've got to make."

Round Rock police officers undergo 23 weeks of training at the academy and receive more training after graduation to help them make these decisions.

An officer's main goal during each of the scenarios I walked through, he said, is to de-escalate the situation.

"Sometimes, we don't have that option. It's dictated by the offender or the subject at that time, and we have to act accordingly or appropriately," he said.

These demonstrations are just an example of the training officers undergo to make sure they don't make a costly mistake.

"This is a job that you can leave the house in the morning and may never return," Chief Banks said.

The scenarios KVUE went through are part of the Round Rock Police Department's Citizens Police Academy. Its most recent class graduated Nov. 20. The next program begins in the spring of 2020. You can learn more about it on the city's website.

Navy cancels review for SEALs after firing of Navy secretary