A protest on Saturday night called on the Austin City Council to defund APD. Meanwhile in Downtown Austin, several protesters showed up armed. 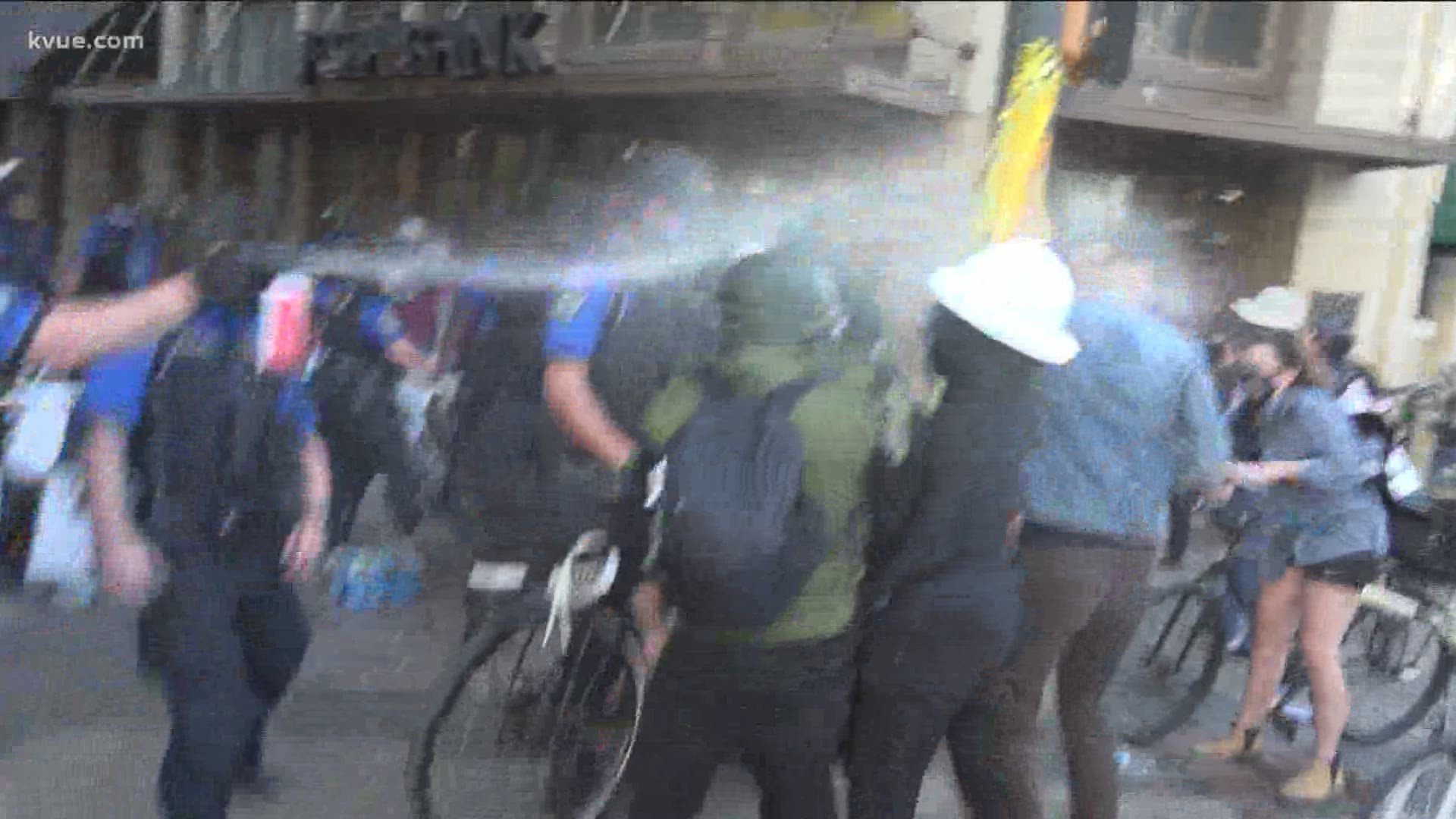 AUSTIN, Texas — Extra law enforcement was brought into Austin this weekend as protests on Saturday night followed the death of Garrett Foster, shot dead at a Black Lives Matter rally on July 25.

The Texas Department of Public Safety said it received reports of people planning to disrupt peaceful protests. While it supports people's right to lawfully protests, to prevent any violence, DPS troopers are teaming up with the Austin Police Department to increase their presence this weekend.

The law enforcement agencies are also working with the National Guard.

On Saturday night, several armed protesters were spotted outside a memorial to Foster in Downtown Austin. They told KVUE they showed up to protect people and hope to see a peaceful protest.

Pepper spray was used to detain a group near Fourth Street and Congress Avenue who were blocking the sidewalk with their sign. Those protesters told KVUE the response by police was not justified and said pedestrians were able to walk around the signs if needed.

At one point, police blocked Congress Avenue. Some protesters later returned, chanting, "one solution, revolution!" APD did not interfere as the marchers walked across the crosswalk.

The roadway is reopening as law enforcement blocks off the sidewalks so people don’t walk in the middle of the street. @KVUE pic.twitter.com/s1khlM2Y3b

By around 10:15 p.m. Fourth Street and Congress Avenue reopened to traffic as demonstrators marched elsewhere. Bicycle police were seen joining a Travis County Sheriff's Office bus that had APD and DPS officers on it.

By around 11:15 p.m., protesters were blocking the Interstate 35 access road (not the highway) outside the Austin Police Department headquarters. Officers warned demonstrators to get out of the street or be subject to arrest for violating state law. Mounted patrols responded to the situation, limiting protesters to the parking lot under 35 and the sidewalks.

Mounted patrol is moving in as police tell protesters to get out of the street pic.twitter.com/uRYw5CnXpl

Meanwhile, a "March to Amplify Black Voices and Defund the Police" also went ahead on Saturday night, starting on the University of Texas campus.

Protesters marched through central Austin on Saturday, chanting, "APD has got to go," calling on the Austin City Council to slash funding for the Austin Police Department in its upcoming budget.

Protesters now on the move through central #Austin. They plan on going to #ATXCouncil member @kathietovo’s house to keep protesting because they don’t believe she’s asked for enough cuts to the @Austin_Police budget. pic.twitter.com/trIaWUTv76

The group took their message to Austin Councilmember Kathie Tovo's house after leaving the UT campus area. They don't believe Tovo has asked for enough cuts to the Austin Police Department's budget.

NOW: Protesters are gathered in Central Austin after marching to a city council member’s home. Here’s a live look from Bryce Newberry.

Protesters also called for the arrest of Daniel Perry, whose attorney on Friday identified him as the person who shot and killed Foster. Perry claims he was acting in self-defense and no charges have been filed in relation to the shooting.

6 more arrested over crimes committed during Capitol protests in May

Police helicopters were monitoring the situation on Saturday night.

On Friday, DPS announced that six more people had been arrested in relation to crimes committed during protests at the Texas State Capitol on May 30 and 31. The arrests range from felony criminal mischief to riot and follow several other arrests earlier this month related to incidents at the protests.

As for Saturday night's protests, 35 people were reportedly arrested. 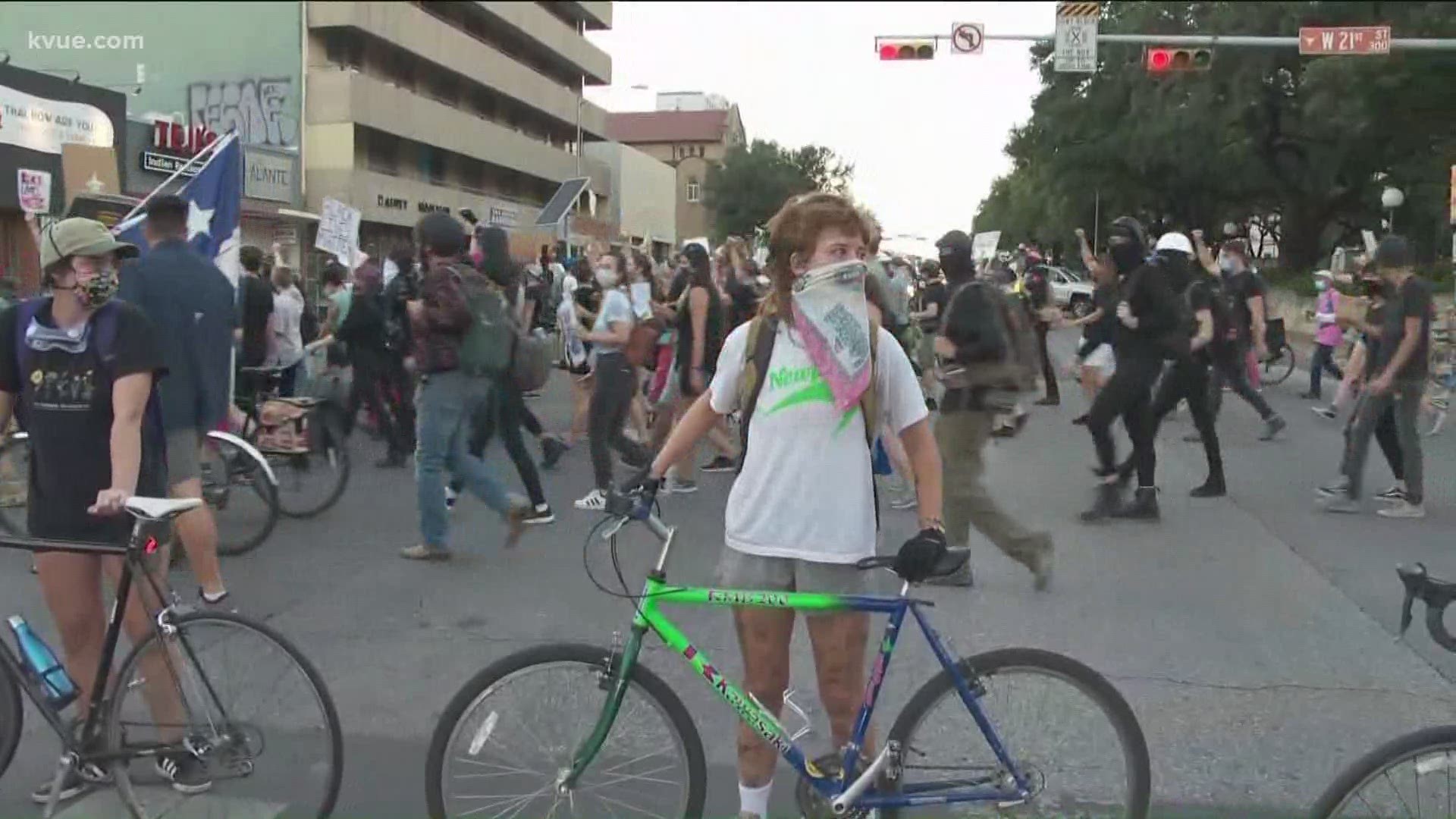