The idea of a Leslie Cochran statue downtown has Austinites talking. 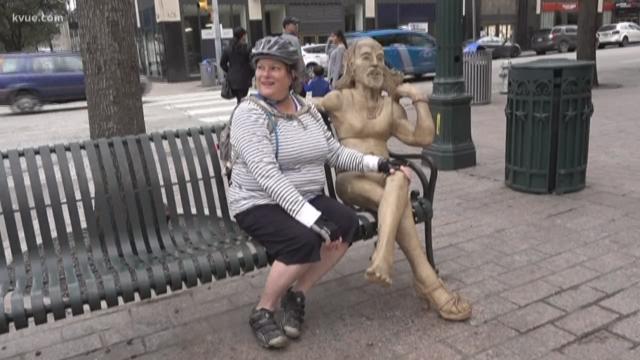 There are a lot of ways to describe Leslie Cochran: unconventional, offbeat, quirky.

But there's one word that almost everybody would use to describe the late, downtown fixture -- Austin.

Now, a local filmmaker is trying to literally solidify his image.

"He was ahead of his time in many ways," explained Spencer Nutting, who has worked for years on a film covering Cochran's impact on Austin.

Nutting's encounter came during the 2000 presidential election, when he worked with Cochran to hand out T-shirts poking fun at allegedly stolen Bush debate preps.

"(Cochran) came chasing after me and said, 'Spencer, Spencer, I need more of those shirts. We're all out,'" Nutting recalled.

Nutting wants his film to also serve as a memorial for Cochran, and plans to incorporate the statue into his piece.

"I was looking for something to unite these stories together, and I had an epiphany," said Nutting.

That's when he reached out to local sculptor Bob Coffee to create a life-size model of the statue.

This past weekend, they took it downtown to have it fitted on a bench, where passersby were quick to take a seat.

While Cochran is undoubtedly well known by locals, there has been pushback over whether others are more deserving of a statue.

"Then let (those who feel that way) do it. If they feel that there's somebody else more important, I'm not disputing that. If they want to make a statue, be my guest. But I'll let you know, it's a lot of work," said Nutting, who added he's spent two years working with local commissions to get the statue approved.

If it is funded, it will sit on Sixth and Congress. He is currently trying to raise money to complete the project.

"This is not going to be a donation from Spencer Nutting to the city of Austin. This is going to be a gift to the people. Symbolically, it needs to come from the people," said Nutting.

There is already a marker commemorating Cochran, but Nutting believes this will get more attention.

"Don't tell me there won't be a line all the way Seventh Street to Sixth Street in all directions to get to that bench and have their picture taken," Nutting said.

His goal for the project is simple:

"Let's put Leslie back on the street."