Positivity rate: Breaking down the metric Gov. Abbott is using to reopen Texas 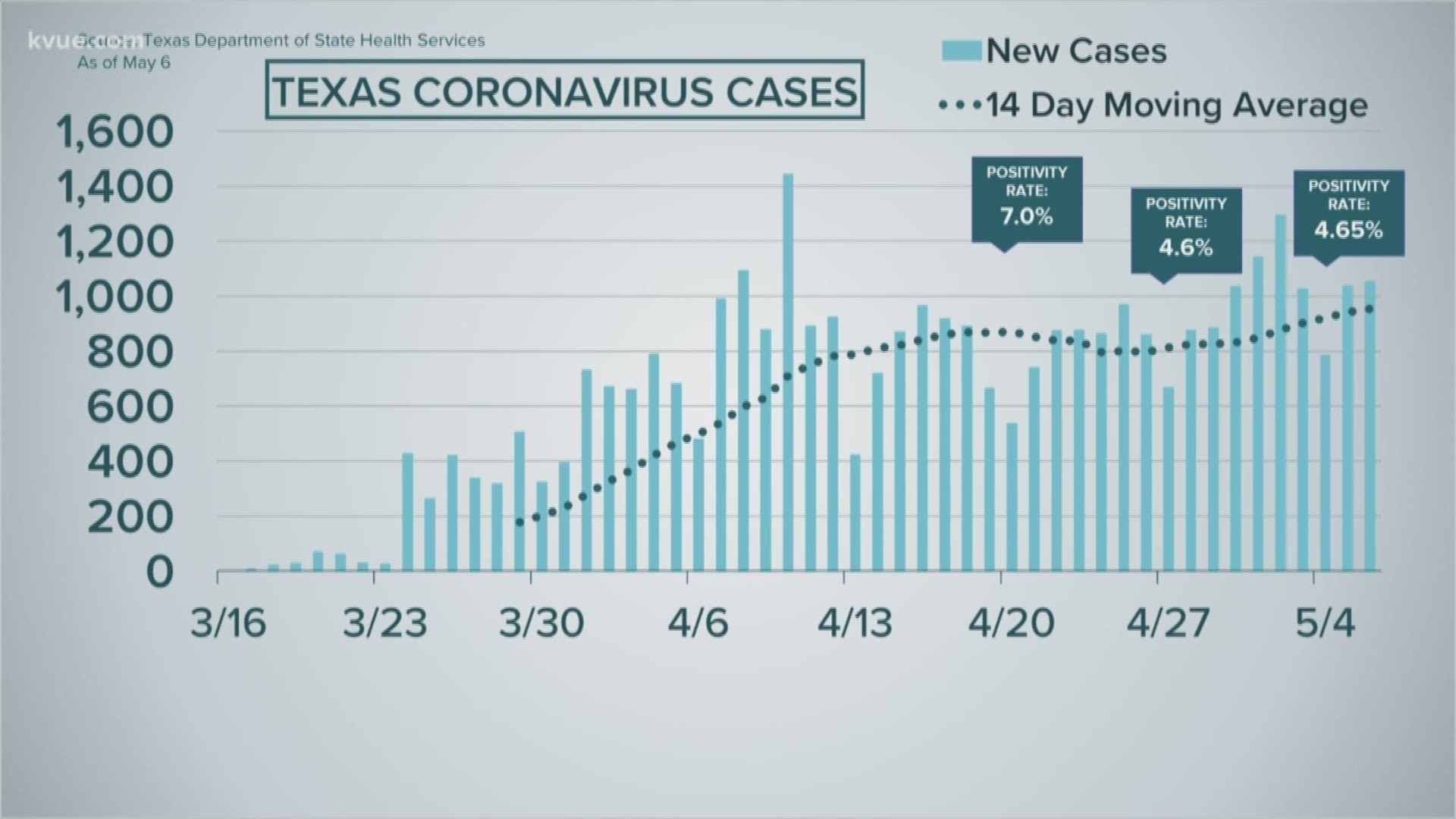 AUSTIN, Texas — In less than 48 hours, Texas hair salons, barbershops, and nail and tanning salons will be allowed to reopen to customers at the order of Gov. Greg Abbott.

During a news conference Tuesday, Gov. Abbott said the decision to expand the scope of reopened businesses is based on data, especially the positivity rate.

The positivity rate is the daily percentage of people testing positive for COVID-19 in relation to the total number of people tested that day.

Still, a lot of Texans are concerned because the number of COVID-19 cases and deaths continues to rise in the state. In fact, just this past weekend, Texas set a new record for the largest increase in cases since the pandemic began.

The KVUE News team plotted out data from the Texas Department of State Health Services (DSHS) to map out the number of reported cases in Texas each day since the pandemic began.

Just before mid-April, the number of cases spiked then dropped off, and case numbers spiked again at the beginning of May. The dotted line shows the 14-day moving average, and, as of late, cases are increasing.

But Gov. Abbott said that's because the number of people being tested in the state is increasing, so these case numbers need context which he assesses using the positivity rate.

According to DSHS, the percentage of people who tested positive for COVID-19 out of the total number of people tested on April 20 was about 7%. On the day Gov. Abbott announced his plan start reopening businesses, April 27, the rate had dropped to about 4.6%. On May 4, it was 4.65%.

"Despite concentrating on areas where we think there may be a high level or number of people who could test positive, the fact remains that more than 95% of the people who were tested test negative," Abbott said.

Abbott added a "red flag" would be a positivity rate of 10%.

"If you were to go back earlier in the April timeframe, you would have seen that the positivity test rate was closer to 10%. In fact, sometimes over 10%," Abbott said. "If the positivity test rate is more than 10%, that's one of those red flags that we begin to look at, not if it's just a one-off day of testing more than 10% positive, but if there are multiple days that a trend line begins."

The positivity rate and/or the data used to calculate it is not something you can see on the state's COVID-19 dashboard yet, but KVUE News requested the data from DSHS and staff provided us with data from April 16 until May 6.

The rate fluctuated and reached 10% or higher several times, most recently as Sunday. But adding in the seven-day average shows overall the positivity rate is decreasing.