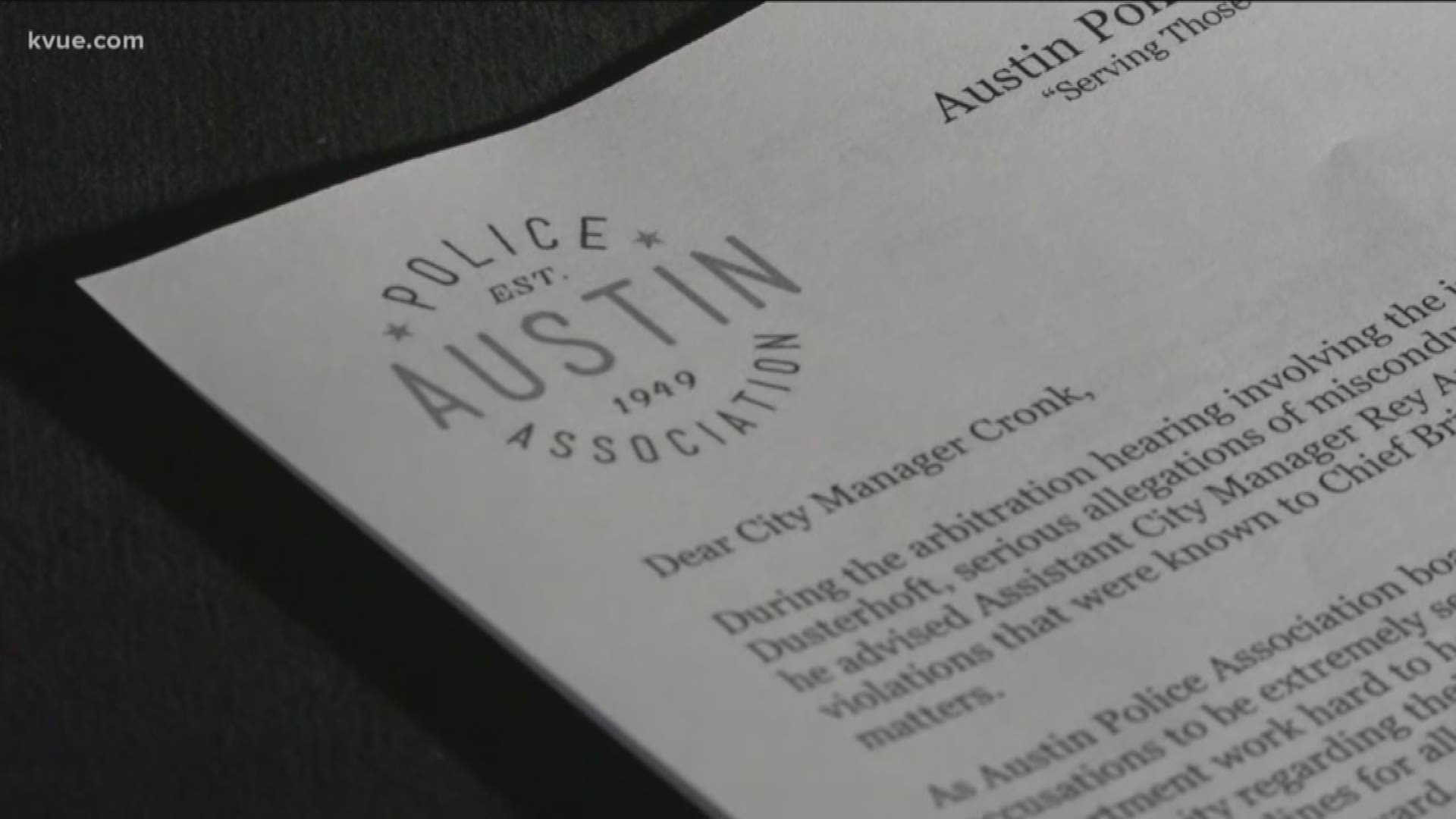 The Austin Police Association said the accusations were “extremely serious and disturbing.”

“The misconduct, alleged by Commander Dusterhoft, should have been investigated by the department to determine the validity of the accusations,” Austin Police Association members said in a letter to City Manager Spencer Cronk on Tuesday. “As the head of the organization, Chief Manley had the duty and obligation to ensure the allegations were thoroughly investigated and proper actions taken where necessary.”

The accusations come after Dusterhoft was fired in December 2018 for allegedly assaulting a woman during sex and associating with people who bring discredit to the department.

RELATED: Travis Co. District Attorney's Office will not be prosecuting a case against Jason Dusterhoft

Dusterhoft is appealing the termination and challenging the accusations put forth in an APD memo last year. The APD memo said Dusterhoft had attempted to cover up his actions by deleting photos, videos, apps and text messages on his phone.

Arbitration for the appeal has concluded and the hearing examiner is reviewing the case.

During the arbitration hearing, serious allegations of misconduct were reported, the Austin Police Association said.

“Jason testified he advised Assistant City Manager Rey Arellano of several alleged criminal and policy violations that were known to Chief Brian Manley and proper action was not taken in those matters,” the police association said. “A set of double standards for those with higher rank or employees favored by the chief or his executive staff is detrimental to the morale and professionalism of the department.”

Some of those allegations, according to Austin Police Association President Ken Casaday, included alleged timesheet abuse and abuse of officers by high-ranking officials.

"There were 11 allegations brought up by Commander Dusterhoft in his arbitration in this past week, some of them were policy violations, some of them have the possibility of criminality tied to them," Casaday said. "What we're asking for is for Ray Arellano and the chief to be investigated on why they didn't take action on these complaints."

According to the police association, Dusterhoft expressed a concern of retaliation if he brought forward accusations of misconduct from his chain of command.

"The officers work hard every day to maintain the trust of the community and its hard to when the chief or the city manager are selecting who they investigate and who they don't," Casaday said. “We expect all of our officers in the department no matter their rank, to be investigated in a fair manner and not just by the lowest rank."

Cronk responded to the letter on Tuesday, saying, “I will review the matter raised in the Austin Police Association letter I received this afternoon. The APA suggests that former police officer Jason Dusterhoft advised Chief Brian Manley and Assistant City Manager Rey Arellano about wrongdoing within the department that was not appropriately addressed by them. I take all allegations seriously, and will look into this particular accusation.”

Nats fan who caught a home run ball while holding two beers is now at Game 6, thanks to Bud Light