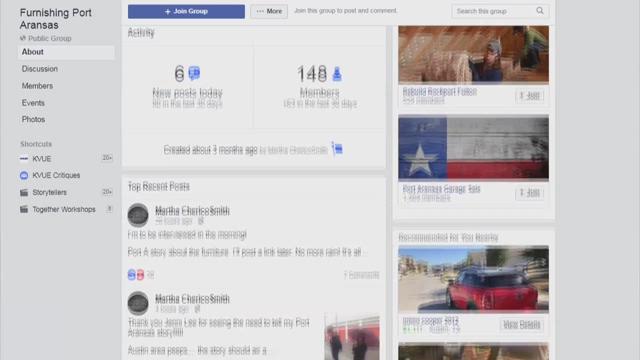 What started out as a side business for Pflugerville teacher, Martha Smith, quickly became a mission of love.

Whether it's outside her North Austin home or outside a North Austin storage unit, she paints and sands down furniture. Many times, Smith highlights imperfections, making them a part of the furniture. Pieces she repurposes for a greater one.

"I put them on my Facebook 'Furnishing Port Aransas' site," said Smith.

She takes donated chairs, tables and dressers or buys them as cheaply as she can. She touches them up. Sometimes she stencil paints. Originally, this was supposed to be a side business.

Until she visited Port Aransas.

"It was devastating," Smith said through tears.

The Pflugerville teacher at Harmony Science Academy of Pflugerville was shocked by what Hurricane Harvey left behind.

"But was more surprised from what I heard cause the people were like, 'Oh my gosh I need a dresser,'" Smith said.

That's when the 56-year-old knew what she had to do.

"One man was so thrilled to get a chair," she said.

Since October, Smith has been buying, painting and donating furniture to those affected by Hurricane Harvey in Port Aransas.

"You drive through that town -- it's a ghost town. There are shelled out buildings and houses. If somebody was lucky enough to retain the structure of their home, they're just now trying to get walls and floors," said Smith.

Residents such as Pearl Silva, who is still rebuilding her home.

"We lost refrigerators, furniture, clothes, just pretty much everything," Silva said over the phone.

Silva ended up with one of Smith's dressers.

"It was awesome to be able to put some stuff away and actually open up a draw and say, 'Okay, I've got my socks here. Don't have to look through all the totes and bags,'" said Silva.

Some of Smith's furniture contains messages. KVUE saw some moss green chairs with the words "cherish" and "memories" stenciled on them. Others had "happiness" and "forever" painted on.

"They've been through a lot," Smith explained.

A short drive a few minutes north, Smith took KVUE'S Jenni Lee to a storage unit and displayed even more furniture. Some finished. Most not.

Come Saturday, the seventh delivery of donations will make its way to Port A. Giving not only furniture, but a little piece of hope from a good hearted Pflugerville teacher.

But Smith may have to slow down on her furniture donations soon. Supplies, storage and trailer rentals all add up, and on her teacher salary, Smith said she can't afford to keep going at her current pace.