A noose was found on top of a campaign sign a Leander couple put outside their home to support Democrat Christine Mann, who's running for Texas' 31st congressional district 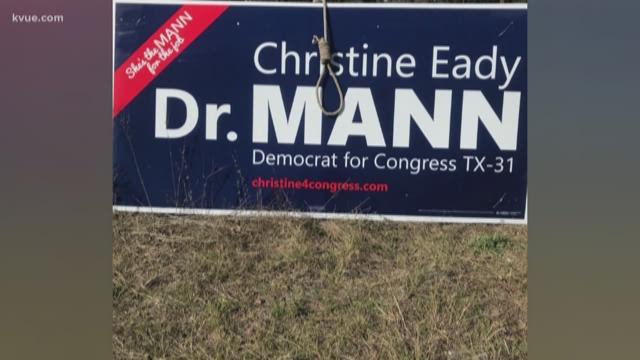 The Williamson County Sheriff's Office is investigating to find out who is responsible for putting a noose over a campaign sign in Leander.

The sign supports Christine Mann, a family practice doctor who is a Democrat running for Texas' 31st congressional district.

Jena Recer supports Dr. Mann and has the sign on her property.

When KVUE spoke with her, she showed the traces left on the side of her home after it was egged a few weeks ago.

She said she thinks it is because “we're a lesbian couple in Leander.” Recer lives with her wife, Karen.

She said sometimes people yell at them while driving by their home.

But yesterday morning she noticed a noose hanging on her campaign sign.

"There's something about seeing a noose that puts a chill down your spine,” said Recer. "At first I was little scared, and then I was just angry. It really bothers me that someone's coming and trying to frighten me away from my First Amendment rights.”

Recer said, "I think anytime there's a noose, you're really talking about a hate crime given the history of nooses in the state of Texas.”

KVUE also spoke with Dr. Christine Mann, who launched her campaign last May.

"There are still people who think that kind of action is appropriate,” said Mann. “That threats of violence still exist against people in this country, especially marginalized people."

Dr. Mann said this has fueled the fire for her campaign.

They have received support across the country.

Including one of her contenders, MJ Hegar saying on Twitter:

"While my stomach is roiling at the act, I do hope it will serve to energize my colleague and every single person in Texas and this great nation to do more to stop it."

Recer said she will continue supporting Dr. Mann in spite of the circumstances.

"I know it was a coward,” she said. “It had to be. Nothing's really going to happen. They did for just a moment get me afraid, but they're not going to win.”

The Williamson County Sheriff's Office said they have taken a report of the incident and the case has been forwarded to their criminal investigation unit.