Dihydroanatoxin was found in algae samples collected on June 11 from Lady Bird Lake and Lake Austin. The City of Austin recommends dogs not drink or touch the water. 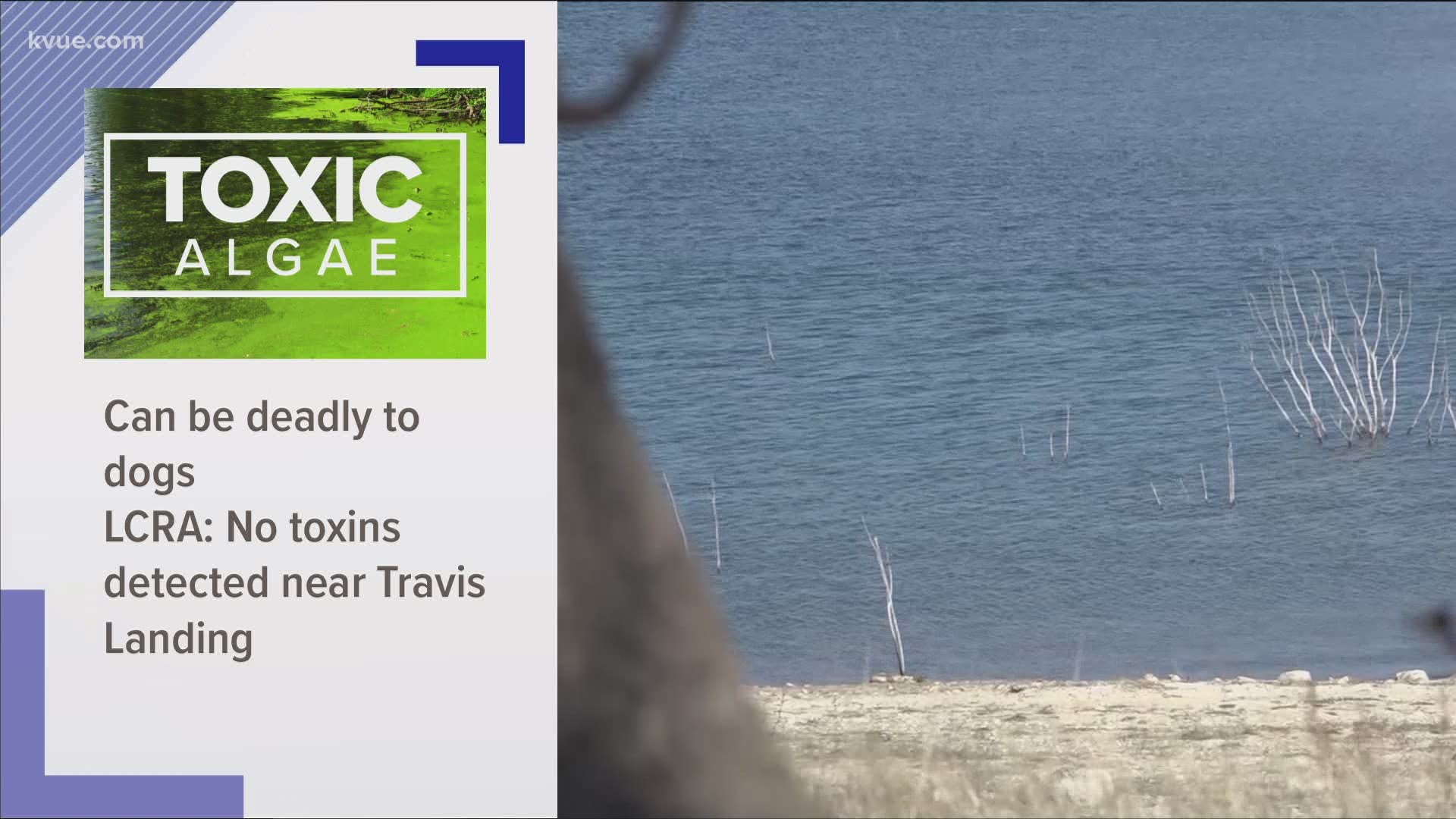 AUSTIN, Texas — Editor's note: The Watershed Department on June 25 issued a correction to their report stating that toxins were not found at a low water crossing at Mansfield Dam. For more updates, click here.

Toxic blue-green algae continue to affect waterways across the Austin area, according to the most recent algae update from the City of Austin on July 2.

Officials said they detected low levels of dihydroanatoxin in algae samples collected on June 24 from Red Bud Isle. In other locations on Lady Bird Lake and Lake Austin, officials did not find any algae or there were no toxins in samples from June 24.

"Tests on samples collected June 22 from Lake Travis did not detect any toxicity in bluegreen algae near Travis Landing," the LCRA added. "LCRA cautions that the lack of toxicity at the test site is not an ;all-clear; sign, and recommends people continue to avoid contact with algae and keep their dogs from ingesting or playing in algae in the Highland Lakes"

Dihydroanatoxin was found in algae samples collected on June 11 from Red Bud Isle on Lady Bird Lake and the Walsh Boat Ramp. The toxin was also identified in algae samples from other Highland Lakes this year by the Lower Colorado River Authority (LCRA).

Officials are recommending dog owners do not allow their dogs to ingest or touch algae in any area lakes, creeks or bodies of water. People should also avoid the algae.

Based on bacteria levels, Lady Bird Lake still meets the State of Texas’s standards for recreational use. However, people are not allowed to swim in Lady Bird Lake at any time.

No toxins were present in an algae sample taken from a low-water crossing near Mansfield Dam on June 3, Watershed Protection said.

On June 1, Watershed Protection said it had found no further evidence of toxic blue-green algae in Lady Bird Lake and Lake Austin, after samples in March revealed low levels of dihydroanatoxin.

On June 7, the department found "quite a bit" of floating algae near Mansfield Dam on Lake Austin, but it didn't find any algae on Lady Bird Lake or at other locations on Lake Austin.

Officials told KVUE May's rainfall may have helped to wash away the algae, but rains could also increase bacteria levels and cause a resurgence with drier weather.

We kicked off our monitoring program for harmful algae this week and found quite a bit of floating algae near Mansfield Dam on Lake Austin. We did not find any algae on Lady Bird Lake or at other locations on Lake Austin. (1/3) pic.twitter.com/KrZinKyUuO

Meanwhile, the Lower Colorado River Authority (LCRA) said testing on blue-green algae collected from Lake Travis on May 25 showed the algae continues to contain toxic levels dangerous to humans and pets if ingested.

“These samples were collected before the recent rains, and we are eager to see what the net effect of the rainy weather will be on the algae,” said John Hofmann, LCRA executive vice president for Water. “While the rains and higher lake levels could dislodge some of the algae, the rain will also wash additional nutrients into the water, which could spur new algae growth.”

Watershed Protection will be checking for the presence of algae every couple of weeks during the summer. It will also be monitoring Lake Walter E. Long, visiting at least three times during the summer and fall. The department is still urging people to keep kids and pets out of any water that looks green or dirty.

The City said if owners allow their dogs in the water, it is at their own risk. The City recommends rinsing dogs after contact with water bodies to help prevent them from licking algae off their fur.

Owners should take their dogs to a veterinarian immediately if they become sick after swimming in Lady Bird Lake. The City also asks owners to report the illness to Austin 311.

Dihydroanatoxin is the same toxin the Lower Colorado River Authority (LCRA) detected in other Highland Lakes earlier this year and is the same toxin found in 2019 and 2020 in Lady Bird Lake. The City said although the levels of the toxin are low, they indicate an increased risk for dogs in the lakes.

The source of the toxin is cyanobacteria or blue-green algae. The algae, which can be found in Central Texas waterways throughout the year, are more prevalent in warmer, more stagnant water and are more likely to produce toxins under those conditions.

The City of Austin said it is planning a pilot program to try to prevent the growth of algae using phosphorus-binding clay Phoslock, pending council approval.

The project would consist of applying Phoslock by boat over 20 acres of water around Red Bud Isle, the City said. There would be three applications over the course of nine weeks, starting June 21. For 2021, the cost is $300,000 and includes the material, the application and laboratory testing.

Phoslock helps prevent the blue-green algae from using phosphorus as a nutrient source and is safe for humans, wildlife and the environment.