A North Austin Community reached out to the KVUE Defenders claiming their calls to USPS reporting theft remained unanswered. 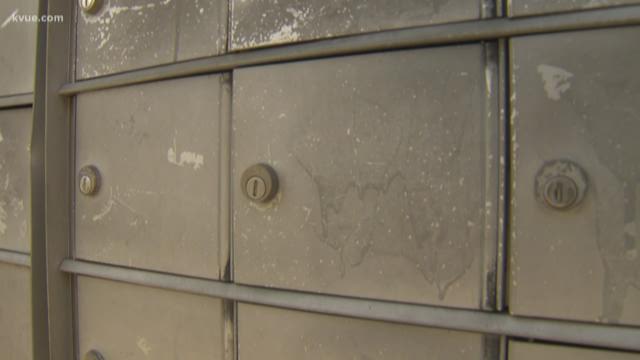 They complain of missed and overdue bills, theft and tons of frustration.

A North Austin community says the United States Post Office is causing a first-class mess by neglecting to take care of faulty mailboxes in a timely manner. And once the KVUE Defenders started asking questions, the post office made some changes -- but refused to meet with KVUE about the neighbors’ complaints.

It's an ever-present insecurity about the insecure nature of the mailboxes.

“We started having problems a little over two years ago,” said Copperfield resident Anita Alexander.

The neighborhood website is full of warnings and complaints about open boxes, break-ins and missing mail, echoing the concerns of those KVUE Defender Mike Rush spoke with.

One resident, who asked not to be identified, said someone stole her mail the very day Rush visited:

Neighbor: So, this is my actual mailbox. And this is where I consistently have been receiving mail.

Rush: And this has the broken door?

Rush: Your mailbox doesn't have a broken door.

In some boxes, the doors are fine, but the locks don't seem to work. One we found unlocked had mail in it.

We found another one that didn't have a lock at all. And neighbors told Rush there is no way the post office is not aware of these problems.

Some said they’ve gone to the post office to complain and they called as well. Others describe their complaints as "numerous."

Alexander is perhaps the queen of the clusterbox complaints:

Rush: If you had to add up how many times you've contacted them since you first started?

The retired educator started a couple of years ago after she said someone pried open her box, stole a credit card and used it.

As for all those complaints, neighbors said no results, just a collage of discontent.

They want their boxes, some dating back to the 80s and 90s, replaced with new, sturdier boxes like some in other parts of the community.

But the post office, in a statement, told Rush that officials recently assessed these boxes and others in Copperfield and found them to be "serviceable," so "no box replacements are planned at this time."

Rush requested to interview the postmaster, Thomas Billington, but was denied. A spokesman stated nobody authorized was available.

But after Rush reached out, there were some results, like a replaced lock, open doors secured, and stickers advertising a number to call for help, and then there's this:

“By you contacting the post office, they actually fixed it this morning,” said neighbor Karen Boes.

She’s talking about the outgoing mailbox in her clusterbox that she said was broken and reported more than a year ago.

“I didn't know that I had to contact a TV station to get something like that done,” she said.

A post office spokesman wrote Rush in an email that the organization is working to improve communication as well as response time for repairs.

If you have a problem for the KVUE Defenders to investigate, send us an email at defenders@kvue.com or give us a call at 512-533-2231.