Music therapy has the power to help and heal people in all walks of life. Sometimes it is needed to give someone a boost mentally, physically or emotionally. For one young man living in Austin, music has helped him learn to communicate and find his voice like never before. 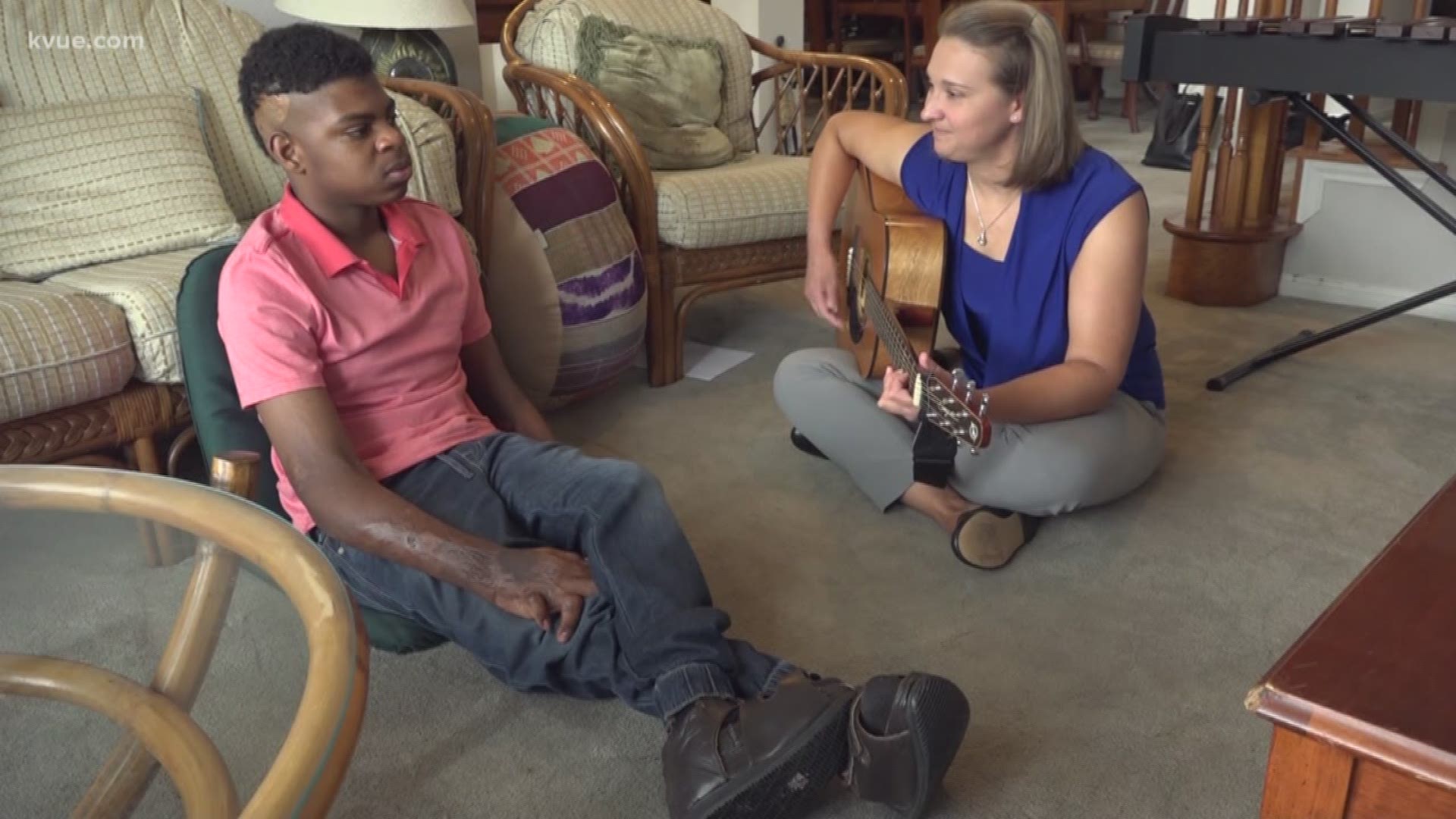 AUSTIN — Music therapy has the power to help and heal people in all walks of life. Sometimes it is needed to give someone a boost mentally, physically or emotionally. For one young man living in Austin, music has helped him learn to communicate and find his voice like never before.

Nicole Bowen has lived in Austin for more than 25 years now. She realized after living in Central Texas for a while, she wanted to add someone to her family.

"I wanted a child, but I wasn't married," Bowen said. "And there are a lot of kids that need homes."

Coincidentally, Bowen's mom -- Cynthia Bowen -- had also moved to Austin around the same time and was fostering a young boy when Nicole Bowen felt motivated to adopt. That young boy was Briston Bowen, someone who showed an interest in music early on in life.

"He's always had an affinity for music and a love of music," Cynthia Bowen said.

So it was an easy decision for Nicole Bowen to bring Briston Bowen into her family for good.

"My mom said, 'You're going to take Briston,' and I quickly said, 'OK, sounds good,'" Nicole Bowen said with a smile.

While Briston Bowen has a strong interest in music, he also has something else: Autism.

"He didn't do a whole lot of things socially," Nicole Bowen said. "He wasn't really talking and expressing his feelings."

Music and the Mind part 2: How some Austin seniors age gracefully with music

Wanting to help him get over this communication hurdle, Nicole Bowen started doing some research and trying to figure out what programs or therapies might help. Since he already connected with music naturally, music therapy became an option she started to look into.

"At one time, he didn't even want to go outside," Nicole Bowen said. "I knew we needed to try something."

This is when music therapist Meredith Hamons entered the picture and helped Briston open up. Hamons is the founder and clinical director of North Austin Music Therapy, a treatment center that offers music therapy for seniors, people with autism and other developmental disorders and early childhood development.

"Music therapists can work with all types of people," Hamons said. "Music is the only sensory input that's processed in all areas of your brain, simultaneously."

Hamons and her organization offers both individual and group sessions, depending on what the client needs the most.

"Everything we do is music based, but the end goal isn't for the client to be good at playing the drums or any other instrument," she said. "Ultimately, music therapy is the use of music to achieve non-musical goals."

When Hamons started working with Briston Bowen, even when he was still hesitant to speak up or even talk to her, Hamons said she could tell he was a natural.

"When we first began, it was really apparent that he had incredible musical talent," Hamons said. "He started being able to fill in more and more thoughts and ideas as we worked together."

Through part of Hamons' work, she had created songs that encouraged Briston Bowen to fill in certain parts and speak up through singing or speaking. What this is doing is giving Briston Bowen a unique way to figure out how to speak.

"A way to describe music therapy is like you're trying to drive to the grocery store, and if you're driving to the grocery store, you don't really care how you get there. You're just going to drive there. If one road is closed or one road is clogged with traffic, you're going to just take an alternative route and go about your day. With music therapy, neurologically, we're giving somebody like Briston a different way to accomplish the same task."

Dr. Bob Duke is the head of Music and Human Learning for the University of Texas' Butler School of Music. He said the way music is structured and memorized can help initiate communication.

Magic or not, Briston Bowen's family can now see and hear the difference from when he was much younger.

"Now, he's talking so much," Nicole Bowen said. "Music therapy has been just a godsend for him."

Briston Bowen has also expanded what instruments he can play, which include the piano, marimba, snare drums, quads, tamborine and cymbals.

"We have no idea what Briston's potential is," Cynthia Bowen said. "To watch him -- along with the music -- progress and be able to control his emotions has just been so wonderful."

Not only has music therapy helped Briston Bowen communicate through his words and instruments, Nicole Bowen said he is interacting much more with people outside their home and making many band friends as well.

To learn more about North Austin Music Therapy, you can click here.

Here's part one and part two of KVUE's Music and the Mind series.

Part four of Music and the Mind will air Thursday morning on KVUE Daybreak.