The suit comes about two years after eight other women made similar claims against local officials. 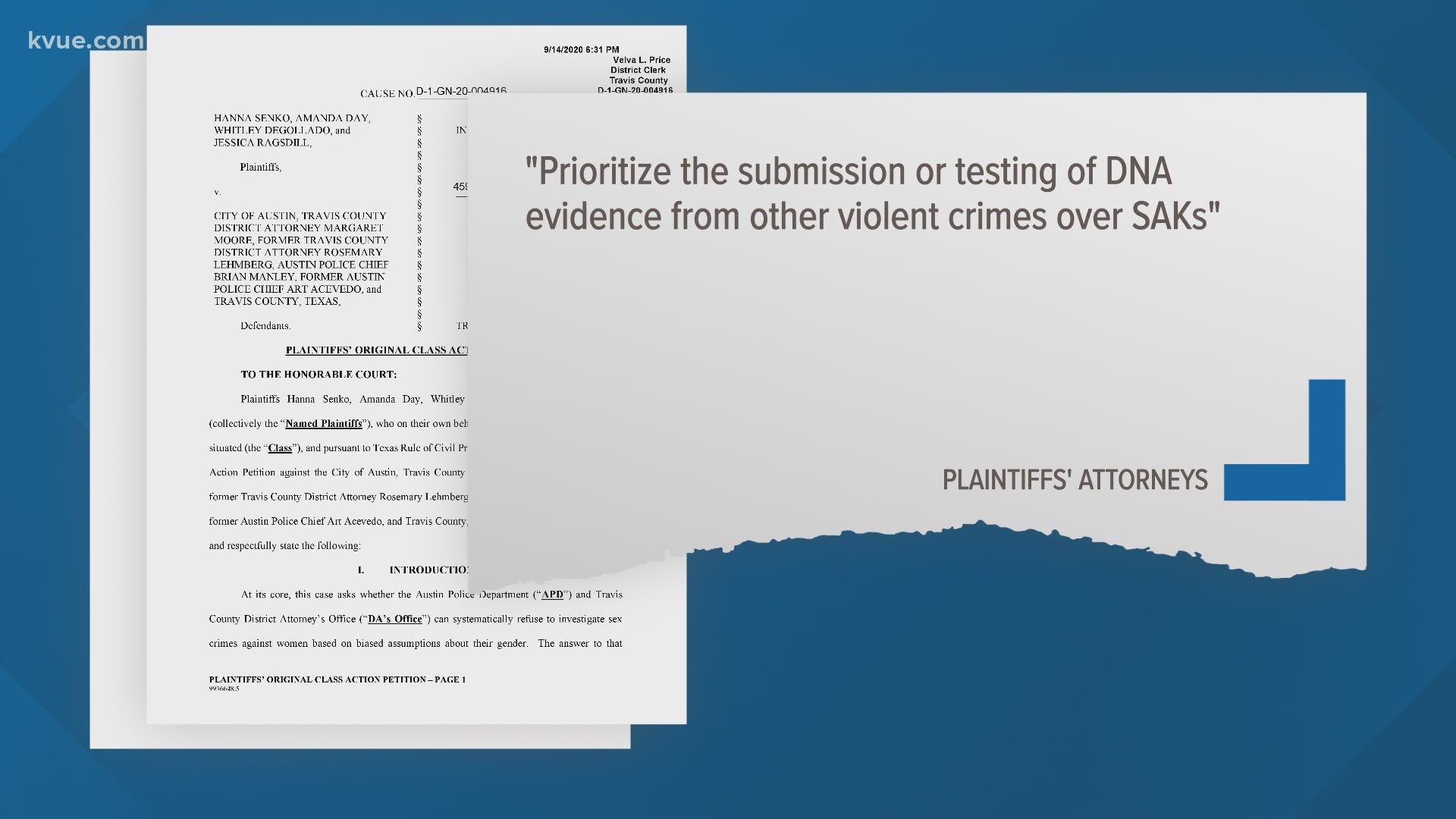 AUSTIN, Texas — Two years after eight women filed a lawsuit against City of Austin and Travis County officials accusing them of failing to investigate and prosecute their cases properly, four more women have filed a lawsuit making similar claims.

Earlier this year, a federal judge dismissed the women's case. It remains on appeal.

In the newest suit, the four women list the following parties as defendants:

"At its core, this case asks whether the Austin Police Department and Travis County District Attorney’s Office can systematically refuse to investigate sex crimes against women based on biased assumptions about their gender," the lawsuit states. "The answer to that question under the Equal Protection Clause of the Fourteenth Amendment to the United States Constitution is unambiguously no. Yet, for years female victims of sexual assault in Austin have been disbelieved, dismissed, and denigrated by the APD and DA’s Office."

The suit lists allegations such as taking years to test rape kits, officers and DAs suggesting that survivors are lying about their assaults, refusing to provide victims with access to their own police reports and case files, among many others.

"It is impossible to distill the allegations and experiences detailed herein into a succinct and singular premise, but the experiences survivors have had with the APD and DA’s Office are universal in the sense that they received little support and no justice at all from government officials sworn to protect them and the public," the suit states.

The document also brings attention to an Austin Police Association social media post made earlier this month stating that there are only 19 sex crimes detectives at the APD, meaning there are only enough detectives to full investigate and process half of the city's reported sexual assault cases

"This isn't a new issue, it’s an issue that has been plaguing the community since any of us can remember," the post says. "Our detectives are tired of telling survivors, 'I’m trying to get to your case as fast as I can.' The real solution has always been the same, adequate staffing, and now is the time to fix it."

Hanna Senko, one of the four sexual assault survivors who filed the lawsuit, told KVUE on Tuesday that she wishes it wouldn't take a lawsuit to force change.

"I really believe that if the city and the county, years ago, would have stopped and recognized that a problem exists and came forward to the table and wanted to talk about how to make it better, we wouldn't be here today," Senko said. "We can't move forward in solution and in making change until there's acceptance that a problem exists."

"As of this afternoon, the plaintiffs have not afforded us a courtesy copy of the lawsuit, nor have we been served. Therefore, I am unable to respond to any specifics. However, I am confident that this Office has consistently fought for the constitutional rights of all citizens, including sexual assault victims, thoroughly and vigorously. I expect this lawsuit to be as unsuccessful in state court as it was in federal court."

A City of Austin spokesperson also provided the following statement:

"We’re aware of the lawsuit and will respond appropriately. In the meantime, the City continues to move forward with its commitment to improve the criminal justice process for cases involving allegations of sexual assault."