Cpl. Humberto Sanchez, a 2017 Logansport H.S. graduate, was one of 13 service members killed in attack at the Kabul airport. 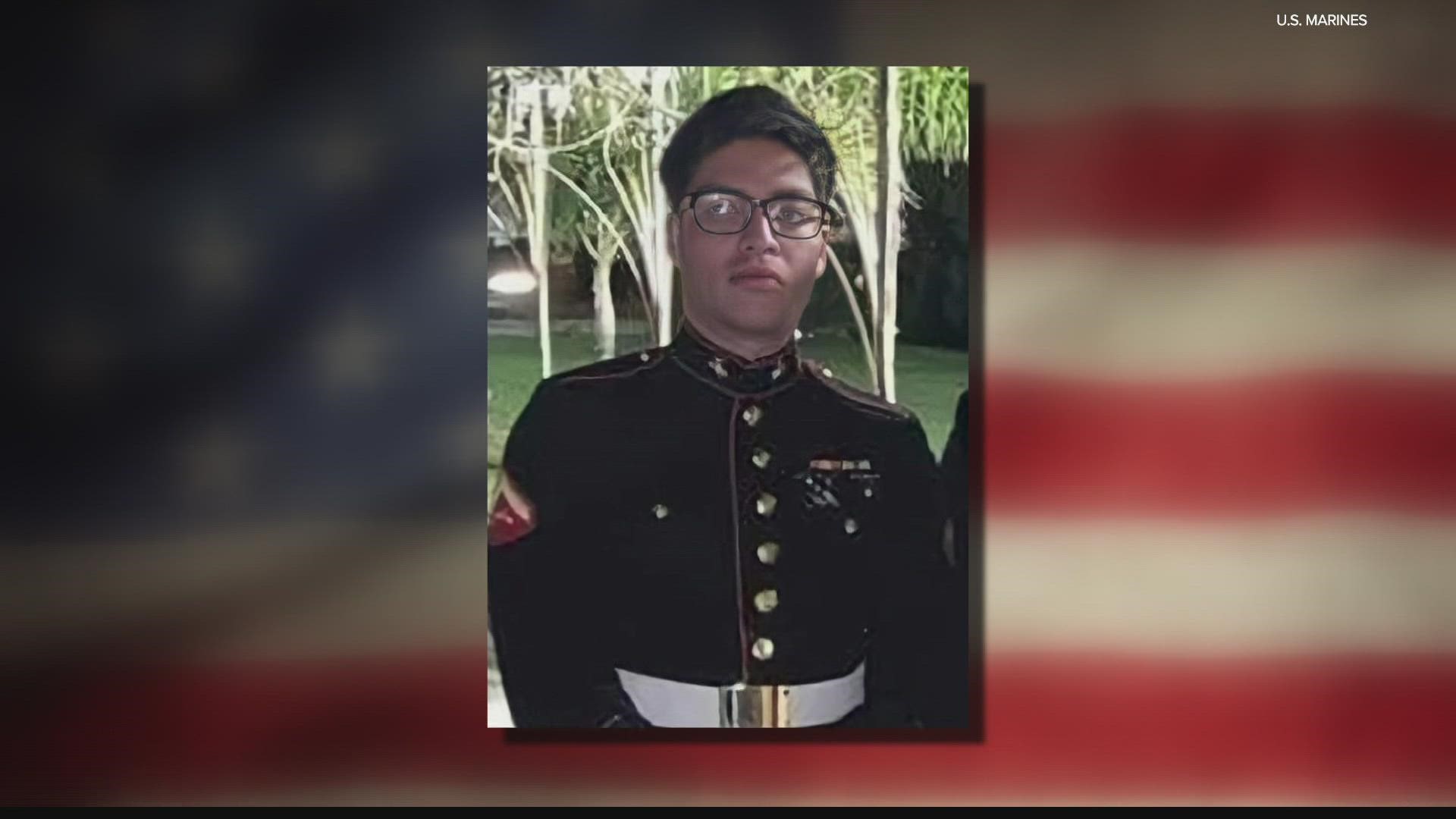 LOGANSPORT, Ind. — The body of a fallen Logansport Marine will be brought home on Sunday.

Cpl. Humberto Sanchez was one of 13 service members killed in an attack on the Kabul Airport in Afghanistan last month. He's now being remembered through art in his hometown, with a new mural in his honor.

Among the flags and signs in Logansport, saluting Sanchez, one colorful tribute stands out. It's meant to show the man behind the uniform.

"We wanted to kind of bring a little more of Humberto to the front," said Logansport Art Association President Jane Williams, "because he's more than just one of the soldiers who passed."

"I wanted to honor him and his legacy, not just him who died in the military, but him as a friend and a classmate here in Logansport," added Williams' daughter, Ali.

Ali graduated with Sanchez in 2017 and remembers him as someone who loved to help people and make people laugh, which he did easily.

"So I remember a tiny little guy, sweet big brown eyes, kind of shy, kind of feisty little boy," Williams said. "It does hit really hard when it's somebody you've known since he was little and he didn't get a chance to be very old, so yeah, it's hard."

After Sanchez was killed in the Kabul airport attack, the manager of the Logansport McDonald's, where Sanchez worked in high school, wanted to honor him.

So he asked the Logansport Art Association to create a mural at the restaurant.

"We wanted to show not just this awesome brave soldier but he was a soccer player, so we have a picture of him in the mural with his angel wings now and he has a soccer ball under his arm," Williams explained.

There's also a palette, representing his passion for painting.

The women who worked on the mural, all of whom knew Sanchez and his family, call it a work of "heart."

"Our heart was in it. Many times while we were painting, we would just sit back and look at this piece or that piece and just the tears would just roll. And they're gonna start now. I'm sorry," Williams said.

It's an emotional tribute to their hometown hero, which they hope reminds people of who Sanchez was and how much he loved to serve.

"Above all, he was so proud to be a Marine," Ali Williams said, "so putting him in that uniform and making sure that every ribbon was placed properly and that we had all the buttons in the right spot, it was beautiful to me because it was all those pieces coming together to represent who he truly was."

The artwork on the store's windows shows a pair of military boots with dog tags printed with the names of Sanchez as well as U.S. Army Pfc. Shawn D. Hensel and U.S. Army Staff Sgt. Kenneth McAninch, two other Cass County natives who died while serving in the Middle East and Afghanistan.

Another portion of the mural on Thumper's Attic shows a pair of gloved hands holding a folded U.S. flag over dog tags printed with the names of the branches of the armed forces.

Jane Williams told 13News the artwork is a show of thanks to the men and women "who serve, have served and will serve" in the military.