"I would say it's a great place to visit, but yeah, stay where you are," said Walt Neuschaefer. 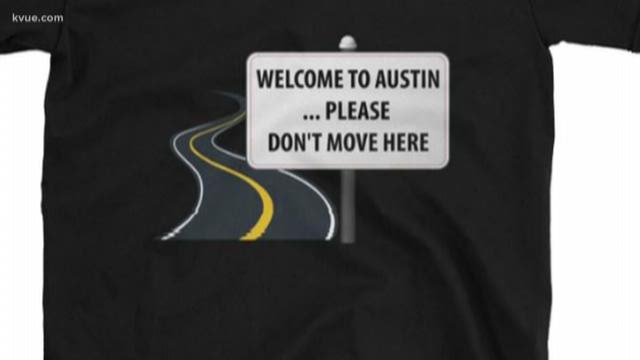 While thousands flock to Austin for SXSW to check out the latest and greatest in tech, music, and film, those who live in Austin may be ready to see them go.

In the past 20 years, the population for Austin and the surrounding area has almost doubled. Those who have already moved here said they hope SXSW doesn’t attract anyone else.

With beautiful weather, fun things to do, and a land of career opportunities, Austin can seem like a great place to live if you're visiting for SXSW.

"I would say it's a great place to visit, but yeah, stay where you are,” said Walt Neuschaefer.

He’s lived in Austin off and on since the 80s.

"Austin's really changed a lot, it used to be a lot more laid back,” said Neuschafer.

He created a blog post about the top 10 reasons to not move to Austin.

"It really kind of took off, we had like thousands of hits," said Neuschafer.

Others have agreed, by making t-shirts that say “Welcome to Austin, please don’t move here,” or a photo shopped picture that said “Do not more here.”

Local Photographer Xavier Garner told KVUE he created the photo for a laugh, but said the post took off.

"With so many people moving here, Austin has changed," said Neuschafer. "I mean, I like Austin, but the traffic really has gotten to be a nightmare.”

While the blog was meant to be silly, he said things like an increase in traffic, housing prices, and even crowds to go to restaurants and concerts aren't so funny.

"Everything kind of sells out before you can get into places, so I think it's just uh, it's just gotten a lot more crowded,” said Neuschafer.

"They move into slash build these high rise condos, they raise the prices of everything,” said Alex Strenger.

Strenger is a pedicab driver downtown and posted to Facebook encouraging other Austenite’s to discourage visitors from moving here.

While Strenger benefits from those visiting for SXSW, he's still ready to see them go home.

"Generally speaking, the people who move here from Austin like to move here after SXSW, and they move here not respecting the Austin or the Texas way of life,” said Strenger.

"Now Southby is just a zoo. They shut down the streets, its super super crowded, there are lines everywhere," said Neuschafer.

"SXSW is a great event. It's beautiful, it's amazing right, you know it really helps out the local economy, it helps me out tremendously, but I don't want every day to be SXSW," said Strenger.

SXSW will close this Sunday March 18. Austin locals will continue to hope no one signs an apartment lease soon or closes on a home in the next few days.