After over 12 hours of protesting in Downtown Austin Saturday, a rally and march were planned for Sunday afternoon. 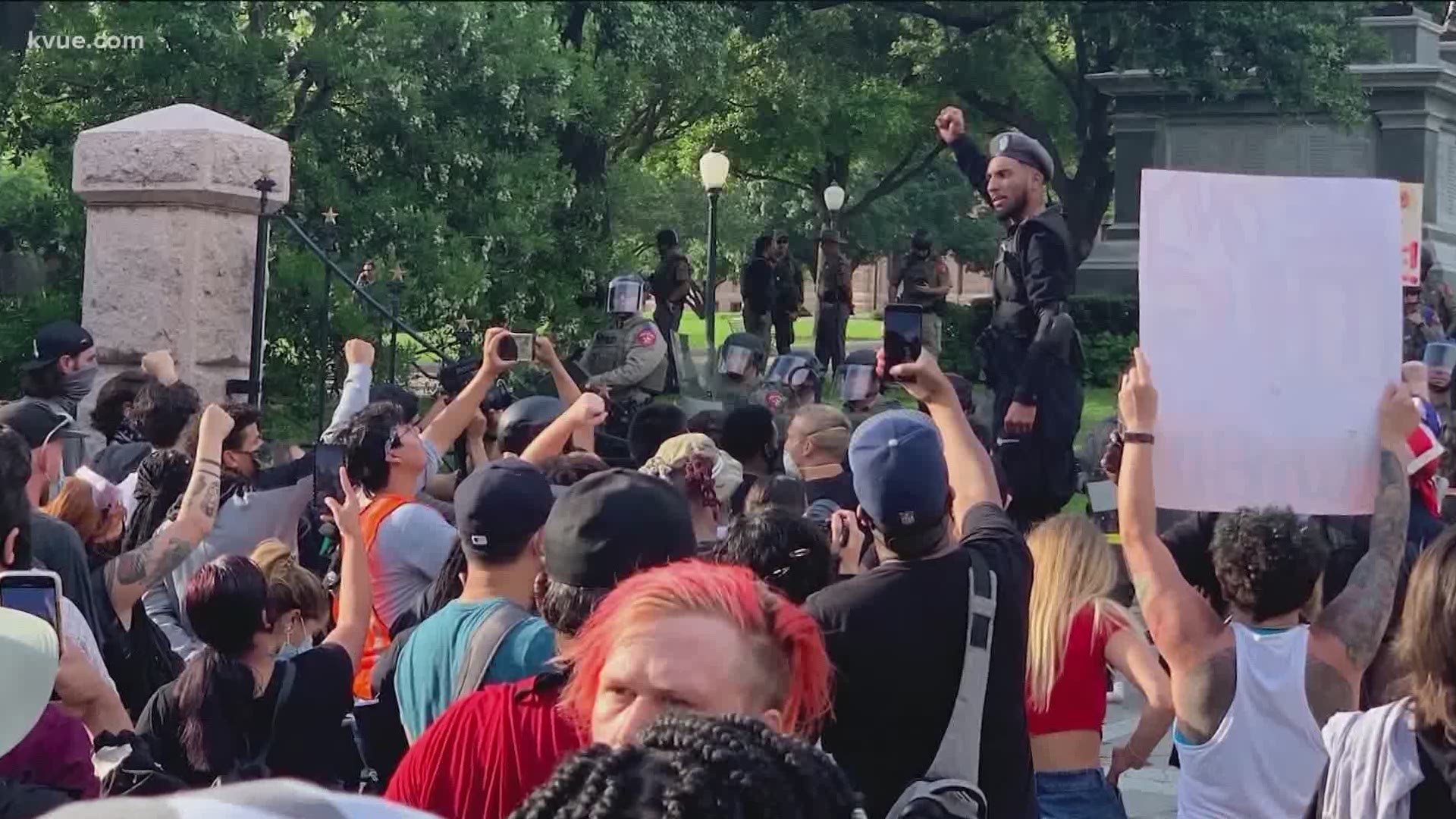 After a full day of protests Saturday, as well as unplanned protests Friday night, a rally and march was planned downtown Sunday afternoon.

On Sunday, from 1 p.m. until 4 p.m., the Austin Justice Coalition and Black Lives Matter were expected to hold a  "Justice For Them All" rally and march starting on the south steps of the Texas State Capitol and ending at City Hall. However, Sunday morning, the Austin Justice Coalition said it is canceling the event due to other, potentially violent protesters possibly "hijacking" the event.

Protesters began gathering at the Capitol around noon despite the Austin Justice Coalition canceling its march. KVUE's Mari Salazar reported that an altercation near City Hall led to APD firing rounds of rubber bullets. Some pepper spray was also deployed. I-35 was shut down twice on Sunday. The first occurrence led to APD clearing I-35 by using smoke devices and CS gas. A Target store in Capital Plaza was also looted, according to APD. Aside from these few instances, the sense of the protests throughout Austin for the day remained generally peaceful. You can watch our live coverage of the protests here.

Over the weekend, AFD said it responded to the following directly related to the protests:

11:45 a.m. – On Monday, police said they made almost 30 arrests related to Sunday's protests. These charges include burglary of buildings, interference with public duties, theft of property, theft of firearm, graffiti, engaging in organized crime, assault and participating in a riot.

1:46 a.m. – As the protest winds down, officers from Austin police and protesters are starting to mingle and chat.

12:17 a.m. – People have broken into the Shell Gas Station at 35 and Seventh Street, according to Mike Marut.

11:40 p.m. – Protesters are setting off fireworks again tonight, but this time not under the I-35 overpass, Mike Marut reports.

11:05 p.m. – Protesters have gathered again outside of APD headquarters, according to Mike Marut.

11 p.m. – KVUE's Bryce Newberry captures an image of a person writing “No one is illegal on stolen land” in graffiti outside of Austin PD headquarters as protests enter the tenth hour of the third day.

10:25 p.m. – A woman has climbed the stoplight leading chants for the protesters still in front of the Texas capitol grounds, according to KVUE's Mike Marut.

10 p.m. – KVUE's Mike Marut reported the protests in front of the Capitol were calm during the 10 p.m. newscast.

9:30 p.m. – Austin Police Chief Brian Manley addressed the media regarding the weekend's protests. Manley said they’re calling the protests “rioting behavior.” He said all APD officers are safe, but there were some injuries over the weekend.

"This is unprecedented," said Manley. "There is only so much preparation you can do."

He also said they are doing everything they can do to give space to people who want to speak their mind.

Manley said he is not sure if the protests will slow down or stop during the workweek, but added there will be increased staffing from APD. He said they are also working to communicate with social justice groups in Austin.

Manley said his main concern for the city and department was restoring order and keeping people safe.

"What should have been a weekend of civic engagement and really a weekend of marching and speaking out about this important issue has been hijacked by others," Manley said.

8:46 p.m. – KVUE's Bryce Newberry shows images of what it looks like inside Private Stock in Austin after looters broke into the store and stole merchandise. In less than 24 hours, a GoFundMe has raised nearly $20,000.

8:20 p.m. – Austin-Travis County EMS (ATCEMS) tweeted medics had responded to eight protest-related incidents as of 8 p.m. Sunday. ATCEMS advised everyone to stay aware of your surroundings, know your location if you need to call 911, exercise caution and be safe.

8:15 p.m. – A group of protesters has gathered in front of Austin police headquarters. Video shows the protesters chanting "Whose streets? Our streets."

8:08 p.m. – Protesters moved off of Interstate 35 and were marching toward Austin police headquarters, according to KVUE's Molly Oak.

7:48 p.m. – Video shows both protesters and Austin police on Interstate 35.

7:43 p.m. – Northbound and southbound lanes of Interstate 35 near Eighth Street have been blocked off by protesters for the second time in the day. Austin police advise people to avoid the area.

7:23 p.m. – Austin police said it is responding to the Target in Capital Plaza regarding reports of looting. APD said there is a large crowd and property damage and advised people to avoid the area.

6:41 p.m. – The crowd of protesters has grown in front of the Capitol again and they're chanting "I can't breathe."

"This is a fluid situation where the safety of the community is always our priority. Smoke and CS gas was deployed to move crowds off of IH-35."

A sea of protesters are chanting and marching west on Sixth Street through downtown, according to KVUE's Bryce Newberry.

5:00 p.m. – Mayor Steve Adler joined KVUE at 5 p.m. to talk about the protests. Adler said he understands the desire to stand up and make their voices heard. Adler said he was concerned about seeing a spike in coronavirus cases in a few weeks potentially due to the protests. Regarding Michael Ramos' mother speaking in a press conference, Adler said it broke his heart to hear what she had to say about her son.

4:54 p.m. – Protesters have paused at Sixth and Trinity, very close to where the city saw looting last night, according to KVUE's Mike Marut.

3:45 p.m. –  KVUE's Molly Oak reports that protesters began lying down on Interstate 35 while others continue walking down the interstate and service roads. Oak reports that you can hear “I can’t breathe” being chanted.

***Language warning for the following videos***

3:35 p.m. – Brenda Ramos said in a press conference that Austin police officer Christopher Taylor, who killed her son Michael Ramos, should be fired and arrested.

3:32 p.m. – Protesters are on Interstate 35 service roads between Eighth and Ninth Street and moving onto Interstate 35 southbound main lanes, according to APD. KVUE's Luis de Leon had a picture of the scene.

3:07 p.m. – The mother of Michael Ramos is expected to speak for the first time on camera after her son was shot and killed by Austin police late last month.

2:45 p.m. – Tori Larned reports that Chief Manley has made an appearance at City Hall.

These efforts are in addition to the governor's actions Saturday when he deployed troopers to Austin, Houston, Dallas and San Antonio and activated the National Guard.

2:10 p.m. – Protesters are telling Tony Plohetski that their friend was hit in the temple with a bean bag from about a foot away. She is now being tended to by Austin-Travis County EMS on Cesar Chavez.

Mari Salazar has also reported that APD Chief Brian Manley is out on the scene with his officers.

1:40 p.m. – At this time, there's a sense of calm among the protesters. Some have stockpiled water and snacks near the capitol grounds to keep everyone fueled. KVUE reporters in the field say there are few if any police officers around at this time.

Meanwhile, the Austin Transportation Department has informed drivers to expect delays and street closures downtown. Capital Metro is detouring all routes away from downtown.

1:15 p.m. – Protesters are making their way from the capitol towards City Hall.

12:30 p.m. – Austin Justice Coalition Founder Chas Moore speaks to the crowd gathered outside the Capitol about why organizers canceled the event.

Protesters are gathering outside of the Capitol. Some organizers canceled today’s organized march, but people are still coming out. *Disclaimer: Explicit language is used throughout the video*

12:20 p.m. – Gov. Greg Abbott issues State of Disaster for all Texas counties due to the protests happening statewide. Under the declaration, Abbott has the ability to designate federal agents to serve as Texas peace officers.

"Every Texan and every American has the right to protest and I encourage all Texans to exercise their First Amendment rights," Abbott said. "However, violence against others and the destruction of property is unacceptable and counterproductive. As protests have turned violent in various areas across the state, it is crucial that we maintain order, uphold public safety, and protect against property damage or loss. By authorizing additional federal agents to serve as Texas Peace Officers, we will help protect people’s safety while ensuring that peaceful protesters can continue to make their voices heard."

12:15 p.m. – People are still gathering at the Capitol despite the event's cancellation.

11:50 a.m. – The Mike Ramos Brigade, the group that organized Saturday's protest, asks that people still "turn up for Mike Ramos and George Floyd, turn down for nothin,'" even after Sunday's event organizers cancel.

11:30 a.m. – The Austin Justice Coalition cancels the planned event. Founder Chas Moore says that there's no way that he can ask people to come out and "potentially have black bodies in harm's way."

10:45 a.m. – APD provides updated numbers about the arrests made this weekend, saying numbers pulled this morning indicate 14 people were arrested Saturday and five today. Charges range from robbery to assault on a peace officer and obstructing a highway.

10:40 a.m. – Though today's rally and march are scheduled to start on the south steps of the Capitol, the Texas Department of Public Safety says the Capitol grounds will be closed today. Elsewhere in town, businesses on Congress Avenue are boarding up ahead of the day's events.

10:15 a.m. – The Austin Police Association provides an explanation for why the Austin Police Department is using bean bag rounds to control crowds this weekend. The APA said, "Bean bag rounds are used to stop protesters from throwing rocks, bottles, paint and other dangerous items at Austin police officers or other people nearby."

On Saturday, the group "Mike Ramos Brigade" organized a rally in front of the Austin Police Department headquarters, which eventually spread across Downtown Austin to City Hall and the Capitol.

The day started out with peaceful demonstrations from protesters chanting and holding signs. But as the hours passed, tensions rose. Throughout the day, KVUE received countless reports of vandalism and witnessed police using non-lethal rounds and other measures to control crowds as some tried to block traffic on Interstate 35 for multiple hours.

Roads were closed and reopened throughout Saturday. All 2,100 Austin police officers were called to work and late in the evening, Chief Brian Manley said every officer would be working 12-hour shifts indefinitely, no matter their rank. Austin Fire Department crews were also reassigned to downtown.

AFD said there was one vehicle fire, nine dumpster fires and one trash fire, plus numerous smaller fires that were extinguished by law enforcement.

You can read through and watch clips from KVUE's all-day coverage of Saturday's events here.