Rick Hogge says he was going up a trail in Colorado when he fell off the edge. He thinks the fall was around 60 feet. He walked away with a scratch and a bruise. 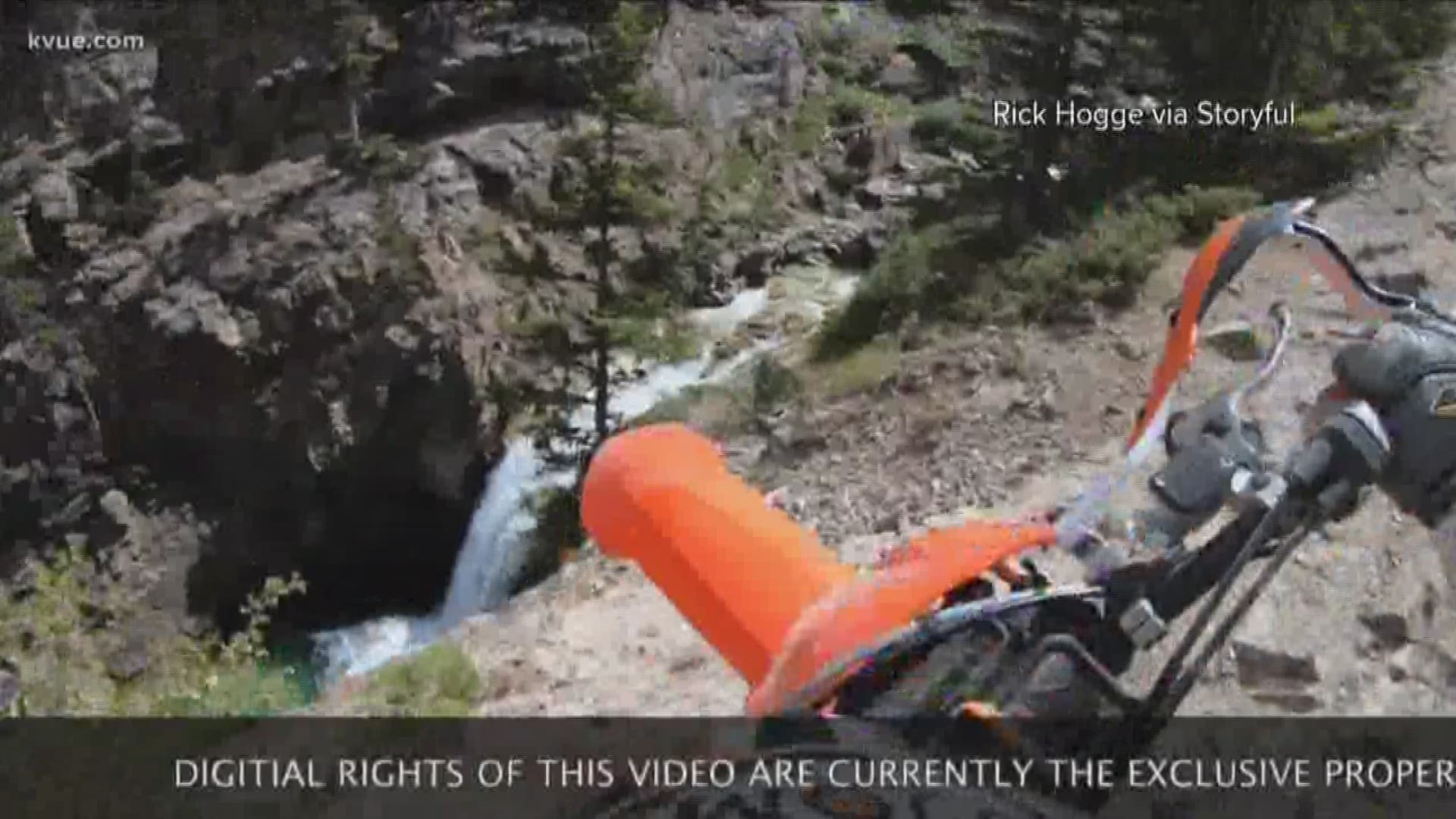 AUSTIN, Texas — Rick Hogge of Liberty Hill said he's been biking for more than 20 years. He was in Colorado for an annual biking trip with his friends earlier this month.

At one point in the trip, he said he was going down a trail near what's called Devil's Punch Bowl.

"It's pretty intimidating with the cliff right there," said Hogge. "I was very nervous about this one spot where these rocks covered the trail."

It was that one spot where video from a camera on top of his helmet catches the moment he lost control of his dirt bike and fell off the side of the cliff.

"As it shot to the left, I think it really activated the throttle, which gave it this lurch in the direction I was going, which of course was off the cliff," said Hogge. "Next there was a cry out to God and I told myself, 'This is how you're going to die,' and then I hit the water."

The video shows Hogge fall off his bike as he goes over the edge, then tumbles down for a while before going airborne, hitting a flat patch of rock, going airborne again and landing in the water.

Hogge estimates the fall was around 60 feet.

"A good friend of mine, Don, came out – he's a climber and he looked at it and he's like, 'I climbed a lot,' he didn't exaggerate, 'and I think that's probably closer to 70 feet.' So I don’t know the answer for sure," said Hogge.

Incredibly, Hogge came up from the water he fell into unharmed.

He said he swam to a ledge and eventually climbed out with help from a friend.

"Not hurt at all," said Hogge. "I had the smallest scratch and smallest bruise right here that went away the next day."

A video posted by Dave Phillips shows how the bike was taken out of the water.

Credit: Dave Phillips
The dirt bike after it was taken out of the water.

During the fall, Hogge said all he could think about was seeing his kids.

"My kids went through my mind and I bounced off of a ledge that had a pretty good angle to it and my momentum now heading off the cliff was very fortunate, or lucky – part of a miracle, for that to send me further out so I could land really directly in the middle of this water body they call the Devil's Punch Bowl," said Hogge.

He says this incident won't stop him from biking, but won't ever take a trail he's not comfortable with ever again.

"So thankful and so blessed to be here with my kids and watch them continue to grow," said Hogge.