As Lake Travis rises, here's a look at how water flows through the Highland Lakes 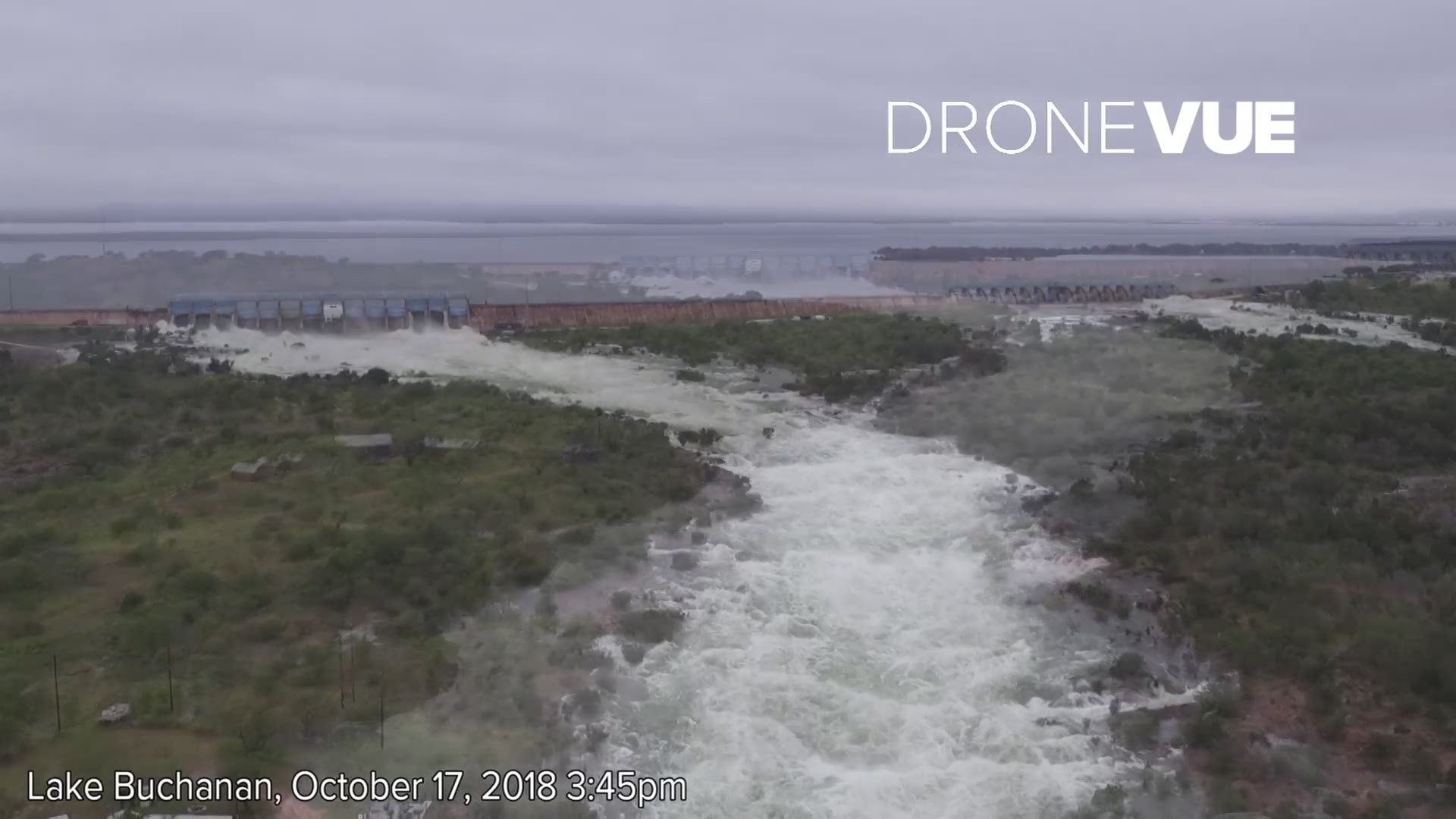 We can use the December 1991 flood as a guide of what to expect. In 1991, at 704 feet, about 50 homes were underwater at Graveyard Point. The development, "The Island," was surrounded by water. 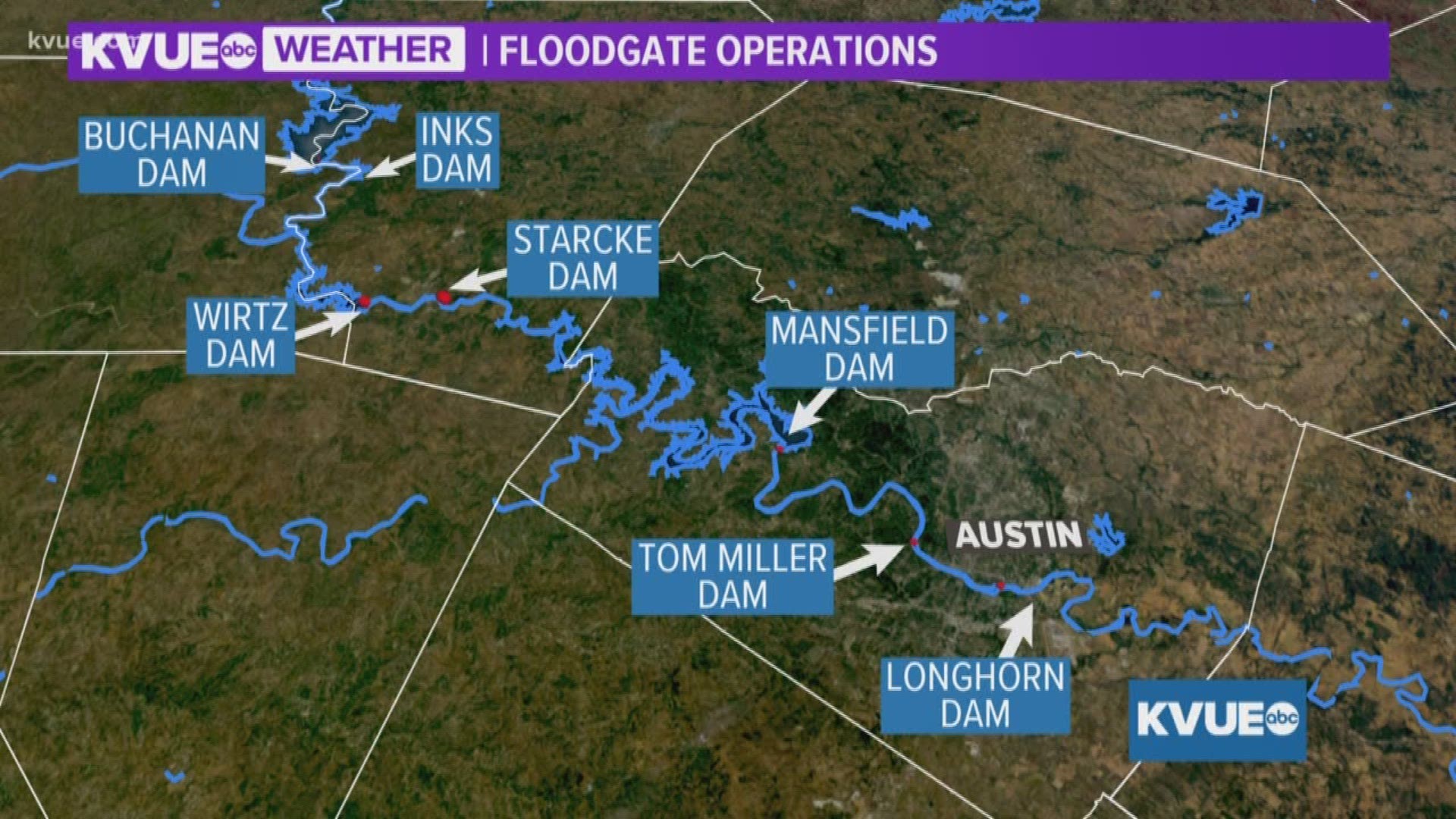 Water from Lake Buchanan moves southward to Inks Lake and then into Lake LBJ. Water is also moving into Lake LBJ via the Llano River. On Oct. 16 at 7 a.m., the Llano River crested to its second-highest height in recorded history at 39.9 feet. The following evening, the Llano River fell below flood stage for the first time since Monday, KVUE Meteorologist Albert Ramon reported.

That water then moved downstream into Lake LBJ, then Lake Marble Falls by passing through the Wirtz Dam. Water from Lake Marble Falls then moves through Starcke Dam. At times, all 10 floodgates were open at Starke. This massive amount of water moves into Lake Travis. As of the afternoon of Oct. 17, Lake Travis is at its sixth-highest height in history at more than 130 percent full.

LCRA closed the lakes Oct. 16, and they'll remain closed until further notice. Flood operations at Mansfield and Tom Miller dams began at noon that day. The LCRA said they began with the first floodgate at Mansfield Dam at noon, followed by the second gate at 2 p.m., the third gate at 4 p.m. and the fourth gate around 7 p.m.

By 4 p.m., Tom Miller dam had three gates open, with a fourth expected by 7 p.m.

That means the LCRA had flood operations ongoing at every dam along the Highland Lakes.

Starcke and Wirtz dams opened up Oct. 15. All 10 floodgates at each of these dams were open by the night of Oct. 16. On the following day, Starcke lowered that number to eight. By Oct. 18, three were partially open at Wirtz. Seven were fully open at Starcke while one was partially open.

Meanwhile, Austin Water said officials are monitoring Longhorn Dam in East Austin. All seven gates were open as of Oct. 17 evening, but by the following day they were down to six.

This comes as evacuations were underway in Llano County due to major flooding along the Llano River.

Lake Travis up 4' since midnight and could rise ~10 more feet in the next 24 hours as floodwater from the hill country moves down the Colorado River. Currently at 671', will become full at 681'.

The Lower Colorado River Authority advised residents in the Lake Travis area to take caution as it opened floodgates at the Wirtz and Starcke dams Monday evening. Officials advised those nearby to take immediate action to protect people and property.

This is all largely because of the flood that happened in the Llano River last week, in addition to the Llano River flooding again on Monday.More information is available at 1-844-523-5663 or the Flood Operations Report on lcra.org.

Click here for the flood operations report from LCRA.

Explainer: How do the Highland Lakes and dams work?