Lawsuit: South Texas man died of hypothermia due to 'gross negligence' on behalf of ERCOT and AEP during winter storm

The plaintiffs are suing for compensation of emotional pain, torment and anguish on behalf of the man's children. 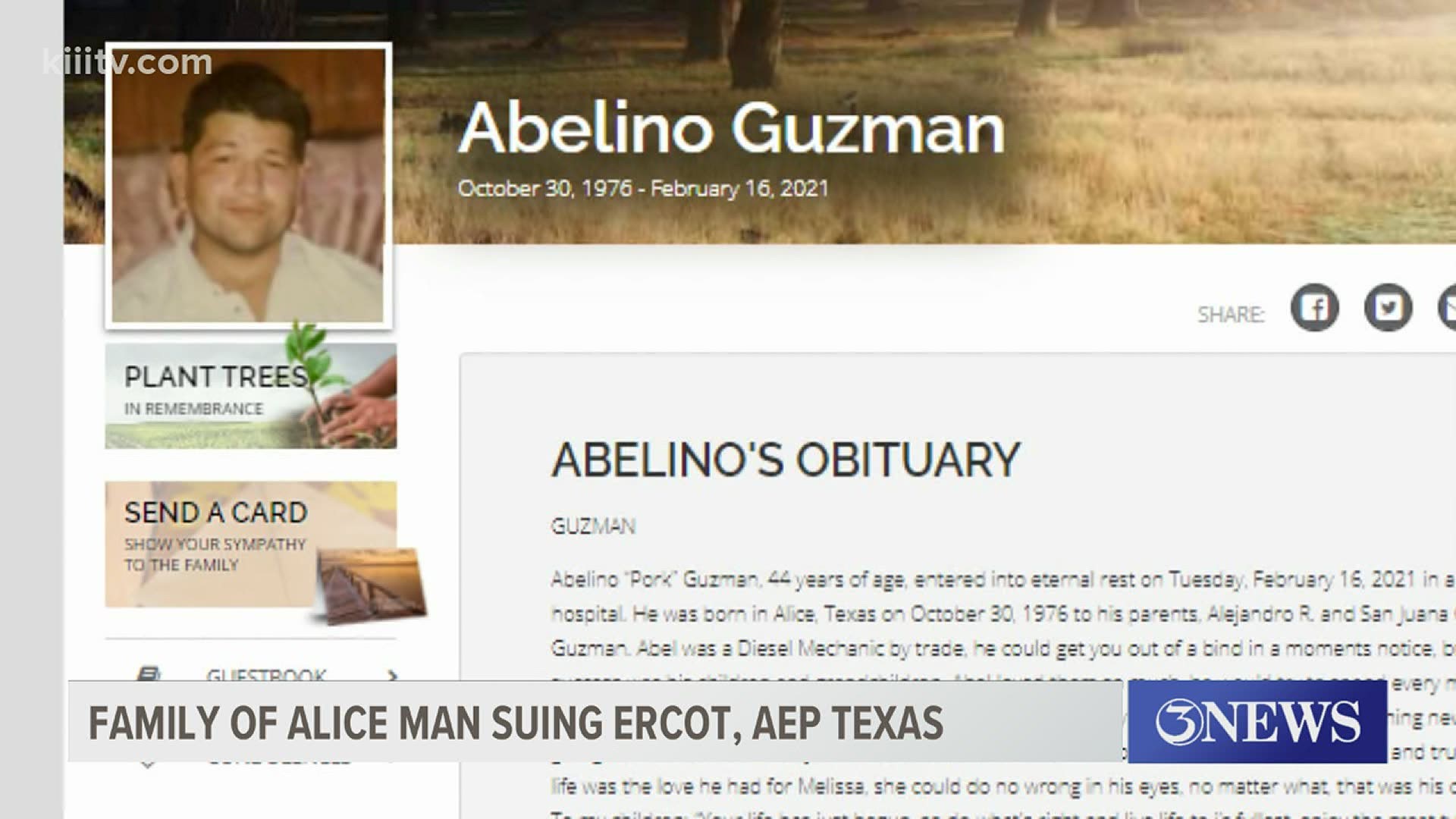 ALICE, Texas — The family of an Alice man is suing the Electric Reliability Council of Texas and American Electric Power after their family member died during the freezing temperatures during the winter storm blackout, a lawsuit obtained by 3News said.

The lawsuit claims that Abelino Guzman, of Alice, was left without power for several days and died of hypothermia.

On Feb. 14, the lawsuit states that four million Texans, including Guzman, lost power during the winter storm. The lawsuit also states that leading up to the storm, ERCOT, AEP and AEP Texas could have increased electric production capacity but chose not to do so, leading to the massive blackouts.

RELATED: There was a human cost to last week’s winter storm: 16 froze to death in Harris County

RELATED: Conroe family whose boy died during Texas freeze is suing power grid operator — but ERCOT may be protected

On Feb. 16, Guzman's girlfriend, who is also a certified nurse's assistant, noticed Guzman's skin turning blue and said he was having trouble breathing. She began performing CPR while calling for an ambulance, which was delayed by the road conditions, the lawsuit stated.

Guzman died shortly after arriving at the hospital.

The plaintiffs are also suing for compensation of emotional pain, torment, and anguish on behalf of Guzman's children.

"Mr. Guzman literally froze to death in his home which is something that should never happen to anyone," said Attorney Patrick Luff with Fears Nachawati, PLLC.

Luff is part of a legal team representing Guzman's family. Other law firms on the case include San Antonio based Watts Guerra LLP as well as Corpus Christi law firm Gowan Elizondo LLP.

"You hear some of the reports coming out from the energy companies and ERCOT," Luff said. "I think the impression you get is that this was a complicated situation that caused the power outages. In reality, the things that caused these power outages and the ways we could have prevented them were very simple."

3News reached out to ERCOT for a statement in response to the lawsuit:

EROCT responded in an e-mail that said, "We continue to review all lawsuits and have no comment at this time."

AEP Texas responded with this statement:

"We understand the frustrations and hardships faced by many customers who were affected by the outages from the unprecedented winter weather and the resulting load shed interruptions that were required of AEP Texas by the Electric Reliability Council of Texas. Unfortunately, we are unable to comment on any ongoing or pending litigation."