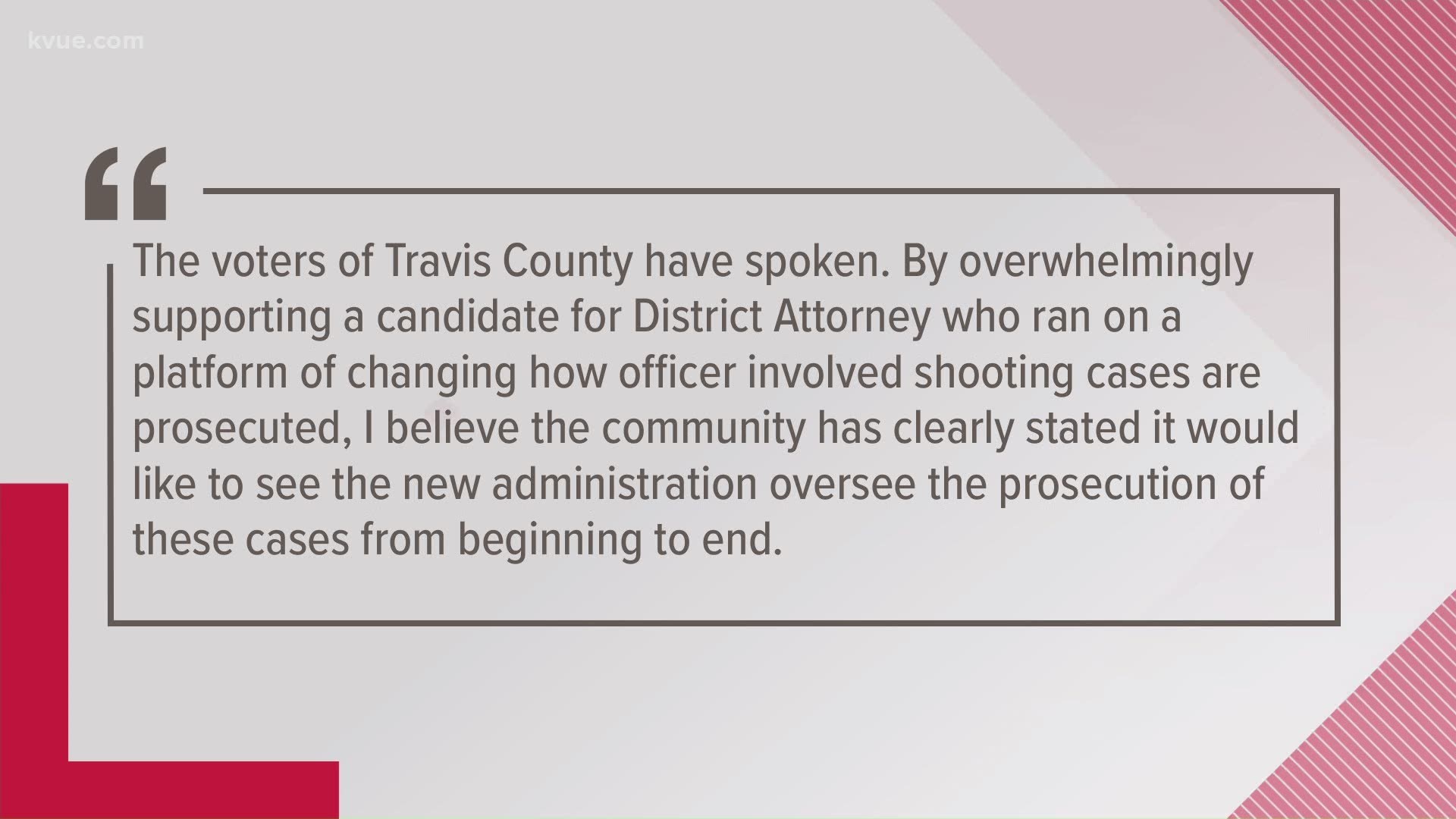 AUSTIN, Texas — A grand jury won't be looking at the cases of Javier Ambler and Michael Ramos anytime soon.

Back in early July, the Travis County District Attorney's Office said a Travis County grand jury would be impaneled on Aug. 11 and would look at the cases later that month. But now, DA Margaret Moore – who lost her bid for reelection in the Democratic primary runoff – says she wants her successor to take the case to a grand jury.

"The voters of Travis County have spoken. By overwhelmingly supporting a candidate for district attorney who ran on a platform of changing how officer-involved shootings are prosecuted, I believe the community has clearly stated it would like to see the new administration oversee prosecution of these cases from beginning to end," Moore said.

Travis County voters will choose either Democrat Jose Garza or Republican Martin Harry as the next DA in November. But whoever is elected won't be sworn in to take office until January 2021 – meaning Ambler's and Ramos's cases won't be presented to a grand jury until sometime next year.

“I look forward to fighting for justice for the Ramos and Ambler families,” Garza said Wednesday. “It will be my highest priority.”

Williamson County District Attorney Shawn Dick said he is proceeding with his portion of the Ambler investigation.

"I want to assure our community and the Ambler family that the Williamson County District Attorney's Office remains committed to seeking answers," Dick said in a statement, adding, "We will continue to assist any prosecutor in Travis County who desires to see justice is done."

In March 2019, Javier Ambler was killed while he was in the custody of a Williamson County sheriff's deputy. The deputy began chasing Ambler after he failed to dim his headlights to oncoming traffic. According to records obtained by the KVUE Defenders, deputies used a Taser on Ambler several times as he told them he had a heart condition and couldn't breathe.

On April 24, an Austin officer reportedly shot Michael Ramos with a beanbag shotgun during a confrontation with police at an apartment complex before Ramos tried to drive away. As Ramos was driving away, another officer fired his rifle at him. Ramos died later that night at a hospital. An investigation revealed he was unarmed during the incident.

Investigators in Ambler's death have also said they won't release additional footage from that night.

Moore's full statement can be read below:

“When I created the Civil Rights Unit in this office, one of my main goals was to develop community confidence in the thoroughness and fairness of the process by which we handle officer-involved use-of-force cases. The voters of Travis County have spoken. By overwhelmingly supporting a candidate for district attorney who ran on a platform of changing how officer-involved shooting cases are prosecuted, I believe the community has clearly stated it would like to see the new administration oversee the prosecution of these cases from beginning to end. We are mindful of the possible pain and discomfort to the families of Mr. Ambler and Mr. Ramos by delaying the presentation to a grand jury. We have reached out to the families through their representatives to inform them of this decision and explained our reasons for doing so. We have taken into careful consideration all factors, including the impact this decision would have on the families, and believe that it is the responsible thing to do out of deference to and respect for what can only be viewed as the community’s mandate in the recent election specifically, in relation to how officer-involved shooting cases are handled.”

Moore added that she will be directing the Civil Rights Unit to continue preparing these cases for grand jury as if they were going to present the cases themselves, stating, "these cases will be ready to present to the grand jury as soon as the newly elected District Attorney takes office.”

"A few weeks ago, for political cover, Moore claimed falsely that I was the cause for the delay in the case," said Chody. "Now, after she lost her reelection bid last week she blames the delay in the case on the voters of Travis County. Moore is allowing politics to drive the decisions of the Travis County D.A. office. This delay is unfair to both the Ambler family and to the deputies involved, who will now have to wait nearly two years before they discover if there will be any indictments in this case. In this instance, justice delayed truly is justice denied."

"We’re disappointed. The grand jury will hear the same facts whether they’re presented under Margaret Moore or Jose Garza. Delaying these cases another six months so that Mr. Garza can handle them is an abdication of responsibility and an affront to the involved participants who want a speedy resolution. If Ms. Moore had the evidence to secure any indictments, she would have already done so. This handoff makes abundantly clear that politics, rather than law, is dictating what happens to our police officer clients. That these are politically motivated prosecutions could not be made more obvious."